Today we wish CONGRATULATIONS to Mr Matt Lucas and Mr Kevin McGee who have got married in a quiet ceremony followed by a lavish pantomime themed party afterwards. 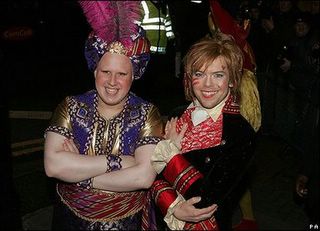 "I now pronounce you man and man," said the presiding registrar. "And/or wife and wife."

"Oh no they aren't!" came the traditional response from the audience.

"Oh yes they are!" said the registrar, formally concluding the festivities.

Gay weddings are very popular! There have been more than 15,500 weddings so far! And apparently they are even good for your health too!

Speaking of PANTOMIMES an American church in Virginia has decided it does not want to be part of the Episcopalian Church any more.

You MIGHT think that this is because they don't want to have to try and pronounce Episcopalian (I have tried and it is VERY difficult!)

But in fact it is because they do not want to have a gay bishop or a lady bishop. This means that they want someone who will dress up in a BIG PURPLE FROCK but who is not GAY or a LADY. This does not strike me as very NORMAL!

The rector at one of the churches, the Reverend Martyn Minns, came on the The Today Programme:

"We just want to get back to proclaiming the Love of God," said Reverence Mince. "And how much He hates fags!" he added.

Apparently, the person they WOULD like to have is Nigerian Archbishop Akinola.

The Reverence Mince has done quite well out of this, as his new boss has promoted him to Bishop. (Obviously, in ECCLESIASTICAL CHESS it is bad news to be promoted to QUEEN!)

Bishop Akinola has a bit of a BEE in his BONNET (or MITRE as churchgoers call it) about BANNING GAY PEOPLE. It is rather important to him, as he makes clear in his address to the nation in February and again – even more prominently – in September.

The Bish calls this getting "back to basics" of Bible study.

(Now, where have I heard THAT phrase before?)

Nor is this just some selfish little dog-in-the-manger "only OUR marriages are PROPER marriages" type of legislation. These are the things that the SO-CALLED CHRISTIAN ARCHBISHOP thinks you should be sent to PRISON for:

(7.3) Any person who is involved in the registration of gay clubs, societies and organizations, sustenance, procession or meetings, publicity and public show of same sex amorous relationship directly or indirectly in public and in private is guilty of an offence and liable on conviction to a term of 5 years imprisonment.

(8.1) Any person who goes through the ceremony of marriage with a person of the same sex is guilty of an offence and liable on conviction to a term of 5 years imprisonment.

(8.2) Any person who performs, witnesses, aids or abets the ceremony of same sex marriage is guilty of an offence and liable on conviction to a term of 5 years imprisonment.

So don't even THINK about kissing your boyfriend!

"…if the Church is to really focus on the issues of the Bible’s teaching and the core teachings of Jesus Christ, why does this Archbishop spend so much time on human sexuality issues while so many of his countrymen and women are oppressed by poverty, illiteracy and violence?"

The American conservatives have distanced themselves from Bishop Akinola's position, arguing that he is under pressure due to tensions within Nigeria between Christians and Muslims.

(So the Bish is doing BAD but it's okay because he has all the moral backbone of a JELLYFISH in a BLENDER. Hmmmm.)

It seems that Anglican prelates are ALWAYS having to make excuses, these days!