The dilemma… or trilemma or quadlemma… that faces Mrs May is: how does she satisfy all the different Leaver’s different reasons? And of course she can’t. They’re utterly irreconcilable.

The real choice facing the Prime Minister is whether she faces down that section of the voters who will scream betrayal most loudly or she accepts trashing the economy to satisfy people who voted for magic unicorns.


Look, either you can determine all your own rules. And no one will do business with you. Or you can compromise and have trade.

So either you are batshit crazy. Or you were bullshitting when you said we would “take back control”.

People who voted Leave will give you one of a dozen different reasons for why they voted – almost all variations on the cry of “*I’m* not a racist!”.

(This refusal to admit that immigration was the big driving force of the Leave Campaign that is the sort of reprehensible moral cowardice that sees Labour’s Gisela Stewart happy to parrot the lies of Farage and Gove and then wring her hands at the entirely predictable (and indeed predicted) outcome.)

“We have valid reasons,” they say.

…Actually they mean “we have morally acceptable arguments” (not like the racists).

For an argument to be valid is has to be true:

“We should make our own laws”, is one of those big assertions that Leave say won them the campaign. It gained a lot of traction in the referendum. And it’s total nonsense.

The law must apply equally to both sides in any agreement. Like, say, a trade treaty. If one side is going to say they can change the law (possibly on a whim) what is in it for the other side?

Suppose your next door neighbour says that they should make up the laws that govern their house. And they decide they don’t agree with those pesky laws about noise after midnight. Or fly tipping. Or that property is theft?

That’s just the same as when we get, say, UKIP’s Suzanne Evans (on Radio 4’s Westminster Hour) saying we don’t need follow the rules in Article 50 at all; we should just change the law in our own Parliament to leave. Reneging on the Lisbon Treaty would mean that no country on Earth would trust us with those “free trade agreements” that the likes of Ms Evans say it will be so easy to make.

There’s a section of the Leave vote who might be completely happy with that, with no trade with Europe at all. For them, the only satisfactory outcome will be to slam the door to the EU on our way out.

It’s probably not a large section, but you can bet it’s going to be a very, very noisy one.

And they are never going to be satisfied. Because that sort of isolationism is not going to be acceptable to anyone who wants to be able to buy bananas or avocados or for that matter petrol.

For absolutely anyone else, anyone who wants to be able to buy things from abroad and sell our stuff there too, then you are going to have to compromise. Starting by agreeing on the law – the rules – for your treaty.

What you cannot get is the completely disconnected from reality version where we want lots of trade with everyone… but they all agree to follow our rules, the sort of magic thinking represented in the Cabinet by “Fantastic” Dr Fox, the man already picking a fight with the empty room that is Boris Johnson’s Foreign Office.


Two months have passed since THAT vote. The Prime Minister has been able to take a holiday. Labour continue to stage their what can hardly be called leadership election. And thankfully, neither the World nor the British economy have ended in the meantime. In fact we have had positive economic figures for July: retail sales are up and unemployment is down.

But it’s early days. We haven’t actually done anything irreversible yet. It’s still difficult to see how we will not get a spike in inflation caused by the fall in the value of the pound – particularly once fuel bills start to go up in winter. And it’s an awkward question but where is the investment in jobs and trade going to come from, now that companies are looking more to the continental mainland for their European bases?

So far, Theresa May is Wile E. Coyote, running on empty air. We need to know whether what she’s got in her handbag is a parachute… or an anvil. Ideally before she looks down and notices the economic gravity. 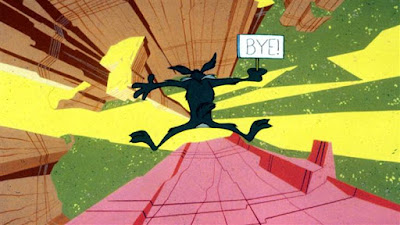 We don’t want a recession. So what are the government doing to prevent a bump in the road turning into a shock to the system? Things have changed (or the vote was meaningless Miranda Hart look) so the government needs to say what changes it will make in response. Complacency and inertia won’t look so good with hindsight if things do go pear-shaped.

Posted by Millennium Dome at 8:13 am No comments: