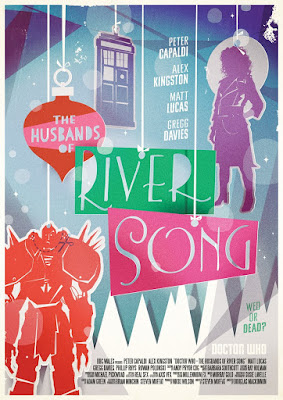 Time can be rewritten. And so can Doctor Who Christmas Specials. The human colony of Mendorax Dellora, as charming and Christmassy a redressing of the sets from “Face the Raven” as you could ask for, feels a lot like a return to earlier Moffat Christmases, whether Sardiktown in “A Christmas Carol” or the town of Christmas in (shudders) “The Time of the Doctor”; the crashing spaceship is reminiscent of the also-meteor-struck Titanic in “Voyage of the Damned” or more apropos the crash of the Byzantium in “The Time of Angels” or Amy and Rory’s honeymoon liner in (again!) “A Christmas Carol”. Crashing spaceships are the new “I Wish It Could Be Christmas Every Day”. You start to get the feeling Mr Moffat’s doing this deliberately.


Steven Moffat, the Grand Moff, has always treated the story of Doctor Who as a palimpsest, even his own works, going back again and again to re-write and over-write what has been before. And always, it seems, to reject closure. He’s never happy to just live with things that end. Even his most famous killer monsters, the Weeping Angels don’t kill – they send you back in time for more life. He’s going to be inconsolable when he has to finally hand over to Chibnall. He’s forever reaching for that get-out clause, to – as the Eighth Doctor might put it – hold back death. Whether it’s rewriting the end of the Time War to save Gallifrey, or going literally to the end of all the Worlds to snatch an endlessly extended extra moment from Clara’s death.

This time he even has his own creation, River Song, accuse him of doing it:

“There’s always a loophole. You wait until the last minute and then you spring it on me. […]
But you will. You'll wait until I've given up hope. All will be lost, and you'll do that smug little smile and then you'll save the day. You always do.”


The life of River Song was always bounded by the fact that it ended where it began back at the Library. Even then, he wouldn’t let her go, giving her a cyber-heaven to inhabit. OR even come back from, in “The Name of the Doctor”.

And he does the same thing again here, giving River and the Doctor one last night together, at the Singing Towers on Darillium… and then teasing it out to twenty-four years. Eventually we’ll have to stop renewing and just return!

In a way, though, it is very Doctor-ish, to keep cheating death, tricking his way out of death.

But you only get a commendation for reprogramming the Kobayahi Maru the first time.


Having said all that, the opportunity to do a screwball comedy across time and space with two of the finest actors working today, written by an author with genuine talent for farce, does kind of make the exercise worthwhile.

All the time they are on the screen together is delightful. Their timing, their chemistry, their obvious enjoyment of the fun they are having.

I’ve never been that taken with Greg Davies, nor the brand of shouty acting that he’s been asked to deliver for the role of King Hydroflax here. Like someone who’s seen Brian Blessed but not understood the subtlety of menace that he can bring to, say, Caesar Augustus, a role that Hydroflax ought to resemble. But, he’s actually there as a slapstick prop, a head-in-a-bag to be tossed about like the quips that Capaldi and Kingston exchange, so I was still laughing out loud at pretty much every scene he was in.

More distressingly, Matt Lucas’s as Nardole was quickly quite irritating: whiny and snivelling and just not given very funny things to do or say. Which is a shame as he’s the one returning this year, though thankfully he appears to have – somehow – got his body back.

I did, however, enjoy the outrageously oleaginous Maître D’, Flemming, played by Rowan Polonski. It’s through his delicious banality of evil that we understand that the passengers of the starship Harmony and Redemption – arrived at in a sudden plot swerve halfway through – don’t believe in harmony and don’t deserve redemption.

And Mr Scratch, River Song’s buyer – not quite Doctor Who versus Scratchman, but whose flip-top head seems very lifted from the New Adventure “All-Consuming Fire” – was very nicely sinister, in a Colony Sarf sort of a way.

But Kingston and Capaldi make a glorious double act. For him, it’s a joy to see the Doctor laughing and grinning his way through the adventure, getting to be the companion, enjoy doing the “bigger on the inside” right, and be the one who knows more than River, just this once. For her, there’s such a range of new and different facets of the character to portray: the lies within lies, or perhaps it’s not lies, it’s acting. When we first meet her, she’s playing Darth Vader, sweeping down the boarding ramp in flowing cloak; then she’s role-playing devoted wife – and so over the top we’re sure she’s not very good at it; then it’s the cold assassin, plotting a decapitation with whom she assumes is a pliantly complicit barber-surgeon; then she’s heroically angry with Hydroflax the butcher for his theft from the Halassi of the diamond that’s stuck in his cranium… and that’s all in the five minutes on board the joyfully retro flying saucer (nice that King Hydroflax can accessorise his spaceship and his robot body, by the way – though I suppose he does have plenty of cash…)

What River’s acting does – and the Doctor notes this when he asks “Is this what you’re like when I’m not about?” – is to flag up the way this story is about different perspectives.

Hydroflax, for example, on the one hand he’s worshipped by millions; on the other he’s loathed as a monster; or the Doctor just thinks he’s a moron; and in the end his own robot body decides he’s just rotting meat.

The passengers on the Harmony and Redemption: are they innocent travellers, as we at first assume? Or are they killers and planet burners, as River tells us? Or are they a cult of Hydroflax followers as they reveal themselves to be?

Even the diamond, the Halassi Androvar, the McGuffin that drives the plot, to the Doctor it’s just downpayment on a dinner date.

And so River herself. Which perspective of her do we take away? Hero or villain? Archaeologist or thief? Righteous or rogue? Warrior or wife? As many faces as, well, as she has husbands.

And what about Moffat? Does he keep coming back and rewriting or is he still trying to capture different perspectives on the same ideas? When – like Big Finish – he inserts more and more stories into tinier and tinier gaps, when he gives Clara immortality in her last heartbeat, is he fishing from an infinitely tiny well or like a fractal unfolding discovering infinite regress within the snowflakes?

Does it even matter so long as it’s fun?


“Happy ever after” doesn’t mean forever, River tells us, just for some time. Perhaps it would be better put as “they lived ever happy after”. But some things even Moffat cannot rewrite.

Merry Christmas.
Posted by Millennium Dome at 2:00 pm No comments: