Theresa Mayhem says that she needs to win a General Election to be a “strong leader”.

Well, if she’s not strong enough to cope with a Parliament that will only back her 522 to 13, then she’s really pretty WEAK indeed.

She wants you to believe that she thinks the polls are wrong and that Hard Labour have a chance of winning. Which is about as credible as a promise written on the side of a bus.

After five years when the Coalition was starting to put Britain back on the right path, when inequality actually fell, and jobs and wages were coming back, we have had a Tory Government that has been all U-Turns, broken promises and backstabbing.

How is THAT “stability”?

And there was a lot of fuss over a poll saying that now people thought that the referendum got the answer wrong by 44% to 42% - missing the BIG picture that the country remains MASSIVELY SPLIT, right down the middle. And that Mrs Mayhem and the extreme Brexiteers are MAKING IT WORSE.

How is THAT “leadership”?

Do you want to give a BLANK CHEQUE to the Tories?

I mean it’s a good job Mrs Mayhem doesn’t have a record of saying one thing and then doing the other.

A STRONG leader needs a STRONG Parliament to make sure that the KEEP THEIR STRONG PROMISES.

Mrs Mayhem has caved in, again and again, to the wishes of her Extreme Right-wing backbenches, and to the whims of a handful of billionaire tax-exiles who control – unaccountably – the right-wing newspapers.

And what about that DEAL with the European Union?

How is Mrs Mayhem going to cope when negotiating with the European leaders, who are a bit less likely to roll over than Uncle “strong message here” Jezza and the supine Labour Party?

So far, in fact, it’s Mrs Mayhem who has caved in on every issue she’s tried to force: settling the rights of British Citizens in Europe before trigging article 50 (non); parallel trade negotiations (nein); Gibraltar (viva España). This does not bode well for her “deal making”.

Meanwhile, Bojo “Punishment Beatings” Johnson has been made the Old English labradoodle of President Trump: told to “sit and stay” when he was supposed to be off to Moscow; admitting that it would be “very hard not to join in” if the US wanted to fire off another volley of high-explosives into the Syrian war zone. And for all the hand-holding and the fawning Gove, Britain still got bumped to the back of the queue – sorry “line” – for the Americans to make a trade deal with the EU first.

“Take Back Control” turns out to mean “Do what Donald says (and like it)”.

If Parliament’s “meaningful vote” on the final deal is going to be, well, meaningful, it needs a Parliament that is strong and unafraid to ask questions, to speak up for ALL the different views, Remain and Leave, and the different ideas and then try and bring us back together.

That’s why you need to vote for the LIBERAL DEMOCRATS.

Don’t give in to weakness. Don’t give Mrs Mayhem a blank cheque. Vote for a Parliament that is STRONG and hold the Tories to account for their promises.

If you want DEMOCRACY to MEAN SOMETHING: support the LIBERAL DEMOCRATS.
Posted by Millennium Dome at 12:08 pm 1 comment: 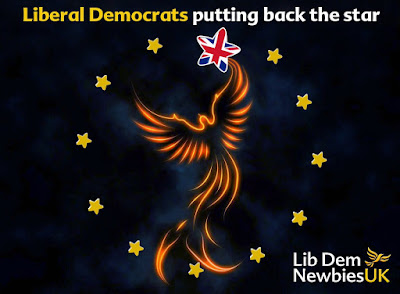 Tell them we ARE the Firebird. And we can SING.
Posted by Millennium Dome at 7:38 pm No comments: