Today was American Independence Day and to celebrate in the traditional fashion Daddy Alex has used a GIANT FLYING SAUCER to blow up the White House!

Afterwards, he took us out to TEDDINGTON STUDIOS – named after famous American President Teddington Roosevelt – to see the recording of a special television programme called "Never Mind the Republicans, Have I got News About President Barlett For You?"

This will be shown on More 4 television on the 29th of July, which is the day that they will also show the FINAL episode of "The West Wing".

Our host for the evening was the very fabulous Mr Rory Bremner who told us that he would be using the FLORIDA COUNTING method of calculating the final scores. Or "making them up as he went along" as it is called in Great Britain.

His guests for the evening sat around in a copy of the Oval Office made all the more uncanny by the fact that it was neither Oval nor and Office, included: token American STRIKER McGUIRE who sounds like he should be in Gerry Anderson but is actually in Newsweek (except when Mr Rory accidentally fired him); publicity shy Giant Liberal Democrat Gerbil Mr MARK OATCAKE (unimpressed by Mr Rory's Sir Mr the Merciless impression); and one time Dr Who ARABELLA WEIR!

[R: removes elephant from keyboard and calms him down]

Mr David was very good at the quiz and knew lots of the answers. We think that this is because he is a proper fan and knows stuff (just say to him "music by W.G. 'Snuffy' Walden"!), although Ms Arabella did accuse him of using his TARDIS to go back in time and steel her copy of the answers from the make up room!

There were several different games to play: guess which character is represented by each of these props – runner beans, baby hat, goldfish, lemon, bicycle, space helmet and so on – all delivered on a tray by a US Marine; the complete-the-quote game (with guest voice Donald Rumsfeld as Leo); or the quick-fire round where the teams had to get around the White House in under sixty-seconds.

There was a very fun game where Mr Striker and Mr Oatcake took turns to play press secretary CJ.

Mr Oatcake looked worst in the black Vera Wang, but was much better at blocking inquiry and ducking the difficult questions; Mr Striker – as a journalist – was probably less used to batting for the other side, as he was better at asking questions than avoiding them!

But our favourite round was probably the "can you walk and talk at the same time" round which used the miracle of special effects (and a treadmill) to give the illusion that Ms Arabella and Mr David were recreating those famous scenes where the West Wingers walk three times round the White House while delivering witty monologues on the state of America all without falling flat on their faces. Mr David and Ms Arabella had to answer tricky questions on "The West Wing"… without falling flat on their faces – a task make harder by the MYSTERY DIAL on Mr Rory's desk!

(What almost certainly won't be broadcast, but WAS very funny, was Ms Arabella's discourse – while being strapped into her travel mike and safety harness – on the discrete use of giant toilet rolls. DO NOT ASK! FLUFFY ELEPHANTS DO NOT UNDERSTAND!)

In the end, we do not know who won, because Mr Rory recorded TWO endings! It is just like being on the secret set of the final scenes of Doctor Who, isn't it!

With the show "in the can", Daddy Alex made us hang around for a little while so that we could meet Mr David at the stage door. 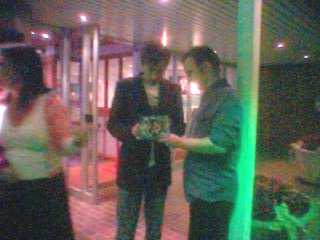 Well… I say "us", Daddy Alex and I waited at the stage door with some excited girls, but Daddy Richard went and hid in a plant pot because he is SHY.

While we were waiting, Mr Oatcake swept out, but did not stop to say hello to Daddy Alex, which just shows how UNIMPORTANT in Lib Dems Mr Oatcake is these days!

Mr David, on the other fluffy foot, was a VERY nice man and even though it was late at night he was happy to give some of his time to his fans and signed his autograph on the Doctor Who DVD that ENTIRELY BY COINCIDENCE Daddy Alex had about his person.

He tipped us off that his new companion was being announced in about an hour-and-a-half with a midnight press release, and also pointed out his newly shaved side-burns because filming on the NEW SERIES of Doctor Who would be starting on Thursday (that's July the 6th) and they had already had the first read-through.

We wished him good luck for the new season… and all the future ones too!
Posted by Millennium Dome at 11:05 pm

My envy knows no bounds...

Thanks for giving us a taste of the experience. There was a small chance that I could go to this, but didn't pursue it. Now I regret it.

On Thursday a friend of mine text me to say that Doctor Who was filming at a rooftop in Holborn, the Tardis was perched up there. Although I didn't see it with my own eyes, I got ridiculously excited to know that the Tardis was a couple of miles away from where I was. And something about knowing they have started filming next season takes the sting out of this season finishing.