Day 3403: As the Tory Panic Continues… A Hung Parliament Means Parties having to "Make Agreements" – isn't that what Parliament is FOR?


You'd almost feel SORRY for Mr Balloon's Conservatories, seeing their carefully laid plans of "wait for the electorate to drop power into our smug, entitled laps" all fall to pieces at the first whiff of people getting a GENUINE CHOICE in this General Election.

But then along comes Master Gideon, the Boy Blunder, with another video rushed out in a fit of panic to say that if the public CHOOSE a Parliament where Parties have to work together, then the Conservatories CAN'T play nicely with the other kids.

Which is why they're not FIT to be in Government.

Nice pledge there, by the way, Gideon. 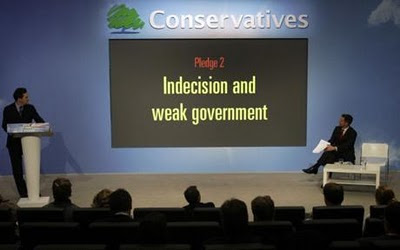 How it works: new Conservatory honesty

Maybe could have framed that a bit better, still…


You would have THOUGHT, with all the polls pointing to an even split between three Parties (in votes if not in gerrymandered seats) and with public opinion registering in FAVOUR of a BALANCED Parliament for a change… and for CHANGE… that the Conservatories would be willing to take that on board.

After all, this is their "Big Society" accepting their "invitation to join the government" and telling them just how they want to contribute.

Apparently, the Conservatories are now the Party of NO CHANGE, and the people can only have their say if they say what Mr Balloon wants to hear.

Isn't it just a bit ARROGANT to be telling the voters that they're wrong even before they've had a chance to vote?

To say that if they don't get an overall majority then the Conservatories just can't bring themselves to talk to anyone ever, ever, ever seems a bit SMALL-MINDED, a bit STICK-in-the-MUD, a bit well CONSERVATIVE.

And to say that if they don't get an overall majority all their friends in the City will make everyone poor in revenge, seems a bit like, well SCAREMONGERING.

What does Mr Balloon say?

So this can't be scaremongering, right?

But enough about the Conservatories in the 1990s…

"…a vote for the Hung Parliament party is a vote for politics behind closed doors; indecision and weak government; a paralysed economy; yet another election; and very possibly, waking up on the 7th of May to find out that Gordon Brown is still in Downing Street."

Well, unless you're planning on evicting him with even more brutality that is usual, I think we all know that we'll be waking up on the 7th of May to find out that Mr Frown is technically still IN Downing Street!

"Jeremy is going to explain why a hung parliament would not bring about a new politics – in fact it would plunge us into the bad old politics of the 1970s, with horse-trading and deals behind closed doors instead of transparency and reform."

Master Gideon seems to have FORGOTTEN (or wants the rest of us to FORGET) the most recent time we had a minority government: under Mr Major-Minority.

Of course THAT happened because the "behind closed doors" politics that goes on INSIDE the Conservatory Party broke down and a bunch of Europhobic wingnuts walked out.

We have "behind closed doors" politics AT THE MOMENT, and to suggest otherwise is so stupid as to be DECEITFUL.

Or is Master Oboe going to let us all in to the Conservatory HQ for planning meetings?

"Behind closed doors" is what lets politics WORK – we have to give people a place to make compromises and change their minds or we end up stuck in fossilised positions based on dogma rather than what the country needs. And THEN you get 12% interest rates and the pound crashing out of the exchange rate mechanism. Perhaps Master Gideon should ask Mr Balloon about THAT.

But no… the USUAL Conservatory SCARE TACTIC of going back THIRTY YEARS to the Winter of Discontent having suddenly become OBSOLETE, they're now going to go back THIRTY-FIVE years to the first election of 1974. Or possibly the SECOND. Mast Gideon seems confused as to which resulted in a Hung Parliament and which was followed by a five year government.

(Remember, people voted for an Old Labour majority in the second one. A TINY one, for sure, and it got frittered away – and let's just not get into the antics of Mr John Stonehouse right now – but it was a majority when people VOTED for, in spite of what Master Gideon seems to claim.)

"…let me say something about the very real risks that a hung parliament poses for our economic stability and prospects for recovery. We know from our country’s history that these risks can become a reality."

You know, it's a bit DODGY making your predictions based on ONE data point.

Not to mention historically and economically ILLITERATE!

The suggestion that the ONLY thing leading to economic instability in the 1970s was the weakness of the Mr Wily Wilson / Mr Unlucky Jim Callaghan government is, er, a bit of a stretch.

The Oil Shock, the Yom Kippur War, OPEC, our exclusion from the EEC, the debt crisis… and that's without mentioning the mass industrial turmoil caused by the recently-ejected Conservatory Government of Mr Grocer Heath trying to appear BUTCH.

And of course, the REAL political instability was caused by Mr Wilson having the MAGICAL POWER to call another election on a whim, or rather six months later when he thought the OMENS had turned FAVOURABLE.

This power of Royal Prerogative meant that he didn't HAVE to agree with anyone; just run a quiet minority for a bit until he could engineer a better result. A proper fixed-term Parliament would have put a stop to that.

Anyway, Gideon's asked ALL HIS FRIENDS if they like the idea of not getting complete power and do you know what? They don't!

"Today the British Chambers of Commerce published a poll of their members. Two thirds are concerned about the potential impact of a hung parliament."

Business ALWAYS worries – I'd be SURPRISED if two thirds weren't concerned about ANY possible Parliament!

Never mid that, though. Let's ask some City boys. People trust the City boys, don’t they.

"A survey earlier this month of investors managing more than £1.7 trillion of assets found that almost twenty times more respondents thought a fall in the pound was most likely under a hung parliament than under a conservative government."

Now, while it's unnecessary to point out that in English the comparison of TWO options is "more" and not "most", I really DO need to point out that since the odds of a Hung Parliament ACTUALLY happening shortened, the pound has ACTUALLY… RISEN!

I should get some new fund managers, if I were you, George.

And yet funnily enough an ACTUAL credit rating agency, Mad Eye Moody's, says that a Hung Parliament could be GOOD for the UK's economic stability, as Parties have to agree to work TOGETHER in the national interest.

As Mr Huhney-Monster said in the FT – and he should know because he used to LEAD a sovereign ratings team – there are fourteen AAA-rated counties on Earth… only one of them has EVER had to call in the IMF, and it's the one that elects its government with First Past the Port, not the ten that use a proportional system. Only one country in recent years has LOST a AAA-rating, Japan, and there they have had a majority government for a single party for FIFTY YEARS.

Mr Oboe cites Belgium as a country where the coalition has broken down. Belgium seems to be getting along fine WITHOUT a government. Arguably they're getting on BETTER without a government, interfering and legislating all the time.

He cites Italy. Italy didn't elect Mr Silvio Barelylegal under a proportional system, now did they? Mind you, I doubt Master Gideon wants to get too closely into questions of a media magnate buying the election.

Mr Oboe cites Germany… he does WHAT? If you're making the case against coalition government, you really DON'T want to be identifying the most powerful economy in Europe as a signpost of inevitable failure. The IRONY, of course, is that it was the BRITISH who design Germany's successful electoral system at the end of World War Part II. If only we'd adopted it ourselves… sigh.

"forecasts by the Centre for Economics and Business Research published at the weekend show that a hung parliament would lead to higher mortgage rates and a falling pound – even in their best case scenario."

Higher mortgage rates… could that be because an interest base rate of ½ a percent is UNSUSTAINABLY low? A rise in interest rates is INEVITABLE under almost ANY "scenario" best case worst case basket case or otherwise. It would be a boon to savers and investors, to pensioners. Nor, whisper it, is damping the mortgage market down necessarily a bad thing. Or have the Conservatories forgotten the bubble so soon?

And a falling pound? A falling pound is GOOD for exports, making our goods cheaper for people abroad to buy. Again, remember what happened when we crashed out of the ERM? Pound down, exports up, economic recovery. This really is macro-economics 101. What DOES Master Gideon think he's saying?

"Because only a Conservative majority guarantees change for the better."

Nothing, but NOTHING could guarantee NO CHANGE better than a Conservatory majority!

Anyone, ANYONE at all – even US! – saying "we want a majority" is saying that they want things to CARRY ON AS THEY ARE

A strong PARLIAMENT – a Parliament where the executive has to PERSUADE rather than IMPOSE – means a weak GOVERNMENT.

A "Strong Government" means a feeble Parliament that cannot control the executive and becomes corrupt though the whips offering advancement or peerages or government positions or "fact-finding" trips or any kind of freebies and handouts.

This is what a system BUILT on PATRONAGE and Royal Prerogative, on Prime Ministerial favour and a whips office gets you: a political system based on FEUDAL POWERS and the offer of BACK-HANDERS.

This is OUR political system, bloated, corrupt and BROKEN.

Our "First Pass the Port" voting system is NOT incidental to this – it is at the very HEART of this: the ability to grant the "favoured sons" (and they usually ARE sons and not daughters) the GIFT of a SAFE SEAT, be it a Conservatory Squirarchy or a Hard Labour City Ghetto, is the FIRST step on the road of CORRUPTION, the road of "doing favours for the Party" in return for the SPECIAL TREATMENT.

IF you want CHANGE, if you want REAL CHANGE, then it has GOT TO GO.

This is the point where the Conservatories are MOST EXPOSED as the SAME OLD LABSERVATIVES.

If you want CHANGE, if you want REAL CHANGE, then they have GOT TO GO too.


Don't give in to fear and scare tactics.

You CAN vote for CHANGE.

You CAN vote for BETTER.

You CAN vote for the Liberal Democrats.

Tories don't seem keen on making agreements it seems. So far the lib dems made sense to me. A pity I can't vote in the UK.

If you still don't know who to vote for, try the vote-u-lator: http://www.leblogdelamirabelle.net/pensees-qui-trainent-par-la/la-carte-electorale-britannique-au-tresor-the-vote-u-lator-will-find-you

But be warned, it concluded my friends and I were conservatives, so I wonder who paid for this. Come on James, admit it.