Day 3398: Clegg Bought Flip-Flops for Nazi Immigrants… ON EXPENSES! aka the Day the Press went Mad

The ESTABLISHMENT is closing ranks behind Mr Balloon, attempting to do something – ANYTHING – to block CHANGE: muckspreading on five front pages; Tell-lies-o-graph editor Mr Bendy Broken insisting "it's NOT a smear; it's NOT a smear"; Mr Roger Stavro Murdoch's son, Prince James, and his enforcer, Rebekah Oddjob, busting their way into the offices of the Independent…

The BLATANT-ness of this attempt to snatch back out of the fluffy feet of REAL voters the system that has served their VESTED INTERESTS for so long has provoked a HUGE BACKLASH as people see through the CONSERVATORY PAPERS' dirty-tricks to the PANIC underneath.

But did the Conservatories REALLY want Captain Clegg to spend all day at the top of the BBC news? AGAIN?

And what is Mr Balloon going to do about it? He promised us an ENTIRELY POSITIVE campaign… just like he promised an end to PUNCH & RICHARD & JUDY at Prime Monsters Questions… So he's GOOD at keeping promises. Not.

Is he going to DENY his attack doggies and try to appear the Mr Statesman, rising above the fray? Do they really think that that will wash?

After all, he himself used one of these smears in the first debate, saying Captain Clegg had accepted stolen money and pulling silly faces because he didn't like being reminded that the Liberal Democrats were COMPLETELY EXONERATED. 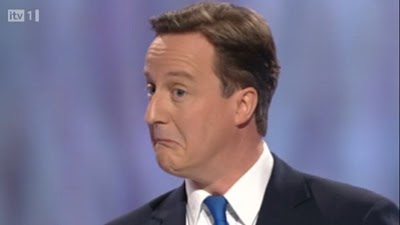 And that's what's happening with TODAY'S smears too.

The Tell-lies-o-graph: Captain Clegg did something completely allowed and – shock – was completely honest about doing it

The Daily Fail: Captain Clegg once said that we should stop mentioning the war, we got away with it once but…

At which point they mentioned the Nazis, so we won automatically.

This is going to be an election where people's votes REALLY MAKE A DIFFERENCE.

So MAKE YOURSELVES HEARD!

I am going to get my Daddies to do like Auntie Caron and write to some of the nice but misguided people advertising in the Tell-lies-o-Graph, people like WAITROSE and BEN & JERRY'S ICE CREAM and THOMPSON HOLIDAYS, people who VALUE their good name, and tell them – POLITELY – that they have DAMAGED THEIR BRAND by supporting such an obvious piece of SMEAR.

But you can also join in with the Tweeters of Twitter who have managed to make the IRONIC #nickcleggsfault the top trend of the day.

And don't forget to watch the debate at eight. It's on lots of channels, not just Sky-Bully, including the BBC News Channel and alJazeera, so you can see it on Freeview or Freesat too. Can't do anything about Sky-Bully's HIDEOUS set built out of Union Jacks, though.

It is going to be "mostly" (meaning expect SOME about these smear stories) mostly about foreign policy – so one question:

Who EXACTLY are you going to trust with the keys to the bomb?!

I believe the Express may have also suggested that Clegg had something to do with LITTLE MADDIE's disappearance.