What this country needs is an ELEPHANT in charge! 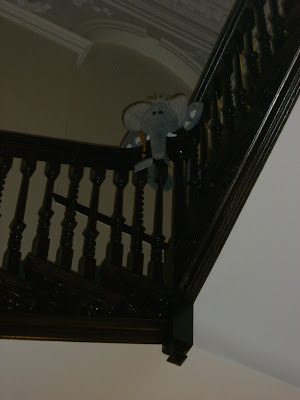 Welcome to the 2010 General Election.

Apparently I can't just be Prime Monster, but at least I can help out at Liberal Democrat headquarters, and my Daddies and I will be writing from there throughout the General Election campaign.

So how's it going?

The opening of the campaign has gone really well, with hugely positive responses to Nick and to Vince from the public and even pretty good coverage from the media.

YouGov/Sunday Times reports that Nick is the most popular of the Party Leaders – ahead of Cameron on positives AND net positives. Anyone saying that the Party leader is anonymous or in Vince’s shadow, it’s just not true and you know where to point them for the evidence.

We’re in a terrific place for the start of the campaign, and congratulations to the media team for getting us so much coverage during the “phoney war” in the run up.

What was Nick’s first campaign visit in Watford like from the activist on the ground’s point of view?

What’s it like to be in the presence of the awesome Vince?


It was a day of sunshine, scored (slightly) for the Prime Minister by one observer and characterised by journalists talking to journalists. Often being interviewed by other journalists.

Whatever happened to the days when journalists would ask politicians to tell them about their policies, rather than talking to each other about what they think the policies might be.

For many Lib Dems it was an uplifting day, at last we can get out there and make our case.

For some, though, the start of the campaign was just another day of casework, canvassing and leafleting, Lib Dems working for you all year round...

...which is shown in one developing theme in Liberal Democrat local campaigns where we have to fight and fight again to save local hospitals from Labour cuts.

So much for protecting the “front line services”.

One thoughtful piece worth drawing to your attention: Caron questions Gordon Brown’s perennial claims to have helped out the worst off through his too-complicated-to-understand tax credit system, where a third of payments go awry.

And a late surge on Twitter of interest in the welfare (and wherabouts) of the Tory Shadow Chancellor #wheresOsbourne.


View from the campaign trail:

Spirits are really high, with activists reported as enthusiastic and out and about in numbers.

We’re getting very positive responses, people coming up to our workers wanting to take our magazines, great face recognition for Vince, Nick and candidates in target seats.

The Torys are a bunch of scamps, aren’t they, with their “vote for change” stunt for the helicameras following the Prime Minister’s limo. But confidence in Cameron and particularly Osborne (has anybody spotted him yet?) fades away as you travel North.

Little or no sign of Labour – has no one told them there’s an election on?

We’re going to be pushing one of our four key pledges: Fair Votes and Clean Politics – it’s the last Prime Minister’s Questions of this discredited parliament and, more importantly, it’s the Wash Up where Government Bills – like the Digital Economy Bill – can pass or fall without proper scrutiny. Liberal Democrat reforms, like a fixed term Parliament and a Parliament that controlled it’s own agenda rather than obeying the will of the Executive, would put an end to this disreputable horse-trading.

Thank you for the link. One day I'm going to write a book on everything that's wrong with the tax credits/benefits system and how the people who actually use it are treated.

That is if I can stop the steam coming out of my ears for long enough at the disgraceful way in which the most vulnerable are often treated.