Seismic events are shaking the bedrock!

For the first time in a hundred years, it is possible to enjoy clear skies over Great Britain as an enormous Paddy Ashcloud dominates the airwaves.

Oh, and a volcano has stopped planes flying too.

Mr Frown and Mr Balloon say that they agree with Nick:

we agree with Nick

More and more people are saying that they agree with Nick: 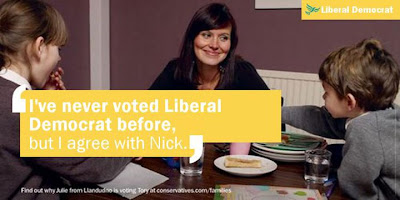 we agree with Nick too

Let's see if we can't get EVERYONE saying that they agree with Nick! 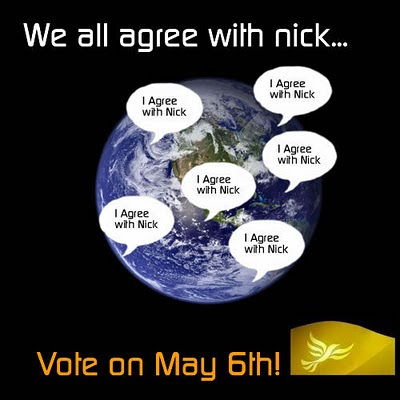 we ALL agree with Nick

Two polls, and let's not get TOTALLY crazy yet, but it is two polls and not just one rogue one, two polls - YouGov in the Sun and Harris in the Hate Mail - two polls so far say that the Liberal Democrats have overtaken Hard Labour.

That's an EXTRAORDINARY response. Even if it's only a BLIP it's STILL extraordinary, and shows that people are CRYING OUT for someone to make a difference. People WANT to agree with Nick!

So what can YOU do, if you agree with Nick too?

First, you can join this INDEPENDENT Facebook campaign, and Rage Against the Election! Completely unofficial, it already has more members than the official Conservatory Facebook page! Invite your friends!

Second, why not let other people KNOW that you agree with Nick with a range of attractive tee-shirts and mugs!

And third, don't just SIT THERE - go out and help your Local Liberal Democrats to win!

EVERY SINGLE VOTE FOR A LIBERAL DEMOCRAT IS A VOTE FOR CHANGE.

After all, I agree with Nick, as well!