We have driven all the way to Sheffield, which is in the NORTH, to interview Mr Clogg with some NEW Liberal Democrat diarists.

He got a good quizzing on the economy from Mr Joe; on Barry O and the question of populism from Ms Charlotte; on the danger of protectionism in the current climate from Mr Jonathan; and on appealing to Labour voters; and what, if anything, counts as Conservatory territory by Mr Mat. 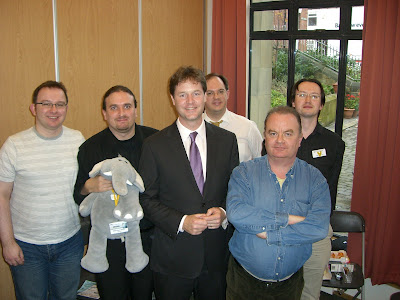 Mr Clogg's answer to MY qestion: our very own Dr Vince "the power" Cable. Very generous of him considering the way he batted aside rumours that Mr Frown might sack Sooty as Chancellor and offer the job to Mr Vince.

What we thought afterwards was how much more CONFIDENT Mr Clog has gotten in his role as leader, clearly feeling able to knock back questions rather than trying to circumnavigate very issue by thinking aloud, and determinedly holding his own against, er, ROBUST questioning from Daddy Alex. He also seems to have gained in VIM, positively bouncing around the conference venue, quite rightly slapping Daddy's wrist for DRIVING rather than taking the TRAIN to Sheffield, and enthusing everyone! 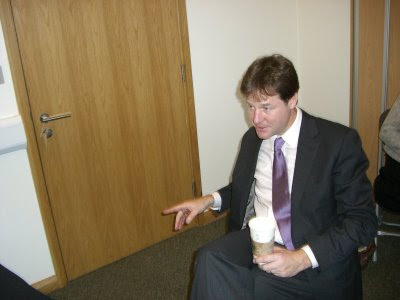 On the issue of the party's split on the Human Embryology Bill, which has apparently broken a manifesto commitment to equal treatment for lesbian mothers and thus outraged the gay community, Mr Clogg admitted that there are some issues where the leader cannot simply command, and that the Parliamentary Party had decided that, because of the very strongly held opinions – particularly RELIGIOUSLY held opinions – that it was necessary to allow a free vote on the Bill, and that it should be a free vote on ALL aspects of the Bill, as cherry picking out bits here and there to whip would be crackers. It was a difficult position to put him in, because he himself actually voted FOR the Bill, and agreed with party policy and Daddy Alex. But Daddy wasn't beating him up for fun: he has received lots and lots and lots and LOTS of messages from people saying "ask Mr Clogg about this!" and so I thought that it was IMPORTANT that he should do so.

Mr Clogg warned against treating the manifesto as "tablets of stone", and thought that they have become shopping lists that are too long.

But I do think that there is some DANGER in this. People lobby to make sure that certain policies are IN the manifesto precisely because we want to be able to say to people in groups that we support: look! here is what we say we will do for you; this is why we deserve the trust you have placed in us.

It's not surprising, then, when people ever so slightly expect us to keep our word.

Better NOT to make those sort of promises if we are later going to overlook them.


On the other fluffy foot, until Daddy Alex suggested a BETTER question about Dr Who, I WAS going to invite Mr Clogg to NOT say anything about Mr Brand and Mr Woss. So I was PLEASED that he said he wouldn't be saying anything about them.

I ALSO agree with him that it was a bit PATHETIC to see Mr Balloon and particularly the Prime Monster Mr Frown – who you would have thought would have had more important things to do at a vital summit to save the financial world – jumping on the bandwagon and joining the villagers with the pitchforks and flaming torches.


Anyway, after all that driving, Daddy Richard has unfortunately been unconscious for forty-eight hours, so I apologise for the delay in writing up out interview!

Posted by Millennium Dome at 7:55 am