Today it is CONGRATULATIONS to Mr Clogg on being elected as the NEW leader of the Liberal Democrats, with the difficult task of building on the work of Mr Power Cable.

And you can be sure we've chosen the right man for the job!

At the end of his busy day, Mr Nick made a special effort to find the time to answer a few questions from me and my friends Ms Alix, Ms Linda, Mr James and of course Daddy Alex, slotting us in between Mr Paxo and the ITN News. I bet THEY didn't give him a doughnut, though! 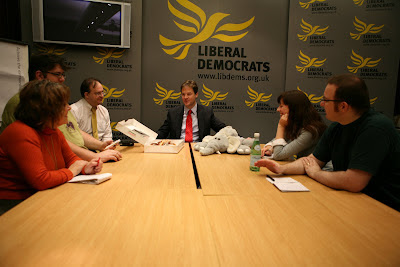 I know, you are all dying to know how he came to lay hands on my fluffy behind… but first some serious questions.

I started by asking him if he'd seen that Liberal Democrat Voice had been asking people to suggest how to spend his first one-hundred days. Perhaps it was a bit of a TRICK QUESTION, but I asked if this a hundred days business wasn't a bit SILLY and shouldn't we be thinking more about the THOUSAND days until the next General Elections?

Mr Nick did not fall into my TRAP – he was not going to be COMPLACENT. He said he wouldn't put a time on it, but he was aware that there was a window, a NARROW window of opportunity when the new leader of the third party could get to speak to people without the CYNICISM and PRECONCEIVED OPINIONS of the media getting in the way. Mind you Mr Paxo had already had a good go at him!

Was he nervous about the prospect of Prime Monster's Questionable Time, then?

No, not really – in fact he was looking forward to it, if just to get it out of the way. He thinks that politics ought to be broader than just half-an-hour of school-ground bullying in the House of Commons, but he knows that he's going to have to stand up for the Party, that he's got to carry our hopes into the battle. And he realises that sometimes he's going to make mistakes: quite rightly he wasn't going to apologise for that – he's in this for the long run, though.

Because what he really wants is to get beyond this INFANTILE approach to politics and get back to what real people really want.

Ms Alix then floated Mr Balloon – we want to go out there and really tell people that Mr Nick ISN'T any kind of version of Mr Balloon: what three things could he suggest we push to get that message across?

First, Mr Nick made one thing clear: he doesn't take seriously AT ALL Mr Balloon's offers of a "progressive consensus". A CYNICAL MANOEUVRE, he called it. How CAN you take the Conservatories seriously? Mr Balloon is ALL PR: his green ideas are environmentalism without action, his immigration policy is pretty new adjectives, but the same old agenda; he wants to talk internationalism while pulling up the drawbridge to Europe.


Daddy Richard ducked in with a suggestion: couldn't we call his bluff and ask him – if he's supposed to be a "liberal" which are the seats where he will he be standing down his candidates in our favour?

We'll be taking care of Mr Balloon soon, promised Mr Clogg: if it's not me it will be someone very senior challenging him, because it's time to show how VAPID he is.

Where IS the meat? What, for example, does Conservative decentralisation MEAN? We are the only political party that wants to devolve power over raising MONEY to local government. And without control of the money, not a lot else is very meaningful. And the Conservatories have nothing to say, and are never likely to have anything to say, about giving control away like that.

Second, Mr Nick is COMPLETELY RELAXED about comparisons between him and Mr Balloon, because as he says the DIFFERENCES are more instructive than the SIMILARITIES.

Sure, they are both MEN, and of about the same AGE, but look ate what propelled them into politics. Mr Nick's political ideals were formed at the time of Queen Maggie, he reminded us, the time of "no such thing as society" and he reacted AGAINST that bleak and heartless dogma and has struggled against it ever since. Mr Balloon JOINED that Conservatory Party!


Third, Mr Nick's ambition is for the Liberal Democrats to be a power to change politics FOR people; he has no ambition to be an annex to the Conservatory Consensus of Mr Balloon's Conservatories OR Mr Frown's Labour.

[and now, a break: more questions after I've had a sit down and a sticky bun]

Today's result was tighter than anyone imagined, but I like to see that as a ringing endorsement of BOTH candidates and a recognition that we want them UNITED! For unlike the Labour or Conservatories, this leaves us with an EMBARRASSMENT of RICHES at the top of the party, with Mr Nick strongly hinting that he will have a top job for Mr Huhney-Monster alongside Mr Power Cable as well as famous faces like Mr Charles, Captain Paddy and Sir Mr the Merciless.

Our questions and answers with Mr Clogg are set to continue – he made that clear too. Perhaps that's the most important thing that we learnt today: he REALLY MEANS IT when he says he wasn’t to do politics in a new way, and he has the ENERGY and the ENTHUSIASM to carry it through.

Good Luck, Mr Nick, my Leader! We will be back to see how you do!

Posted by Millennium Dome at 10:30 pm