Day 2539: We Love the Mister Majesterium


The Golden Compass is, of course, a COMPLETE MISNOMER. Before changing it to "His Dark Materials", Mr Philip Pullman started off calling his whole Trilogy "The Golden Compasses" referring to the Freemasonic tools for measuring as seen here wielded by Mr God in Mr William Blake's "The Ancient of Days". 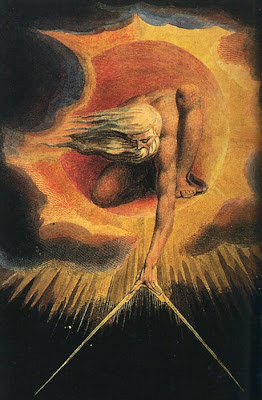 Unfortunately, the American Publisher... you know, this sounds awfully like those URBAN MYTHS about "James Bond: Licence to Kill" being not called "Licence Revoked" because American test audiences didn't know what "Revoked" meant, and that's not true at all… Anyway, allegedly, the American publisher MISUNDERSTOOD and thought that the alethiometer was a Golden Compass, as in the magnetic device for finding north rather than compassES as in the tools for describing circles (celestial or otherwise).

Bearing this in mind, it is almost COMICAL the way that at EVERY mention of the alethiometer EVERYONE keeps repeating the phase, "your Golden Compass" (as if heroine Lyra might have forgotten) to reinforce that this IS the right meaning, it is it is it IS!

Having said all that, of course, it is more STYLISTICALLY appealing for the trilogy to be "The Golden Compass", "The Subtle Knife" and "The Amber Spyglass", making each title a tool, in fact a tool of navigation (if you know what the Knife is for) that humans use to describe and explore their world and overcome the ignorance represented by submission to the Authority. "Northern Lights" is more difficult to connect to the other two titles, and indeed to the story as presented.

Oh, and as with the book, what the alethiometer (your Golden Compass!) actually is and how it works is left as an "I'll explain later". For this movie, it is treated as a magic answers machine, an oracle that only Lyra can read, providing her mystic visions in sparkly gold dust. Or Dust.

But for this movie, "The Golden Compass" is REALLY the latest go at a "big fantasy franchise™" successor to the world conquering "The Lord of the Rings". After the lamentably UNCUDDLY "The Lion the Witch and the Wardrobe" and the uninspiringly FLAT "The Dark is Rising" all hopes are pinned to Mr Philip Pullman's anti-Christ's fairy story (© all Catholic newspapers).

Let's face it, though; this was NO "Lord of the Rings". Apparently it's not done as well as hoped in cinemas – no, not because of the Catholic boycott, but just because it's not really all that good.

On the plus side, it has the very definition of a stellar cast (Mr James Bond, no less – also that tall woman who does Brain Training) and comes with the pedigree of New Line Cinema, the makers of "The Lord of the Rings". The bad news, though, is that the source material is not – as it was for Prof Tolkien – an exercise in WORLD BUILDING but in philosophical BLIND MANS BUFF. This means that pictures do not add to the building of the world so much as they take away from the thinking about the word.

Actually this is pretty much the SAME problem that Narnia had. There is was all cold and mechanical without the warm and friendly INDOCTRINATION of Uncle Clive's narration; here all is big and dumb action set pieces without the clever-clever ideas engine of Mr Philip's voice.

Where this scores over Narnia is that, while much of the plot lies on the shoulders of child actors, there are at least enough grown ups to give some stature to the show. Ms Nicole Kidman, from her first appearance, drips gold dust onto the screen. Occasionally literally. Mr Daniel is wonderfully heroic in a role – daddy Alex says – written as "Dad of Bond". Particularly the scene where he gets to do the opening of "The Spy Who Loved Me" in the snow. And a triptych of CLASSY Character Actors add menace to the Magesterium: Mr Christopher "Prince of Darkness" Lee, Mr Edward "I killed Sapphire and Steel, you know" de Souza and very much the most for Lord Derek "I AM the MASTER" Jacobi.

As junior heroine Lyra – with her own Kate Bush song, no less, though Kate is on drippy form falling short of her Wuthering Heights – is Dakota Blue Richards. (Like Joss Wheadon's Firefly, the actors' names sound MORE made up than the characters!) She is… okay. Not actually bad, but somehow not as engaging as the kids from Harry Potter (who WERE five films ago rather more ropey than this). But she's greatly helped by a CGI soul beastie who interacts with her throughout.

Spelling out that the daemons are NOT a Doctor Who adventure but in fact people's souls in the – beg pardon – soul-crushing opening info-dump voice over is one of the big departures. Rather than guiding you to work it all out, the film just drops it on you flat – which kills your interest in UNDERSTANDING. Of course, the difference between being TOLD WHAT TO THINK and WORKING THINGS OUT is one of the differences that the book is trying to make you grasp!

The OTHER major change is – like "The Lord of the Rings: The Two Towers" dumping the conclusion into the next movie. This makes for a soft as soap happy ending whereas the book climaxes with a VERY SHOCKING re-appraisal of something you thought you knew. Anyone who sees the movie and then gets the second book to see what happens next is going to be completely confused. Mind you, the second book starts off with a whole new plotline in a totally different place – namely our universe (probably) – so it's fairly boggling anyway.

Dumbing down a convoluted and intellectual story to fit into a movie format is always going to strip away a lot of material. But with all of the religious protests, you'd be surprised how much of the religious critique REMAINS.

Of course, you'd have to be a BLIND WATCHMAKER not to spot that the Magisterium is the Catholic Church reworked by Ken Adam – the mile high St Paul's Cathedral sort of gives that game away. But a kernel of the concept of WHY they are BAD is still there – other than that OBVIOUSLY they are all English Character Actors so they MUST be the baddies, this is Hollywood, after all (they might as well be labelled "The Empire" for all that they fly about in Zeppelins not Star Destroyers). Mrs Coulter spells it out: the Magisterium is there to do the thinking for people who it doesn't trust to think for themselves. Her little science project in the North does horrible damage to children but it's – in the Magisterium's warped view – for their own good.

We're a long way into "God Delusion" territory here: My friend Professor Richard says: "for good people to do evil it takes a religion."

Much of the subtext about growing up is there too: soul-daemons taking a permanent form at (never mention the "P" word) early teenage; and the mysterious substance Dust being equated in a way that is both wrong and right with "Original Sin".

Of course there are also CGI Polar Bears galore and that might get in the way of realising there is a bit more to this than an ordinary popcorn flick. Okay, so one of them is voiced by Dame Ian McKellen (and another by Lovejoy). You do have to feel a BIT sorry for old Gandalf, relegated to trying to make noble Iorek SOUND noble.

The film is filled with incident and races from place to place – from Oxford to a visually stunning London to Norway to the Kingdom of the Ice Bears to the Bolvanger Research Institute. It's all a bit too much really, because like the early Harry Potter movies (which also tried to do EVERY darned page) the effects may be stunning and the action frantic but you never really get a moment to think about what's going on or to care for the characters. Quick, race off to the next Polar Bear fight!

So, in spite of everyone being very good at what they do, you just can't turn the complex, organic development of characters and relationships that intertwine with a thoughtful plot about discovery of what all of these metaphors mean into 114 minutes of Bear on Bear action.

It might be somehow against the spirit of Mr Pullman's work, but… go read the good BOOK.

By some careful posting, er, I mean an enormous coincidence, this is my six-hundred-and-sixty-sixth diary!

Posted by Millennium Dome at 11:59 pm