You don't HAVE to be mad to leave £8.3 million to the Conservatories…


I have to admit, it was a GOOD NIGHT to be Mr Frown. The Labour managed to hold on to both of their safe seats in the by-elections, which ten years into government is easier said than done!

As Liberal Democrats I think that we must be both HAPPY and a little bit DISAPPOINTED with these results. 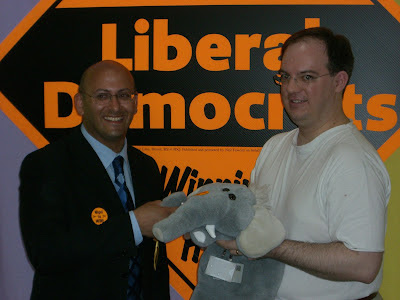 In Ealing Southall we moved into a clear second position; in Sedgefield (whatever Mr Grant Mishaps thinks) we avoided the third-party squeeze and overtook the Conservatories to establish ourselves in a good second place there too.

Clearly when it comes down to it, WHATEVER part of the country you come from, the LIBERAL DEMOCRATS are the REAL OPPOSITION.


My daddies didn't manage to take me up to Sedgefield, but I DID meet Mr Nigel, our candidate in Ealing Southall, and he was bright, enthusiastic, hard-working and a JOLLY GOOD SPORT, not above shaking hands with a fluffy baby elephant. (I am sure Mr Greg in Sedgefield was just the same.)

So I AM disappointed that they did not win.

I had thought that we were in with a OUTSIDE CHANCE – though my daddies said that it was a bit of a long shot.

Clearly, Mr Frown has learned that the BEST TRICK is to arrange to have the by-elections VERY QUICKLY, so that the Liberal Democrats do not have a chance to really get to work. The longer we have to talk to people, the more people get to hear our message, and the better we do.

Plus he has learned the Mr Blackadder lesson: if you want to win a by-elecition, get rid of Lord Blairimort before you start.

What about Mr Balloon, though? Has the BUBBLE BURST?

Conservatory responses to the results seem to range from

"Our vote share went up, but the Liberal Democrats failed to win! This is a disaster for the Liberal Democrats – finishing ahead of us just proves… er… stuff. And doing minisculely better than Mr Something of the Night just goes to show that our campaign was a success, I tell you, a SUCCESS, a TOTAL BRILLIANT SUCK-CESS!"

to the, er, less moderate

"We have FAILED in our PURITY! The GREAT SHE-GODDESS is ANGRY WITH US! Slay the pie-faced Eton milksop! Construct a GIANT WICKER THATCHER and drive the wets INTO THE FLAMES!!!"

Where did it all go wrong? Was it…

…his election GURU getting caught ASTRO-TURFING!

…his election monitors being investigated for ILLEGALLY LEAKING POSTAL VOTES!

…or his CANDIDATE turning out to have just popped in from donating almost five grand to LORD BLAIRIMORT!

Unlike last year's by-election where the Liberal Democrats came within 700 votes of winning the SEVENTEENTH SAFEST Conservatory seat in the country, Mr Balloon cannot blame the Local Party for picking a RUBBISH CANDIDATE. No, Mr Balloon picked THIS rubbish candidate all by himself!

Choosing a famous-face local; staging the defection of six, sorry, five councilors; driving around in convoys of loud-speaker cars – none of these stunts helped, because the people of Ealing saw them for what they were. Stunts.

Just trying to match the Liberal Democrats for the NUMBER of leaflets delivered does not count as a grass roots campaign.

Proper LOCAL CAMPAIGNING means listening to the local people, finding out what they want and finding a way to deliver that.

That is why Liberal Democrats CONNECT to people.


Of course, that does mean that you have to leave the office from time to time, and spending a bit less effort OBSESSING over the Internet and trying to manipulate opinion by posting comments as a SOCK-PUPPET. Perhaps one day the day will come when the blogosphere really IS as important as we all think we are… but that's a long way off yet.

Everyone online seemed to get TERRIBLY excited about Mr Mishapps and his silly deceptions… and yet the story never broke out into the "real world". Which is a shame because "MP caught out as big fat fibber" is just the sort of story that would give us the chance to fight a by-election in a Conservatory seat if any of the deadwood press had caught him out that way.

The fact is that Conservatories can call for tough laws on identity theft and at the same time (fail miserably to) pass themselves off as someone else only because the "proper" media do not think that the Internet counts.

(You will notice that leaking fibs to a "proper" newspaper has got the police investigating them!)


Still, the school holidays are here and with the political SILLY SEASON. Mr Balloon has a month-and-a-half now to crawl out of the limelight and try and stick his wounded project back together. And you can be pretty sure that he will. He will be back in the Autumn with another new RELAUNCH – too early to tell yet whether it will be more of the same policy-free NuLabour-lite stuff or the traditional LURCH TO THE RIGHT of the Conservatory Leader-in-Trouble.

Or he COULD try and come up with some policies…

Posted by Millennium Dome at 8:03 pm