Mrs Ruth Kelly, Minister for Enforcement of Religious Indoctrination, has a problem: government policy is SUPPOSED to be in favour of EQUAL TREATMENT for gay daddies (and mommies) but she does not BELIEVE in this.

So obviously she has a CHOICE – stick to her principles and RESIGN from the government or agree that religious based bigotry is NOT a central part of her faith and go along with government policy.

Of course, Mrs Kelly is not PRO-CHOICE either, so she has decided to ignore those options and get Lord Blairimort to give her SPECIAL TREATMENT instead.

This has proved very annoying for the people in Lord Blairimort's Cabinet who believe in doing what they say they will do (see them listed in the WIKIPEDIA under NAÏVE!). In particular Mr Alan "Interesting" Johnson who had previously been responsible for EQUALITY legislation and was strongly under the impression that in fact equal treatment for gay daddies had ALREADY BEEN AGREED.

But never mind that, suddenly Mrs Kelly finds that she has her sticky fingers on a SPANNER ready to stick it into the machinery of government.

What she wants is for people to be able to discriminate against gay daddies for no reason other than a four-thousand year old copy of "Rough Guide to the Sinai" says so.

Interesting example: Mrs Kelly wants hotels to be able to turn away gay daddies – will she also be checking to make sure that they do not have PRAWN COCKTAIL on their dinner menu?

So-called FAITH SCHOOLS – with their strong record of successfully bringing the religious communities together in NORTHERN IRELAND – have predictably led the protest with cries of:

Apparently, they live in TERROR that the rules could affect teaching about (SHOCK!) sex or require them to let (HORROR!) gay groups hold meetings on their premises after hours.

The Catholic Church, which – it says here – regards homosexuality as a SIN, has suggested adoption agencies would close down rather than obey.

If only it was so easy to convince other BIGOTS!

Grand Wizard: oh, well in that case we’re all just a-hangin' up our cotton-pickin' WHITE SHEETS and darn well GOIN' ON HOME!


Well OBVIOUSLY this really isn't on and I am pleased to hear that Liberal Democrat MP Ms LOVELY BURT has had something to say about it!

(Typically, Mr Balloon is waiting to discover which way the wind is blowing before COURAGEOUSLY leading in whatever direction public opinion is already blowing. This would have been a good time to DEMONSTRATE how he really meant all those things he said about INCLUSIVELY and CHANGE. Oh dear, another opportunity BLOWN.)

Thank goodness for the Liberal Democrats!

"We had always feared Ruth Kelly’s personal beliefs would make her unsuitable to be a champion of gay rights. Unfortunately these fears have become reality and she should now stand down," said Ms Lovely.

The demand for Mrs Kelly's resignation was declared to be ABSURD by a spokesperson for the woman who believes in pleasing god by hurting herself with a small metal chain of inwardly-pointing spikes worn around the upper thigh.

Meanwhile, Mrs Kelly's deputy is saying that a woman who insists on putting her religious beliefs ahead of her duty to her job is UNFIT TO SERVE.

That must have been an interesting conversation when he got back to the office!

Lord Blairimort has given his full support to Mrs Kelly. And, to be fair, to her deputy as well.

Blairimort: "I worship the little baby Jesus in the daytime and sacrifice to the devil at midnight and I see no contradiction in that." (© "If I Ruled the World")

It seems that he is as keen as ever to follow the AMERICAN lead and is now trying to introduce their VERY SPECIAL flavour of religious TOLERATION – the "you can have your faith in any colour you like as long as it's CORNBALL CREATIONIST" version of freedom of religion.

The time has come to admit that Britain has a problem with an UNWANTED MINORITY: by and large they shout very loud, demand all sorts of special rights, have their own set of "beliefs" different from ordinary folk, read the Daily Mail and think that they can look down on other people based on what colour they come in or what flavour of cuddles they prefer.

And unfortunately they run the country.

These people DESPERATELY want to hang on to power but they don't have any BETTER ANSWERS to offer you, so they just try to keep you SCARED all the time.

Every few years they come up with a new "PERIL" to victimise: at the moment it is Muslims, but before that there were the EAST EUROPEANS, the GYPSIES, the COLONIALS, the JEWS, the CHINESE, the HUGUENOTS, the JEWS again, the ROMANS, the SAXONS, the NEANDERTHALS and the CUDDLY MAMMOTHS.

"Mail on Sun Worship Day, 15th October 6000 BC. Headline: Menace Druids Demand Right to Build "Super-Henge" in Salisbury. P2 How the end of the Ice Age will affect your property prices…"

Do we REALLY want American Tali-baptist style religious influence (as promoted by Mr Karl Rove a.k.a. "Bush's Brain") worming its way into our politics?

No, of course not.

"Look, I can't… you know… give you the evidence… but you've just got to trust me on this… I've got a feeling… it just might be true!" is NO basis for making sensible decisions. Look how well it worked last time!

The Americans VERY WISELY devised the separation of Church and State and enshrined it their Constitution. In this country we have usually used EMBARRASSMENT to keep politicians from mentioning what they do on their knees at the weekend. (Sadly, our way actually seems to work better.)

The really tragic thing is that all that the Labour ministers are willing to do is row about it in Cabinet and then leak to the Observer. What a shame they do not have the BACKBONE to oppose to Lord Blairimort and his FAITH BASED INITIATIVE.

Will somebody PLEASE STAND UP TO THIS LUNATIC!


Meanwhile, since Mrs Kelly is already a member of a BIZARRE CULT and believes in greater SMITING, may I recommend that she goes the whole hog and COMES OUT as a worshipper of CUDDLY CTHULHU. 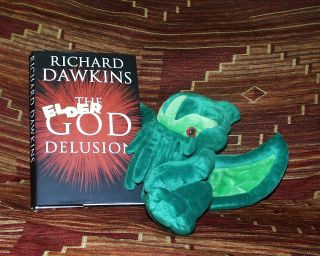 Posted by Millennium Dome at 6:59 am