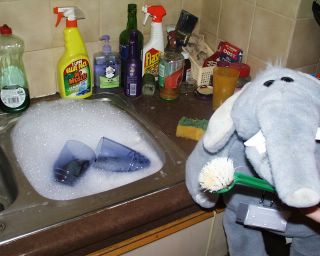 What a week it has been for Mr Balloon!

Everybody has been watching his EXCITING, INNOVATIVE and NOT-IN-ANY-WAY-ENTIRELY-STAGED new home movie: "Candy Cameron" in which cameras hidden around his million pound mansion in Knitting Hill try to catch Mr Balloon in a series of embarrassing policy lapses.

My friend Mr Will certainly thought so!

Meanwhile, my other friend Mr Councillor Stephen Tall has been trying to take my place as the FURRIEST Liberal Democrat Blogger. 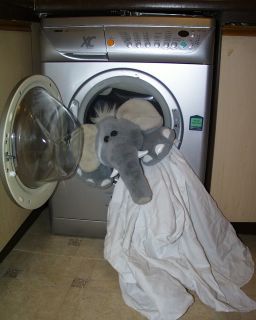 It is no good, Mr Stephen! My tummy is FLUFFIER than yours!

Fortunately, Mr Balloon has remained wise to all this and managed to avoid any hint of a policy!

Policy, for Mr Balloon, has become the hideous giant jellyfish of the week.

You know it is there somewhere under the surface, but if you let it touch you then it will bring you out in nasty boils!

As it happens, Mr Balloon has EXPERIENCE dealing with jellyfish, and once SAVED a man from DROWNING…

No, sorry, that was Lord Blairimort.

Mr Balloon saved a man from the hideous giant jellyfish of policy.

The trick, apparently, is to skim over the SURFACE with your rose-tinted goggles on and avoid anything of any DEPTH!

So Mr Balloon tried to spend the week telling us that SUBSTANCE was nothing to do with having policies and was all about building ANOTHER million pound mansion.

"First you lay out the ground, then you build it brick by brick," he told us.

Poor Mr Balloon has forgotten that you need THE BLUEPRINTS before you start putting the bricks together or it will all fall to pieces!

Also, most people do not move out of their old house before they have started any of the building on the new one!

The Liberal Democrats may change their policies in order to keep up with the changing world, but it is a smooth process of change because we are sure of our PHILOSOPHICAL BASE. We do not throw out every single policy we have ever had and then say: "well, that was what a man of substance would do!"


On the other fluffy foot, perhaps it is because he has no house now that Mr Balloon said:

It would be very sad to be without a house when the rain came down… As, indeed, the Conservatories discovered when a typhoon washed away half the enormous queue that had been waiting for some hours for Auntie Maude to give them their conference badges.

Maybe if he put some of them up in his Knitting Hill mansion, they could help with the WASHING UP!


Other people trying to RAIN on Mr Balloon's policy-free parade included the rest of his own party who were calling for tax cuts.

Mr Balloon assuaged their doubts with a polished turn of phrase:

"I believe in lower taxes!" he said, "and that is why I promise that we won't promise to cut taxes. Even though we will. And that's a promise! Why doesn't this house have any doors?"


And he was supported in this by his bestest CHUM Mr Boy George Osborne.

"We will stick to our principles!" said Mr Boy George, "specifically, the principle that we should abandon all the principles that we said we had in last year's manifesto, what Mr Balloon wrote."

The new Conservatory SLOGAN appears to be:

"Even WE aren't thinking what we were thinking!"

Mr Boy George's week was only a little bit overshadowed by GAFFES about making an autism joke about Mr Frown.

Asked if he thought he himself might be "faintly autistic" Mr Boy George said: "We're not getting on to Gordon Frown yet."

I must look up the word SEMANTICS!


Mr Balloon's conference was saved of being ENTIRELY EMPTY of substance by the Shadow Minister for Pie Smuggling, Mr Boris Johnson who managed to increase his tally of "people gratuitously insulted" from Liverpool and Papua New Guinea to include Scotland and Master Jamie Olive-oil (I am not sure whether that counts as insulting chef people or naked people).

Laughing off the embarrassing piggy-eyed buffoon, Mr Balloon dismissed criticism with an airy: "John is John!"…

No, sorry, that was Lord Blairimort, again.

IRONICALLY, Mr Boris is REALLY a very, very clever person who only PRETENDS to be an affable posh idiot in order to fool people into not noticing the way he really behaves, whereas Mr Balloon is… the leader of the Conservatory Party.

As is traditional, he finished the conference with a rousing speech, to lay out his complete lack of platform.

"I don't think that announcing policies in a rush amounts to substance," he said, adding: "by the way: let's abolish income tax for soldiers, support faith schools so long as the Muslims are forced to take 25% white kids, and don't forget my plan to scrap Human Rights! Who says we have no policies!"

Did Mr Balloon REALLY only start thinking of policies AFTER he became Conservatory leader? Did he have no idea what he wanted the Conservatories actually to DO when he was trying to get the job? Or did he just want to be leader for the PERKS?

And even if he DID, does he really take two years to make up his mind about anything?

It is a good job he is not in GOVERNMENT. Apparently, Ministers have to take decisions every day: where WOULD he find the time!

Still, at least we now know where Mr Balloon is coming from:

What a weak week, indeed!
Posted by Millennium Dome at 1:37 pm