The Nobel Prize for Physics 2006 has been awarded to John C Mather and George F Smoot, for their study of the COSMIC MICROWAVE BACKGROUND.

This is IMPORTANT stuff about how the Universe began!

"How did the universe begin?"

I think we are all taught that it began with a "BIG BANG", but in these troubled days of CREATIONISTS trying to muddy the waters, perhaps it would be a good idea to know that the "Big Bang" is NOT just some theoretical ASSUMPTION but is something that scientists called ASTRONOMERS have worked out from EVIDENCE.

The thing is, this has been considered and we have an answer: yes, the universe definitely had a beginning. There definitely was a "Big Bang" (probably around 13 to 14 billion years ago, probably a Thursday.).

How do we know?

(Brace yourself: here comes the science bit. I have asked Daddy Richard to explain it to me so this could be a big one!)

(This is known as Olbers' Paradox after Heinrich Olbers who wrote about it in 1823 and was also put forward by astronomers from Edwin Hubble back to Keppler.)

So if the universe had existed forever and ever, then the night sky would be uniformly bright.

It isn't, therefore the universe has not existed forever.

Things that are very hot – like STARS – shine because they give out LIGHT (unlike the MOON which shines because it REFLECTS light).

If you get a piece of glass called a PRISM, you can split some of the light from a shining hot object into a rainbow or SPECTRUM.

If you look CLOSELY at this rainbow, you will see a pattern of dark lines among the colours. These are caused by the elephants elements that the hot object is made up of absorbing light.

(Light is just ENERGY and the COLOUR of the light shows how much energy is in those light waves. Atoms absorb energy by moving their electrons up and down energy levels, like STEPS, in fixed amounts – this is QUANTUM MECHANICS! – and that means that only SPECIFIC colours get absorbed.)

These patterns of lines are as characteristic as FINGERPRINTS and allow us to tell of what elephants elements the hot object was made.

For example, we can tell that most stars are made of mostly hydrogen with some helium and so on.

However when we look at far away stars we some something rather ODD. The POSITION as well as the PATTERN of the lines in the spectrum is also characteristic, but when we look at distant stars although we get the right pattern, we get the WRONG position!

It appears to be shifted towards the red end of the spectrum. And the further away the star is, the more the pattern is shifted red-wards.

This kind of shifting is caused by the Doppler Effect: as an object moves away from you, waves emitted by it appear to be stretched out.

Suppose that someone is throwing you a STICKY BUN every one second. Yum yum! It takes a second for the bun to reach you and then you can gobble it up! But then they start walking away from you – still throwing sticky buns every second. Now the buns have FURTHER TO GO in order to get to you, so it will be MORE than a second before you get the next one. It seems like the sticky buns are coming more SLOWLY!

You might see – or rather HEAR – this every day as fast moving objects like CARS go past you – the sound seems higher pitched as they approach and then seems to drop to a lower pitch as they pass and move away because slower moving sound waves sound deeper. In the case of LIGHT, the Doppler Effect makes colours appear redder as red is to the long end of the wavelengths of light.

Therefore all the stars are moving away from us.

But then astronomers worked out that stars that are further away are MORE red-shifted than nearby ones. That means that distant objects are moving away from us MORE QUICKLY than nearby ones.

News about the SMELL travels FAST!

(You can see how this works in practice by drawing dots on the surface of a balloon and then inflating it, like this: 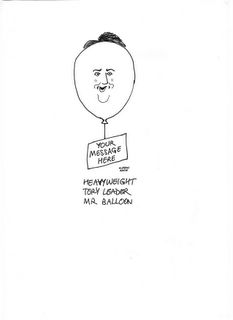 Therefore the universe, the space in which is suspended all the stuff that we can see, the space itself is expanding.

If the universe is expanding, then in the past it was smaller. Logical, yes?

So we know that earlier in the universe, things were a lot closer together. But if you squash things up together they also get HOTTER. That's how a pressure cooker works.

Therefore the universe began as a compact hot mass.

Now if there WAS an enormous hot compact mass (or a "great big explosion" to you and me) in the distant past, we should expect to see some evidence of this.

A hot body radiates heat away as RADIATION, usually light or infra-red although also sometimes the nasty mutant-spider creating kind.

In 1965 a couple of radio-astronomers in America were trying to tune their new radio-telescope and kept finding an annoying band of interference at a wavelength of around 7.3cm (which made it the sort of radio that is called microwaves). It didn't matter which way they turned the telescope, the interference was always there. At first they suspected it was PIGEONS nesting in the antenna. But no, it turned out it was a cosmic phenomenon that they called the cosmic background radiation.

Only later did anyone realise that the cosmic background radiation was a perfect match for the expected temperature of residue of a Big Bang event at time minus thirteen billion years.

You can even see the background on your television, if you tune it to between channels some of that "snow" static is caused by the Big Bang!

Daddy says that strictly speaking, the cosmic microwave background is the final scattering of photons from the time about 300,000 years after the big bang when the "fireball" cooled down enough that the superheated plasma (protons and electrons bouncing round like marbles in a tumble drier) was able to condense into regular atoms at which point hydrogen formed out of the cloud of proton/electron "gas" like droplets of water condensing out of steam (only much, much hotter!).

I have copied that down because it sounds COOL and I will try and work out what it all means later.

[R: Incidentally: just because CASTROVALVA uses the term "hydrogen inrush" does not mean that any hydrogen rushed in from anywhere!]

So there definitely was A Big Bang.

Obviously, this is only a SKETCH. There are some big questions still to be answered: questions of how it worked and did space and matter necessarily begin at the same point and so on, and how did stars and galaxies start to form after the universe of plasma turned into one of hydrogen gas.

The work of Professor Smoot on the irregularities in the Microwave Background is about working out some of the answers to where galaxies may come from.

Meanwhile, Mr Mather and his team have proved that the observations of the background by SPACE SATELLITE match the prediction of what they would look like if the Big Bang were TRUE.
Posted by Millennium Dome at 2:19 pm