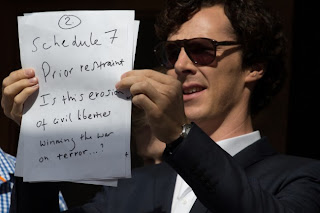 Cool as a Cumberpatch

I have to confess that I am disappointed that Cap'n Clegg's response to the detention of David Miranda and the destruction of data at the Graniad has been measured rather than robust. I can understand it - and Nick Thornton makes a good case for considering the two cases separately - but I'm still less than happy that the case for Civil Liberties has to be made by a silent protest from a famous actor when there are Liberal Democrats in government who should be doing so.

A bit less measured and an bit more Mark Pack and Julian Huppert please. And where exactly IS Jeremy Browne?

Well done old friend to Mr Nigel Booth for letter in the Graun.
Posted by Millennium Dome at 1:00 pm