Day 4599: EX-EFFING-TERMINATE or The Many Many Curses of Fatal Death 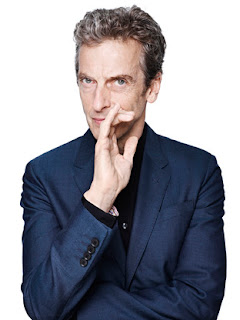 After all the rumours and speculation, we can hardly believe our luck. It can’t be him, can it? But it is!

We’re absolutely delighted. He’s a brilliant actor with a hugely exciting body of work to show it. Yes, he’s hilarious, terrifying and even occasionally worthy of pathos as Malcolm Tucker the monstrous face of modern politics’ spin machine, but go watch “The Hour”, “The Crow Road”, “Torchwood: Children of Earth”, “Prime Suspect*” or (as we did last night) “Neverwhere” for many different faces that’ll convince you of his range and versatility.

He’s been greeted such almost-Universal acclaim that I can’t help but feel for Matt Smith all over again, whose announcement was followed by a wholly undeserved backlash. Of course, Matt went on to reply to that in the best way possible: by being a brilliant, brilliant Doctor. I’m reminded of dear Carry John who suffered for a long time from no one having told her just how very, very good she was as Dr Liz Shaw. Thank goodness Peter told Matt he was brilliant straight after “The Eleventh Hour”. And Matt’s message to his successor was really sweet in turn.

It’s true that “older” is the least dangerous of the choices that the production team could have made. When David Tennant was leaving, we’d hoped that his successor would be the first black Doctor* – the name on everyone’s lips being Peter’s “Neverwhere” co-star Paterson Joseph. (Did I mention you should check out “Neverwhere”; it’s frightfully good, and Paterson Joseph’s Marquis de Carabas is frightfully Doctorish.) This time around, I did just slightly wonder if it wasn’t going to be the right time for a woman to get the role – what with the Doctor having nearly died in “Let’s Kill Hitler” and been revived with all of River Song’s regeneration energy, I wondered if that wasn’t a set-up for him to become a her.

But let us not let might-have-beens overshadow what a wonderful actor they have chosen to play the white, male twelfth Doctor.

That is, he’s the twelfth Doctor but the Time Lord’s thirteenth life. (Subject to someone explaining whatever the hell’s going on with John Hurt.) Which, according to the series’ lore, is his last life. And that lore is engrained enough in the public consciousness that the BBC news website feels the need to ask the question: “How many more times can the Doctor regenerate?”, even if they then go on to say that it’s the sort of question only “hardcore” fans worry about.

Moffat’s been there before, of course, when he wrote “Curse of the Fatal Death” for Comic Relief, and “used up” all the Doctor’s remaining incarnations in one slightly careless effort to effect repairs to the Daleks’ Zectronic device. His solution then was to – impossibly – have the Doctor regenerate one more time… into a woman. And not just any woman, either! Lummy!

Now, far be it for me to suggest that the writer of “What I Did in My Holidays by Sally Sparrow” (or “Blink” as you might know it) would repeat himself… Ahem.

I will say this of Moffat – as I said on Facebook last night – he does know how to cast a Doctor. Matt proved that already, blowing away the doubters, and now Peter will do the same again. It’s also pretty brave to hire an actor (who is also a writer and director) with the stature to stand up to the production team and say “no, we’re going to do it this way”. Tom Baker was notorious for tearing up scripts and tearing down directors if he felt they were not up to the standards he thought the show deserved. And we all know that something happened with Eccleston, even if we’ll never find out exactly what. Hopefully, though, this will be a positive challenge to Moffat and the other writers to raise their game.

The move to “movie of the week” stories has improved the focus, and the Clara story arc was much more tautly conceived and executed than the convoluted Amy/River/Silence mess, but they still need to really work on making the episodes not fall over at the end (I’m looking at “A Town Called Mercy”, “Rings of Akhaten” and particularly “The Power of Three” as examples, and perhaps “Cold War” could have been stronger, and “Hide”s off-the-wall handbrake turn would have worked better if it weren’t in a run of clumsy endings).

And how about getting some new writers in too. Perhaps, dare I say it, women writers. Abi Morgan of “The Hour”, perhaps, or even Meera Syal (who was so delighted to appear in “The Hungry Earth”/“Cold Blood”). If we can’t have a woman Doctor (yet), at least get in a woman or two to write for him.

In a way, it’s a shame that the Clara stories seem to have worked better than the Amy and Rory stories, because I do applaud Moffat’s decision to move away from the Doctor plus one female companion model that became the norm for the television somewhere around “The Caves of Androzani”. And I wonder if some or all of those nice young men that Mr Moffster has been having round for auditions might not actually be up for the role of “dashing young male sidekick” in the Harry Sullivan mode, to appease the Generation Squee crowd on tumblr who are already missing their boy-candy.

I wonder if there’s a chance of persuading John Simm that the time is right to bring back the Master? There was always a – perhaps unwarranted – sense that Matt’s Doctor would have been slightly… odd taking on Simm’s Master; but Capaldi going toe to toe with Simm, now that would be a sparring match worth seeing.

(Although Alex’s suggestion is for Peter to play both roles, Doctor and Master, distinguished only by keeping his Cardinal Richelieu beard of evil. Of course, Clara would ask why they look like each other, which each would feverishly deny…)

Will be interesting to see if they bring back Kate Lethbridge-Stuart too, as that would be another good pairing.

And I know it’s wrong – what with her moving farewell in “The Name of the Doctor” meaning it would be fair to let River’s story now be over – but I do just slightly want to see how Alex Kingston and Peter might spark off one another too.


What I particularly hope for is – and perhaps he hinted at this when he entered clutching his lapels – a Doctor who takes William Hartnell as the model, rather than Pat Troughton. Don’t get me wrong, Pat’s performance is lovely, and it’s rightly said made regeneration work and so made it possible for the series to continue. But Matt, Sylv and Peter have all cited Pat as their inspiration before now; it would be nice to see someone bringing back some of the original Doctor’s performance: authoritative, a bit scary sometimes and very funny at others. A Doctor who was more often intellectual, but could be surprisingly physical when the need called. And who, at least half the time, is plainly bonkers. Pat’s anarchy is oddly safe; he’s a great one for taking down monsters. But Billy is truly dangerous.

Most of all, I hope that Moffat will write the twelfth differently to the eleventh (and tenth), and that Peter will deliver a different style of performance to the “I’m the cleverest lifeform in the room” babble that has characterised both the last two incarnations.

Anyway, it’s a great piece of news, a terrific choice, and I look forward to the next couple of years’ Doctor Who because they’re sure to be a hell of an interesting ride.

Or as Malcolm Tucker would say: hold on to any glands you’re particularly fond of ’cos this is going to be one effing hell of an effing interesting ride.

*PS:
It’s not my fault the ITV shop doesn’t list “Prime Suspect 3” to buy; so much for “commercial” telly!
Posted by Millennium Dome at 7:30 pm

Email ThisBlogThis!Share to TwitterShare to FacebookShare to Pinterest
Labels: Doctor Who, Peter Capaldi, the Twelfth Doctor