It is the tub of chocolates that we left for his research staff. He is on a diet – do not tell him, anyone! 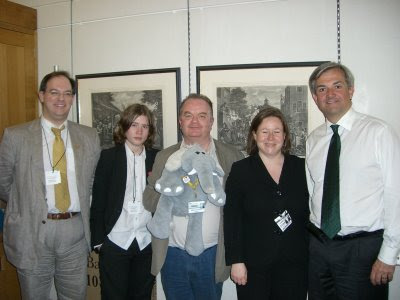 Along with Mr Lord Bonkers and Auntie Helen and Special Agent George, I have been along to interview nearly-but-not-quite Liberal Leader Mr Chris Huhney-Monster in his office in Parliament.

Mr Chris was very generous with his time and we had a terrific and wide ranging interview, covering: the budget and being maybe only half-way into the recession; how the Conservatories are now neither Keynesians not Monetarists nor any other known form of economic theory-ists; electric cars and other toys-for-the-boys; and who is the best Doctor Woo (the Internet demands to know!).

More seriously, Mr Chris was APPALLED by the decision of Mayor of London Bojo the Clown to break his election promise and cancel the opening of three vital Rape Crisis Centres.

"Probably the most worrying aspect in the entire criminal justice system is the failure to prosecute and convict for rape."

JUST 16.9% of complaints lead to a prosecution, and the conviction rate is even worse at a MERE 6%, far lower than in other countries.

"This is an area of appalling violence against half the population," said Mr Chris. "And it is just completely unacceptable."


We talked extensively about policing, about the way that the G20 demonstrations were handled, why there HAS to be an independent judicial inquiry and what lessons need to be learned. How does a senior police officer's stated policy come to be at odds with practice on the ground? And do the Territorial Support Group share "DNA" with the Special Patrol Group disbanded in the 1980s?

We learned that it is NOT illegal to photograph a police officer… except when it is: possibly one at a railway station or an airport or a power station because the law, muddy and badly drafted, is about not assisting terrorist PLANNING.

And we talked more broadly about the need for MORE police but also BETTER police strategy, the need to police with CONSENT – and how travelling in pairs like Chinese diplomats might mean you talk to each other instead of members of the community.


We asked whether he had any regrets about the Geert Wilders business. He said that he had come to his decision honestly that the "Fitna" film DID incite violence and he stuck by that. But with hindsight, he thought that it might have been better to just ignore the man.

Though, in his defence, he added that by the time he was asked, the Home Secretary had already banned Mr Wilders from the country.

Speaking of the "Second Home" Secretary, I also asked about MPs expenses. A little while ago, Mr Clogg published his ideas on reforming the expenses system. Today a rather-less-consultative Mr Frown issued a Prime Monsterial dictat that MPs expenses WOULD be reformed. Spot the difference, I asked.

The difference, said Mr Chris, is that Mr Frown is setting up an attendance allowance with no need for receipts or bills to prove you've actually incurred an expense. It's basically free money. "It won't do at all."


And we also heaped PRAISE on Mr Chris's Freedom Bill and – by wireless digital laser satellite link-up – Award-winning Auntie Alix asked that Mr Chris update the site to incorporate all the good ideas that have been posted as comments. He said that that was definitely the plan, and that we want to develop the CONVERSATION through the website over the next year so we can use the Freedom Bill very much as our CALLING CARD in the General Election.


Anyway, then Lord Bonkers had to hurry off to the Sky Newswagon of EVIL to do an interview, and we hurried home in time to catch him use at least TWO of the things that Mr Chris had said to us. (And Auntie Helen do a walk-past behind the man who was pretending to be in another studio. Hehe!)

All in all, a terrific interview. Thank you, Mr Chris!