We loved this. "Doctor Who" doing all the things right I thought the previous story got wrong: seizing on a "big" idea – here the meaning and consequences of immortality – and exploring it while telling a tale with humour and excitement.

It's the entire Tenth Doctor era in a single episode: from the hubris when the Doctor and companion think they're invincible; to the aching regret for "losing"; to the flashback of Donna reminding the Doctor to save people; to the Doctor's "Time Lord Victorious" moment of defiant anger against "the rules"; to the buyer's regret that followed. 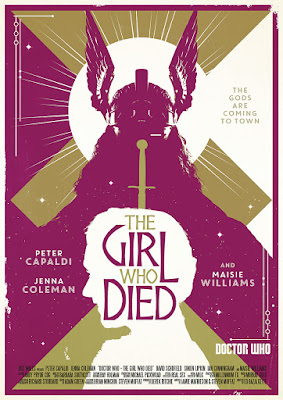 The idea of "immortality" and "gods" was grounded from the very start with a few meditations on Clarke's Law (that's the one about higher science being indistinguishable from magic): first with the Doctor's bragging getting those wretched sonic sunglasses snapped (tragically, it won't last); then contrasting the Doctor's yoyo Odin with the Monty Python-referencing sky hologram; building up to the Doctor's great punchline: "the thing about gods is they never show up!"

(And he's masqueraded as a deity before now, as early as being "Zeus" for "The Myth Makers". They didn't believe him either.)

The uber-macho baddies this week, in their enormously butch armour (but pleasingly "Star Wars" "lived in"), literally live off of testosterone. Obviously subtle they do not do. Though it does make me think someone has been reading Lawrence Miles and Tat Wood's "About Time 3" with its essay on "what does the mind of evil eat" (clue: they guess it's testosterone, because "evil" is a bit too spiritual for them, though nowadays it would be the artron energy/fairy dust that powers everything from the TARDIS to regenerations).

These villains are the Mire, though on first watching – or before seeing it written down anywhere – I heard it as "Maia", as in Tolkien's name for the choirs of angelic or demi-godly being who populate the Undying Lands of Valinor in his Silmarillion /Lord of the Rings "Legendarium" ur-myth cycle. They, in fact, are not real gods either.

But thematically, this goes right back to (ironically, since he was the author of last time's disappointment) Toby Whithouse's "School Reunion", which explored the Doctor's reason's for running away from his past companions, while even earlier "New Earth" had already dubbed the tenth Doctor as "The Lonely God", which in turn foreshadows his shipper-pleasing anguish over losing Rose in "Doomsday".

(I've often felt that Murray Gold's "Song for Ten" from "The Christmas Invasion" fully prefigures the tenth Doctor's life with its refrain of "today has been the best day" – with his first day being his best day and all the days after that just laying more regrets on him.)

Capaldi's twelfth Doctor gets to revisit that with his talk of "losing", itself now foreshadowing Clara's inevitable departure.

And when the Doctor said he would "do what I always do: get in my box and run away", I wondered if this was linking Clara's leaving to another of the themes that seem to be "arcing" though this season – Davros was hinting about the Doctor's reasons for running away from Gallifrey in the first place and Missy underlined it by reminding the Doctor that he was always the one who ran away. Is Steven Moffat suggesting that the Doctor left Gallifrey after a personal loss? Might that be the fate of Susan's parents, perhaps? Or the Master's daughter? Or is that too deep down the fanwank rabbit hole?

Going even further, I did speculate vaguely that we see the villagers, with their electromagnetic anvils, managed to capture three of the Mire helmets – so presumably there are three "medical kits", meaning that the Doctor could have kept a third for himself, or rather for himself to give to Clara. Giving rise to the possibility that the Clara Oswin Oswald in "Asylum of the Daleks" is not another "splinter" but an ontologically paradoxical future version of this Clara. Is Clara's destiny to be this hybrid we seem to be insisting on teeing up as the Season's Big Bad?

Or is that going to be everybody? Clara, Ashildr/Me, [spoilers] Osgood of the Zygons etc… We are all hybrids in a way: an admixture of our mothers and fathers, our friends and our culture; an alchemical combination of beast and angel, dust and stories.

Except, granting Clara immortality too would very much seem to go against the mood in which the Doctor found himself just moments after curing (or cursing) Ashildr.

Ashildr as the "potent storyteller" and the idea of "story" as "lifeforce" (in that it implicitly takes all of hers to defeat the Mire) are threads deeply woven into the Moffat era, reminiscent of Amy "remembering" the Doctor's story back into being in "The Big Bang". I'll talk more about her and Maisie William's performance when I write about the second episode. It's clear that she's being set up as a reflection of the Doctor – an alternative take on the toll of immortality.

And we see the Doctor literally reflecting quite a lot this episode, reflecting on his new face in the eels' water barrels, linking into the flashbacks to "Deep Breath" and to "The Fires of Pompeii".

Incidentally, it's nice that some of the minor call-backs also work with the immortality theme: the use of the third Doctor's "neutron flow" catchphrase (and a fourth Doctor-esque self-parodying deconstruction of it); or the reappearance of the 2000-year (formerly 500-year and 900-year) diary; maybe, if you want to take it that way, even the "space helmet for a cow" Viking outfits… these aren't just fanboy-pleasing nods but reminders of just how long the Doctor has been at this gig.

Equally, contrasting the Doctor's age and knowledge with the insight he gets from listening to a baby – and that it's listening to the baby that inspires him to decide to stay – also works to the theme of immortals needing mortals. After all it was Donna Noble's humanity in "The Runaway Bride" and again in "The Fire of Pompeii", in the very moment that we return to here, that managed to shake the Doctor out of his cosmic detachment and reconnect him to the world. And taking the gag about the Doctor speaking baby from "A Good Man Goes to War" and "Closing Time" and turning it into lyrical poetry was transcendent.

But here is where we get the answer to the question that "Deep Breath" posed – why this face? Or at least we get an answer. It's quite a good answer – quick and tidy with no intrusive timey-wimey arcs. But is it possible that the Doctor takes the wrong lesson from his reflection? After all, Donna's plea was not to save everyone just because he could, but to save someone when he couldn't save everyone; he goes way beyond that here, and seems to realise it.

What really sets "The Girl Who Died" above is the way that it deftly pivots between these deep, even morbid considerations, and outright slapstick comedy – whether it's the Doctor's "it's meant to do that" yoyo-fail, the jump-cut to the burning village, or the yakety-sax footage of the Mire's ignominious flight from Ashildr's puppet. This would be really hard going if it was as "serious" or "grimdark" as some of the fans might prefer. Instead, by leavening it with memorable funnies, Moffat and Mathieson mean it will, I hope, linger longer in the memories.

Next time… Who is that masked, er, person. Oh, you guessed. It's "The Woman Who Lived"
Posted by Millennium Dome at 12:30 pm

"Equally, contrasting the Doctor's age and knowledge with the insight he gets from listening to a baby – and that it's listening to the baby that inspires him to decide to stay – also works to the theme of immortals needing mortals."

Well, yes. Except this moment was spoiled for my by the Doctor's having given such a very convincing explanation of why running away was not just the expedient thing, but the right thing to do. I mean, I realise he has to stay in order for there to be a story; but I nevertheless breathed a sigh of frustration when the Doctor decided to after all do the very thing that he had just eloquently explained would cause the most death and destruction.

But by that point the villagers had made it pretty clear that they were going to stay, regardless of what some strange bloke with a yoyo said was the best plan.

So the Doctor's options reduce to "escape with Clara and leave them to it" versus "stay and do a thing and save (nearly) everyone who is still alive".

As an immortal, of course he could walk away - what value do these "mayflies" have to him?

The baby reminds him that he does value their lives.

No, the Doctor's options as he had explained them to Clara were "walk away and accept that the village will be massacred" and "fight, with the near-certainty that the result will be warrior race returning and conquering the entire planet". He laid it out really clearly.

Just because the Doctor said a thing does not mean that's what the options were. You know perfectly well - and the outcome demonstrated - that he could and did win