Day 5301: Speaking Out Against Extremism


As a member of an ethnic community (namely white people*), it has been brought to my attention that we're in danger, as a community, of "tacitly condoning" extremist language from my fellows because they are "people like me".

These people prey on young British men and women, trying to persuade them to travel to foreign countries thousands of miles away, to perform acts of terrible violence with high explosives.

I mean, of course, people like Mr Michael Fallon, Secretary of the so-called Ministry of Defence (by which we mean Attack) who thinks we should be exploding things in Syria.


There seems to be something about Syria that EXEMPTS politicians from remembering what actually happened. If it's not Mr Milipede claiming he "stood up to President Obama" (when in fact he and Mr Balloon basically cancelled each other out with very similar "let's bomb Syria" motions) then it's Mr Fallon saying we should "think again" about attacking people who we were never thinking of attacking and defending the people who we WERE thinking of attacking!

I think there's a name for how this happens: it's called "lazy journalism" – "Oi! Newspapers! Look at the record and CHALLENGE people when they MAKE this STUFF UP!"

Our history – in the last ten years, or a hundred years, or a THOUSAND years(!) – is one of sticking our fluffy noses into the Middle East and making a mess. So we've got RESPONSIBILITIES and AMENDS to make.

And the Not-Islamic Not-a-State terrorists (should we call them NINAS to keep the Prime Monster happy?) are, as far as I am able to judge from their actions, among the most horribly evil people on the face of the planet, and if they come anywhere near us then we would be quite right to fight them off with the full might and power that the West could deploy.

But they AREN'T anywhere near us. And we certainly do not seem willing to deploy enough might and power to defend the people in the region that we say are our friends. And deploying only the tiny fraction of the full might and power that we can be bothered to send – while still fully capable of flattening large areas of any Middle-Eastern country – doesn't half badword off the survivors!

If you want to intervene, then (a) get a UN mandate and (b) send enough troops actually to do the job. Lobbing bombs in the general direction of people you don't like just so you can feel better… that's what TERRORISTS do!

We have in the West an "ultimate weapon" that for all the undoubted impressiveness of all that might and power is INFINITELY more successful than ANY amount of ordinance: it is called PEACE. Sometimes it is called prosperity.

It is why Ukraine is willing to stand up to Vlad the Bad. It is why hundreds of thousands are willing to throw themselves in leaky boats to cross the Mediterranean.

So I KNOW it's COMPLICATED, but can we at least START from a position of HUMBLY accepting that we keep messing up and that SWAGGERING around THREATING to EXPLODE people is, to say the least, not helping.

Today is "7/7". We should remember. And we should do BETTER. 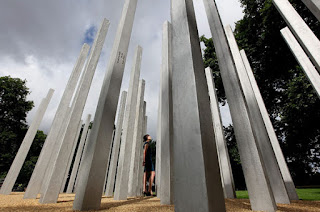