It is AMAZING the amount of things that scientists continue to discover! 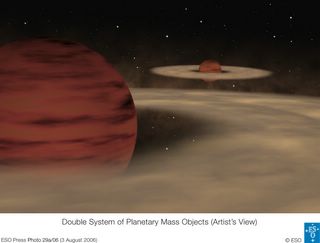 Here, astronomers have spotted two great big planets floating in space on their lonesome without a STAR to orbit.

And by SIZE I mean MASS, or HEAVINESS.

You might think my Daddy Richard is a bit on the HEFTY side, but Jupiter weighs in at TWO SEPTILLION TONNES – that's a 2 followed by 24 zeros, so I am not going to type them all with my nose!

Whatever way you count it: they're HUGE!

Planets like this are sometimes called BROWN DWARFS because they are thought less to be planets that got really, really big and more to be potential stars that did not get big ENOUGH! They can be anything up to seventy-five times the size of Jupiter – heavier than that and they would EXPLODE because they would be big enough to be a proper star!

So these two, big as they are, are comparative TIDDLERS!

Scientists used to think that planets were made from the left over bits when stars are born. A cloud of gas and dust, called a NEBULA is pulled into a spinning disc by its own GRAVITY: most of the matter gets pulled into the middle and becomes the star, but the rest forms into planets.

However, this theory of planet making is based only on our OWN Solar System.

In the last few years, astronomers have discovered many planets orbiting far away stars and have now started to discover planets out in space on their own as well. This may mean that they have to RETHINK what they think they know, because none of these systems of planets look anything like OURS!

Mind you, we then get speculation from Dr Martin Beer and his colleagues from the University of Leicester's theoretical astrophysics group that:

"If the Solar System is unique, then the search for Earth-like planets around other stars may be in vain"

Hmmm, and if I'M unique, there MAY be only one of ME too!

It may just be that the planets that we have spotted so far tend to be LARGE because we have a technique for SPOTTING large planets!

Meanwhile, these discoveries have caused some problems with the whole DEFINITION of the word "planet" because generally speaking we think of a "planet" as "a big round thing that goes round the sun (or some other star)". These babies may be big and round but they ain't going round any star!

This has led to them being dubbed PLANEMOs meaning PLANEtary Mass Objects.

As it happens, astronomers are having trouble with planets at the other end of the scale AS WELL! Recent discoveries of chunks of rock and ice floating around the outer limits of the Solar System have led to a spate of stories about the finding of the near mythical TENTH PLANET.

Quaoar, Sednaand most recently Xena have all had a go!

It seems like either we should have a whole load of new planets, or poor old Pluto should get kicked out!

Fortunately, the INTERNATIONAL ASTRONOMICAL UNION are meeting in Prague to sort it all out.

Set off in the direction of the constellation Ophiuchos (as seen here).

But keep going about for about 400 to 450 light years. That's a BIT further away than the visible stars of the constellation.

(Remember to take in the famous BARNARD'S STAR, the next closest star to our own after the Alpha Centauri triplets (α Centauri A, α Centauri B and Proxima Centauri), as you are passing.)

You should find them around 300 light years further in towards the galactic centre and about 300 light years clockwise from where we are, but still within the same spiral arm (the Orion Arm) as the Sun.

Here is a map to help you!
Posted by Millennium Dome at 7:25 pm