I was lucky enough to attend the Liberal Democrat leadership hustings in London, and to meet both candidates.

Going in I was leaning more for Farron, and the Tim Lord did indeed play a blinder: full of that old-time Liberal religion. And his last word – "it's my job to get Norman back into Government" – was the best line of the night. But Norman was consistently impressive throughout as the one who put thought into his answers. He made it very much harder to choose. And that's got to be some kind of victory for the Norman Conquest. 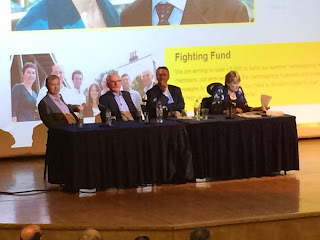 Illustrative was the question: "What would you vote against the Party Line on?" (one of Alex's favourites). They both didn't answer the question but in different ways.

Tim's answer was to point to his rebellious record in the last Parliament, voting against the whip on Tuition Fees and Secret Courts. Those are his radical credentials, right there, do what's right not what's on the ticket. That's not really voting against the Party line, though. Norman, answering that question second, chose that opportunity to defend his own record as being the "good boy" and voting for those things on the grounds that practical Liberalism means doing more good by staying in and winning the fights you can win, rather than letting "best" be the enemy of "good".

So in some ways – from a certain point of view – Tim was being the more careful candidate here, embracing the Party, touching us in our warm happy place, while Norman was willing to be a bit more dangerous.

If we were still a credible force in the House of Commons, whether in Coalition or at least in contention to be in Coalition, there would be a strong case for a candidate who has shown just the sort of "winning the best deal" by "tough decisions" talent that Norman has. But we've been massacred. To his credit, Norman clearly recognises this, and that continuity – being the "establishment" candidate – are a weakness in this context, and he's been highly active in generating radical policy ideas to demonstrate that there is so much more to him than that.

When questioned on policies, both candidates were – unsurprisingly – saying the same things: we need to make tackling the housing crisis our priority; we should be first in line to defend the Human Rights Act; we should celebrate immigration not condemn immigrants; renewables not fracking. But although Tim was saying we should be the Party saying the difficult, "spiky" things, Norman was the one coming out with the "out there" ideas, in particular taking the fight to the Home Office (our natural enemies!), on drugs and on cutting the numbers in our (vastly overcrowded) prisons.

If I might paraphrase "Yes, Prime Minister" episode "The Ministerial Broadcast", it's pretty clear that Tim would be the one sat in the oak-panelled room with the leather-bound books on the shelves and the calming tones of Brahms playing to reassure you; while Norman would be all modernist furniture and Stravinsky to distract from the Continuity Clegg label.


With only eight MPs… and one of those the ex-leader, the Reverend Nick, who the public no doubt expect to step into quiet semi-retirement (or to put it another way, they would say they've seen the back of him)… and another, Alistair, the Laird Carmichael, shall we say, hors de combat… with only six MPs… I'll come in again…

At least one candidate (it was Tim) has made it clear that we will have to pick our campaigns.

I would suggest we have to cover the following:

1. Personal freedoms and Civil liberties
2. Health, Social Care and the dreaded "Wellbeing" (so including housing)
3. Opportunity and Education
4. The Economy

In the short term, it almost doesn't matter who wins.

Norman has already made himself a champion of personal rights with support for an Assisted Dying Bill, and his excellent policy announcements, in particular on the failed war on drugs and on our prisons. And (for all those "Yes, Prime Minister" reasons) the fact that he looks the more establishment character makes him just the man to be taken seriously when attacking the Home Office from the ANTI-authoritarian flank (something Labour hasn't done for twenty years).

Tim clearly knows his Beverage (and I don't mean TEA), and he's got the background (voting against Tuition fees gives him the opening to be listened to on the subject, possibly the only Lib Dem who can do that), and the talent of a natural preacher to condemn the Tories as "immoral" (which he did several times on the night): clearly he's the man to lead on housing and education.

(Obviously we should be defending our NHS too, but there's no way to make that an issue identified with us and not Hard Labour – however unjustified, they've just spent too much political capital in buying that as "their" turf. What we could and should do, in fact, is address ourselves to the "wall of bureaucracy" that often means the NHS works for itself rather than patients – of which Mid Staffs was only the most extreme example.)

We cannot NOT talk about the economy (stupid), and I'd ask Tom Brake to be our Shadow Chancellor.

Additionally, I'd ask Nick to be spokesperson for foreign policy. It means we can use his considerable talents, but at the same time allow him to step aside from the field of everyday politics, and be a (very young) elder statesman figure.

But the leadership is for more than just the short term. It is about who – as a Party – will be speaking for us for the next five years. Because the media will no doubt shut us out now, and at best we will get our leader to appear on TV's Questionable Time or the occasional talking head comment on the news.

(I did wonder briefly, Tim might be "interesting" enough to get the occasional appearance even if he were not leader, which – in Bizarro world – might be a reason to pick Norman for a "two bites of the cherry" approach. But it won't fly. If we want our best – surviving – communicator to be able to communicate, then we'd better decide which of them it is and make him leader.)

So this is the question: are we content as a Party to drift back into quasi-think tank status? Or do we want to say loud and strong that May 7th will not stand.

This Party, this liberal phoenix needs fire. Tim certainly has fire. And it may be that that's what wins it. But if it does I very much hope that his first act will be to put Norman in charge of choosing our campaigns, picking the fights we're going to pick.

courtesy of Count Packula: the opening speeches of both candidates.

First to speak was Norman…

Posted by Millennium Dome at 2:00 pm

A good evening, but I thought Sal Brinton allowed it to go on too long. It started at 7 and by 8.30 quite a lot of people had left.

Who said the Home Office was "our natural enemies?" Did Norman actually say this?

Who said " the Home Office was "our natural enemies?" "

AS with most things I say, it is supposed to be amusing/satirical rather than extremely literal, but I would defend the idea that is is the job of the Home Office is to increase security and they mostly do this by reducing liberty, while the job of the Liberal Democrats is to defend liberty which naturally puts us each into opposition.

(That's my most generous description of the two positions. I'd go further and suggest that very often the Home Office does things that reduce liberty and do NOT increase security:- counter-productive measures like stop-and-search or "go home poster vans" which generate resentment and breed threats to security; and ludicrous security theatre - like ID cards or the snoopers charter - which is in the business of *looking* like it's doing something but actually wastes resources, money, time, manpower, on activity that achieves nothing.)

That is fine. I knew it wasn't a direct quote, but wasn't sure if it was part of the general conversation.

I don't agree, but it is a fair position.

There is not much point in "generating radical policies" if you are not prepared to stand by them. The problem with the way we behaved in coalition was that we did not stand by our policies, and ended up with the disgrace of a million of our fellow citizens having to use food banks. Apart from our shame, what makes us think that any of those million will ever vote Liberal in future?

A dispassionate view of the evidence would show that we DID stand by our policies.

We delivered more than 75% of our 2010 manifesto – a pupil premium, an increase in personal allowance, a green investment bank. We reformed pensions, made the Chancellor increase benefits (in 2010, 2011 and 2012) and the minimum wage, and raised taxes on the better off by increasing Capital Gains Tax, closing tax loopholes and freezing the 40% tax threshold. We created equal marriage, and ended detention of children for asylum seekers. We blocked the Snoopers Charter and ended I D cards. In a time of deep recession we – uniquely in the Western economies and for the first time in 30 years – saw the globally-recognised measure of inequality improve in the UK leaving the country less unequal than it had been under Gordon Brown.

Which of our policies did we not stand by that led to "a million of our fellow citizens having to use food banks"? As opposed to that massive global economic meltdown that happened on Labour's watch?
Why are you buying the narrative of that same Labour Party?
E.g. that "one million" figure: see Full Fact https://fullfact.org/factcheck/economy/food_bank_number-40853

How do we win back the votes of the HALF a million people using food banks? By telling them the TRUTH: the economy was destroyed under the Labour Party; the nation's services were destroyed under the Tories; when the Liberal Democrats were in government things got better.