Day 3185: You Know The Drill… It Should Have Been MEEEEEEEEE! 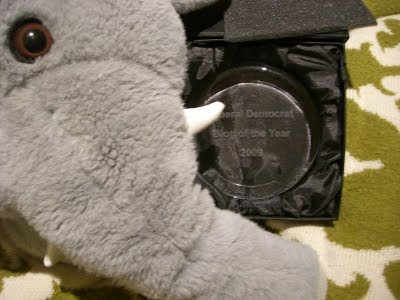 No, the cloaked figure of Wicked Uncle Costigan has just dropped by to collect our congratulations and his embossed glass ashtray before slipping away into the night, leaving only a set of treasury projections and a guide to British Bee Keeping to show he was ever even here.

Yes, we have been at the Liberal Democrat Blogger of the Year awards, sponsored by the Local Government Association for not-enough-money-to-pay-the-bar-tab, presented by Mr Former Lord Deputy Mayor Stephen, in the presence of Dale Winton, for "Come As Someone You're Not, Night!"

Mr Will was NOT Mr Brian Robson, winner of best Lib-Dem-with-a-Job Blog

Mr Stephen of the Glenn was (mostly) NOT Mr Slugger O'Toole, winner of best not-a-Lib-Dem Blog

And Daddy Alex was very definitely NOT Blogger of the Year, Wicked Uncle Costigan …probably(!)

It *should* have been you - or failing that, your Daddy Alex. No offence to the rest of the shortlist, who are all great, but I have *no idea* how these awards have lasted so long without you winning one...

A comment from Mr Neil Craig has been deleted as SPAM.

There's nothing for it but to bring sticky buns along next year to throw at the judges.