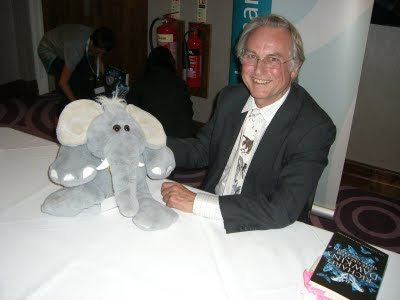 Yesterday he was introducing a VERY important amendment to our Civil Liberties paper, saying we very urgently need to reform the LIBEL laws so that Scientists can DISAGREE and more importantly WRITE about disagreeing based on EVIDENCE and not fear the SLAPP of a gagging order.

Today he was reading from his new book, an exploration of all the wonderful evidence for the Fact of Evolution. I particularly enjoyed the [warning: facetious] March of the Penguins from Mount Ararat to the South Pole.

In other conference news, the hall was packed out for the speech by Mr Dr Vince "the power" Cable, raising Wealth Taxes on million-pound mansions to help raise thresholds to put up to £700 back into the pockets of low to middle earners.

But I was there from the start of business – did you KNOW that Conference opens with a crash zoom onto Bournemouth from SPACE… just like the start of Doctor Who? – so not only did I hear the excellent debates on Parliamentary Expenses and an Inquiry into British Complicity in Torture, but ALSO caught the less attended but also rather good speech by Mr Tim Far'n'away (performed Balloon-style without reading from his notes) AND Mr Brian's very excellent panel on crime and prison policy, with some really interesting guests.

Terrifying facts learned this week so far (from the Civil Liberties debate): the DNA database already holds samples for a quarter of all black men… and because of the way your DNA holds SIMILARITIES with that of your family, this means that the ENTIRE black population of Great Britain can now be profiled though the database. Just THINK about that for a minute.

I have never been in the hall before 9am to see the crash zoom from space. Perhaps I should get up earlier.