Day 2990: How I bottled out of asking Mr Vince if he was going to slash higher education and the army


As I said, I was LATE for my interview with President Ros because I was in the main hall listening to the speech of our Treasury Spokesperson, Mr Vince "the Power" Cable, and could not tear myself away.

I came away with the distinct impression that our SAINTED Shadow Chancellor was carefully and quietly laying the groundwork for announcing strategic cuts in government spending. Or more bluntly, warming up the sacrificial knife and letting some of the sacred cows know they have an appointment…

Specifically mentioned were higher education and the armed forces.

The suggestion that we cut the size of the army is quite BOLD. "Courageous", Sir Humphrey would say. It is certainly a stick that the Conservatories, with their jingoistic hats on, would use to beat us with.

It is certainly the case that we have been asking ridiculously too much of our armed forces. Hard Labour got us into one completely unnecessary war that has made the other possibly necessary war much, much harder to fight.

The difficult question here is one of RESPONSIBILITY. Mr Clogg has spoken of a world where intervention is possible. But who's going to do the intervening – for all that it should be under a blue flag with a UN mandate, SOMEONE has to provide the boots on the ground. And if Great Britain is going to do less, that means either we're asking someone else to do MORE (and see how difficult it is to do that even among friends in Europe), or LESS is going to be done. We – the civilised world – are already walking on by while Darfur and Zimbabwe go to hell in a handcart. How many other places will we let slide into anarchy or, worse, the grip of someone like the Taliban who we end up having to fight in the end anyway?

I'm not against us bringing home our troops, putting right the shocking state of their homes here in the UK and using our army to defend us rather than supporting the failed policies of a President who is now history.

But it's never as easy as JUST saying: "right we'll come home now".

Mind you, for a Liberal Party, particularly a big soft fluffy liberal party like ours, saying "less war" is going to be much, much less of a problem than saying "less education".

Even raising the QUESTION of whether sending 50% of all young people to university is a good idea could be seen as retrograde, anti-opportunity, even… CONSERVATIVE.

But let's just try and look at this PRAGMATICALLY for a moment. We USED to have a system where we offered a free university education of exceptional standard to a smaller number of people, ideally those who would benefit from it the most, though in practice this was mixed to a greater or lesser extent with those who could afford to buy their way in too. A university education BECAUSE it was rare offered you a step up into the best opportunities.

By vastly expanding the pool of graduates you also reduce the SCARCITY value of BEING a graduate – you transform the degree from a course of study for those who it will benefit into a pass/fail test that divides the nation into two: those who'll get the jobs and the rest. Because if a degree is no longer the passport to top earnings, it has become – even worse – a necessary hurdle to ANY earnings. Congratulations, you've just re-invented the 11+ as the 18+.

And then you've got to PAY for it all, for all those extra places studying, which needs more lecturers and accommodation and facilities, and you're talking two three times as much money, so where's it going to come from? Well, you end up mortgaging your children's future in order to have THEM pay for what you got for free. And for how much? Three thousand pounds? Five thousand? Ten thousand? So now only those who can AFFORD it will take the chance and that means the ones who's parents are already in the well off half and social mobility is killed stone dead. Well done, Hard Labour, good luck with pulling that ladder after you.

But… but, but, but. Who am I to say that it ISN'T an opportunity, and people ARE still clamouring to get in to university, even if it means taking up the offer of eternal debt in exchange for a graduate salary.

I THINK we would be better off with a RANGE of opportunities, founded on a good education to 18 but with different paths after. But that's merely what I think.


Anyway, we did an INTERVIEW with St Vince, and THAT is what I SHOULD have asked Mr Vince about when I had the chance. But I bottled it. Come on, this is Saint Vince and we are very much on the same side – I don’t want to be putting my big fluffy foot in it asking something awkward about fundamental policy changes.

So I asked him about the Euros and about the Post Office instead. These were clearly less stupid questions than last time we interviewed him and I asked if he wanted to carry on being Deputy Leader (answer: yes) even if they weren't the real questions I should have asked.

The point about the Euro is that the currency MAY get blown to pieces if PROTECTIONIST pressures get too great; however it MAY end up being stronger if it becomes a reserve currency – which isn't one you keep on the bench just in case but is actually one that people buy up to shore up their OWN reserves. I had hoped that St Vince would use his FAMOUS POWERS of PROGNOSTICATION but he was not to be drawn so easily.

Admitting that either of those things COULD happen, he did say that the single currency would come under a lot of pressure as the recession affected countries, especially Portugal, Italy, Greece and Spain which are known to have weaker economies, compared to Germany. (Mind you, we're ALL weaker economies compared to Deutschland!) This was the first SERIOUS test of the new currency, he pointed out, and the first time in a decade that the Eurozone has faced a recession. Fortunately, he felt that it was UNLIKELY to break the currency.

On the other fluffy foot, he also thought that a very serious currency crisis like this revealed to people just how VULNERABLE we have let ourselves become by staying outside.

On a more positive note, after the crisis has passed he thinks that that will be a good time to reassess our entry into monetary union. Obviously, he restated all the usual caveats about "at a rate that is sustainable" and "not without a referendum". But he clearly felt that a good part of the case FOR the Euro would have been made if it weathers the banking apocalypse (and another good part will be made if it weathers it BETTER than the New Pound, the noble traditional currency of Great Britain since, er, 1971).

Post Offices are topical, thanks to Lord Mandelbrot, and also of great interest to any local community where their Post Office is threatened with closure. And also Daddy had written some really good questions about them earlier.


So I asked whether the bottom of a huge stock market crash wasn't a STUPID time to be considering a privatisation, and shouldn't we be trying to get some more competition into the business rather than just an under the counter deal with one private firm?

Mr Vince agreed that now was, as he put it, perhaps not the best time to get best value for the shares.

Though he slightly evaded the rest of the question, not actually dodged more of a weave past: he said that as liberals we supported the idea of liberalisation in the postal industry, but that it shouldn't be reduced to "cherry picking" the best bits and leaving the universal delivery to the state. But he moved quickly on to critiquing Lord Mandelbrot's proposals, saying that we have laid out a number of key tests for the legislation when it appears – will private companies have to contribute to the universal service obligation; will postal workers participate in a John Lewis-like workers partnership; will the Royal Mail be kept as a public body; will the private investment be used to support the Post Office network. He reckoned that actually Lord M will fail one or more or all of these tests and that we will be opposing the legislation. Still, it is good to keep an open mind first.

He also suggested that competition is difficult because the sorting and distribution is a natural monopoly, though for myself I am not sure that that is true, or at least not any more true than it is for the supply of telephone services because the wires form a natural monopoly. Unless I'm wrong, wasn't British Telecom one of the more SUCCESSFUL privatisations introducing competition into the whole telecom industry?

Anyway, those were my questions.

Far more interesting was the conversation we got into about BLOGGING, and why Mr Vince doesn't do it – mainly time – which also linked up with Auntie Alix's questions about targeting, and the advice he had for Jo Crispy-Strips about how to get elected. (Which was: keep on slogging, you'll soon learn that a few good speeches aren't remotely enough and you'll need a lot of hard work and a lot of good canvassing information and most importantly a team). AND then Lady Mark went on to talk about how Mr Vince had been doing a lot of visits to local parties and "not just the glamorous ones". (The trick is to ASK, folks!)


For better accounts than mine, look to our other star panellists:

The Honourable Lady Mark (parts one and two)


Star Prize, though, goes to Auntie Helen for the World’s longest 12 second video. 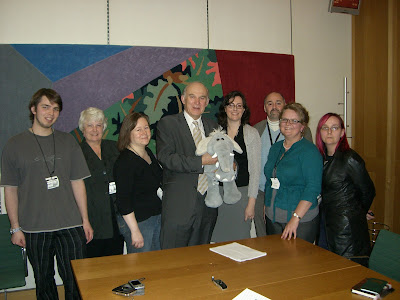