Day 2988: If your local party is a bit rubbish… who you gonna call? – Millennium Elephant meets President Ros Scott


All right, so I arrived LATE for this interview. It's a LONG way up that spiral ramp to the auditorium in the Harrogate Centre and my fluffy legs are only LITTLE, so it takes AGES to get all the way back!

Anyway, the Fragrant Ms Mary Reidmyday and Mr Costigan Quist have already given you the low down on what happened when they along with lovely Jenny and Auntie Helen and (yes, yes EVENTUALLY) my fluffy self got together for an interview with Ms Baroness Ros Scott, who looked resplendent in the newly minted Presidential diamante conference-badge lanyard. (Apparently Mr Hugs has yet to hand over the Presidential Tiara.) 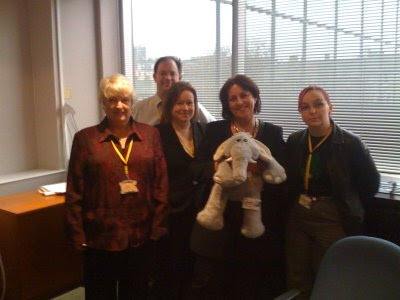 The Committee for the Return of the Presidential Tiara

So, I am talking instead about one thing that came up, but that seems to have been a growing notion that spread over the course of the conference from our meeting with Governor Dean and into our conversation with St Vince of Cable too – in a word: targeting.

In slightly more words: because we have limited resources we have to chose most carefully where to put them, therefore we lend our support to places where we have the best chance of winning, whether at local or parliamentary or even European level. It's a strategy known as Rennardism and Lord Rennard, the Party's Chief Executioner Executive has been renamed after it. Er, I think. It has had, as Mr Vince pointed out, enormous success, resulting in the best Liberal representation in Parliament in a Century.

On the other fluffy foot, Governor Dean's whole strategy, the Fifty State Strategy, is about reaching out to BEYOND the places where you can win. The reasons are TWOFOLD.

Firstly, your support does NOT end at the boundaries of your winnable constituencies. Targeting, though, abandons those voters, leaves them out in the cold almost. A Fifty-State Strategy lets them feel a part of the victory, and more than that it lets them know that they are not alone out there. By empowering small networks in places where you are not strong, you provide not just comfort to your own supporters but visibility among supporters of other parties and of none. The more people who at least KNOW someone who will say "I'm a Liberal Democrat! I'll have a Babycham!" the more CREDIBILITY you have when you claim to be a NATIONAL PARTY.

Secondly, for new members, at the moment, it's a LOTTERY. If you are lucky, you find a local party that is a strong and coherent group, where you can make friends, have fun, a good old chin-wag and learn about liberal democracy and feel supported. If, however, your scratch-card comes up blank, then you find little more than a stack of Focuses and a begging letter signed by Lord R.

Mr Vince said himself that the BEST thing about the Liberal Democrats is the REALLY EXCEPTIONAL PEOPLE.

BUT… you need to FIND those people. Getting elected is DIFFICULT and HARD WORK. Governor Dean told us that the PERSONAL CONNECTION was the most important factor in winning an election. But you need to be making that connection to several thousand homes just to be a councillor. That needs a TEAM effort.

So the VITAL question that seemed to be coming through from the conference was this: Are we, as Liberal Democrats, losing vital support because the people who WANT to find us, can't?

And what do we do about it?

President Ros certainly seemed AWARE of the question, and had SOME answers – she talked about developing a policy network that could involve people more directly in formulation of policy; while at the same time saying that Cowley St couldn't (and SHOULDN'T do it all) and that regional parties had to take some responsibilities.

We want to use our resources SMARTER. Obviously we want MORE resources too – Mr Costigan asked Ms Ros about that, and she said that we need to ask. We need to act more like a CAUSE or CAMPAIGN rather than a political party. We need to ask for money FOR something, not just "the Party". And we need to be less EMBARRASSED about asking. But basically we need to ask.

But President Ros also thought that we should be using our resources BETTER – we have a smaller membership than the other two parties, but often a better educated and more motivated one: the skills are out there if we can find them. (Another "find the people".) And there is a good deal of unnecessary duplication of effort that we should try, where possible, to trim.

But that's not the answer to the question, is it. It's the BEGINNING of an answer, it's at least a recognition that there IS a question to answer, but it's not getting us all the way there.

How do we, without compromising the investment in target seats, reach out to our own "Fifty State Solution"?

If you are READING this then you and I are connected via the Wibbly Wobbly Web. You are an Internet Person, and probably a bit of a Liberal One too. And therefore QUITE SMART.

But the Internet alone can't do it. At the Lib Dem Voice fringe event, Ms Karen from the Obamamaniacs (or Barry O for America Campaign as it was formally called) talked about the success of the Internet in the Presidential Election, but also said how they never wanted it to be too good – they didn't want the voter to think "well, I've really enjoyed the website and now I've 'done' Barry O for President". They wanted the voter to get up from behind the screen and go out and DO something. Vote, mainly, but delivering would be nice too.

So think. How do we capitalise on the connection that we already have? How do we build on it to make a Liberal Network that CAN reach those liberals out there, and how do we get them MOVING?

How do we find them, the ones Mr Vince called the REALLY EXCEPTIONAL PEOPLE.