Ho ho! That fooled you, didn't it: you were expecting more Robbin' Hoodie! Well, instead, my Daddies have driven us off to PORTSMOUTH in order to see a PLAY. With DALEKS in it!

As you probably remember, the BBC made lots of Doctor Who in the nineteen-sixties and then carelessly INCINERATED lots of it. Boo! Fortunately, some bits still survived outside of their hands and over the years many have been recovered.

One CLASSIC story that is still in pieces is called "The Evil of the Daleks". Guess what it is about! Well, clearly the BBC didn't think to look for it to be left lying about on the stage of the new theatre royal in Portsmouth! And that is where we discovered it…

This is the third outing for Nick Scovell as the second Doctor, after previously appearing in adaptations of "The Web of Fear" and "Fury from the Deep". He has his own take on the character, distinct from Patrick Troughton’s, and it is a good one, all the better for not attempting a caricature. It’s a more abstracted Doctor, as though his alien thoughts are always far away from, and above, what we mere mortals might dwell upon. Where Troughton gives the impression of playing the fool to cover up for being so far ahead of the rest of us, Nick seems to be on a different plane altogether. In some ways it reminds me of the seventh Doctor more, though without the maniacal energy or quite the darkness.

And in some ways this was a more god-fearing Doctor: certainly one that seems more willing to engage with the moral and theological aspects of this particular morality play of an adventure. Though that may rather be the authorial voice rather than the Doctor’s, and a different viewpoint to avowed atheist Russell T Davis it is too. Religiosity runs through the play and the characters: the character of Edward Waterfield has been "reverended" to make him a vicar who has lost his faith, looking to regain it by touching the design of god through science only to find the devil instead; Ruth Maxtible, a very underused Bridget Forsythe in the televised story, here becomes quietly powerful through her own understated strength of faith.

In the question and answer before the play, Nick – who also adapted the David Whitaker screen play for the stage – admitted that where he had previously stuck quite closely to the television versions, this time he had adapted much more freely to try to capture more of the pace and emotional tone of the new series. This isn’t always successful – making Waterfield a reverend is a little heavy handed and does not add a lot to the character beyond an excess of hand-wringing – but quite a lot of it works. And, in fact, the play quite naturally fell into two forty-five minute episodes with cliffhanger (and intermission for ice cream).

If you are familiar with the original, you will know that the television "Evil…" is a sprawling epic tale that travels in time and space from London, Gatwick, 1966, back to Theodore Maxtible's county house in 1866 and then to Skaro, year unknown though believed to be sometime after the year 4000. For obvious reasons, this version chooses to compress events to just the Victorian house setting, allowing for a (seemingly) minimalist stage set: a walled up fireplace and two gas wall lamps, and the action taking place in front.

Surprisingly, this doesn't hurt the story – in fact, the first half (or episode) is rather improved as the pace is driven so much faster. Rather than slowly unfolding a mystery as the Doctor tries to trace his TARDIS back via clues that lead to fake antiquarian Waterfield and thence to Maxtible, we cut quickly to the chase. Waterfield and Maxtible have in the course of their experimentation opened a way to the Daleks to invade the house.

"The Evil of the Daleks" contains a number of particularly fine scenes, as the Doctor confronts the rouge Victorian scientists over the morality of their behaviour, or indeed confronts the Daleks themselves. Doing away with the need to pad out three or four episodes of television allows Nick to gather these together and present a much more powerful version of the central moral themes: unlike the Daleks, we are responsible for the consequences of our actions. Where they are conditioned only to obey and destroy, we have free will and that allows us to be either better or worse than they are: the two conditions being represented by Waterfield (who tries to make amends for his misdeeds and sacrifices himself) and Maxtible (who is consumed by greed and naturally ends up becoming a Dalek himself).

The second half after the intermission was not quite so successful, despite a genuinely amazing realization of the Emperor of the Daleks, a huge prop looking almost exactly like the one on television (1960's version, not 2005 CGI version), revealed to have been lurking behind that walled up fireplace. 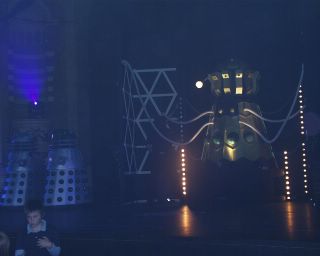 Do not fight in here!

The story does depend more on action for its conclusion and less on the powerful dialogue that so coloured the first half. And, in all fairness, even the television series had difficulty depicting a full on Dalek civil war – resorting, infamously, to wind up Dalek toys for crucial filmed sequences. (And sadly not the last time the series tried that dodge, either!)

The script takes a few liberties with the story at this point, firmly establishing that this Emperor and his five Daleks are the last Daleks in existence from a point very, very far in the future. This covers them against questions of why they only have five Daleks on stage, of course, but does rather kick against the continuity of the new series: the Emperor has millions of Daleks up until the rather sudden end of the Time War, after which he has none and has to build himself some new ones out of dead people. I don’t really see where this Emperor is supposed to fit into that timeline. Also, with only five Daleks left in creation, would you really let the Doctor experiment on two of them with the human factor?

In fact, in both previous productions, they have made effective use of short film clips played in to produce action sequences larger than the stage could handle – just like the television would do, in fact. So, it was a shame that they did not employ that technique here.

On the other hand, having the power of friendship key to saving the Doctor from the Dalek factor treatment – rather than just his alien nature as in the original – is a great improvement, connecting as it does with the earlier themes of why the human factor beats the Dalek factor, and also clearing up a plot hole of the Daleks (who know that the Doctor is an alien, and indeed base their entire plot on his superior alien knowledge) looking rather dumb by forgetting that he isn’t human.

There were some particularly fine performances. The Doctor and Jamie (John-Paul McCrohon) are excellent as they have been in each of these productions. Add to that both Maxtibles: daughter Ruth (Sally Evans), as previously mentioned, and father Theodore (James George) played as Marvel comic villain the Kingpin – who he physically resembled too: bald headed, smoking jacket and cravat pin, all very different from Marius Goring's memorable beard and wild hair.

But the most important presence on stage was, obviously, the Daleks themselves. It is astounding just how creepy they actually are in the flesh. Or in the poly-carbide, I suppose. The audience reacted to their entrance with spontaneous applause, and after that they remained on the stage throughout, highlighted at the back of the stage with a couple of purple spotlights – a clever way of underlining their metaphorical presence throughout the story.

We heard all the stories from the chief Dalek operator (or self-styled Dalek Supreme) about cursed Dalek shells that try to impale the occupant, pitch themselves off the stage front or – most hilariously – miss their exit and have to tap-tap-tap their way along the back cloth using their sucker arms to find the way off stage. But never mind that, on the night they behaved impeccably, gliding with menace and deliberation, turning far faster than you would have thought possible and of course exterminating anyone they felt like.

The Dalek props were the property of fan group Devious who have apparently been building and filming them for their own fun for some years. For this performance they were "subtly" modified – by which I suspect they mean that they had fitted a more traditional Dalek body with the larger ear-light pieces of the Daleks from 2005/06. The colour scheme of silver with green bumps was, er, novel, but usually looked black in the stage lighting anyway.

The biggest change from the two previous plays was in fact the audience. 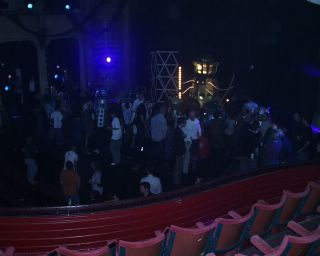 Not only was it huge - the play was a sell out run in all of the performances - but the mix, at least when we were there on the closing night, included a great many families with young children, clearly fans of the new series and clearly hugely enthused by this play as well: their delighted, not to mention insightful, discussion of the action filled the auditorium after the show was over, as they stormed the stage in order to be photographed with their Dalek heroes.

Not bad for a story shown on the telly forty years ago.

Posted by Millennium Dome at 1:34 pm