Day 5417: DOCTOR WHO: Invasion of the Blobby Snatchers


Last year, we loved Peter Harness's "Kill the Moon". This was, er, a controversial opinion. (No, that's not an invitation to tell me again why I am wrong.) Perhaps, having everyone read an allegory that wasn't there into his previous work, you might think he'd be more cautious. Not a bit. This year, we're putting the subtext into the text so blatantly that nobody's going to get the wrong message. (I bet they do get the wrong message.)

But it's always a relief to be able to give an honest review to people you know. And this was terrific.

In fact, at the risk of offending Millennium, this was as globetrotting as SpECTRE – from London's London (Cardiff) to American New Mexico to vaguely Middle-Eastern Walesistan (Snowdon) – but with actual plot twists and character development.

With is extra-pressing to get my guesses for "Next Time" in before the sequel airs tonight, I'll be cutting this sort and may repost with more thoughts later… 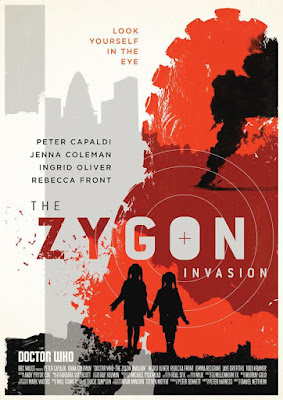 So, did I say Agincourt was topical for "The Woman Who Lived"? Let's talk terrorism while the UK celebrates Guy Fawkes. And a Happy Homeland Security Day to all of you at home.

And, did I say they were doing "big ideas" this year?

From the earliest "scientific romances" of Mr H G Wells, science fiction has been about things, in fact about the present much more than the future. ("The Time Machine" is about the class struggle; "War of the Worlds" is "How would Britain like it if someone did Imperialism to them?")

And it couldn't be more topical. The Zygons are refugees. Their homeworld (I call it "Zygospore", 'cos that's the way I like to roll) was known to have been blown up as early as 1975's "Terror of the Zygons", but we were told in "The Day of the Doctor" that it was in the early days of the Time War – which of course began, if you think about it, two stories earlier in "Genesis of the Daleks".

So, in a time when some parts of Europe are greeting people fleeing conflict and destruction with "Refugees Welcome" banners while other parts (Britain, shamefully) are grudgingly suggesting they will take the bare minimum people they can, we see an Earth that agreed to take twenty million refugee Zygons.

But, as in the best of sci-fi, the baddies here have something of a point: the Zygons haven't been welcomed to Earth; they're only allowed to live here so long as they integrate. Their own culture has been suppressed and they themselves are forced to adopt human form if they want to live here. They are tolerated so long as they are "passing", as the old phrase would go – when the only "good" homosexuals were the ones you couldn't tell, not like those dreadful camp gays and drag queens(!).

And the response of the "heroes" – all guns and drone strikes – is not coming down on the side of "heroic". I loved the Zygons being their own human shields (even if all the UNIT soldiers falling for the Zygon gambit is excessively dumb, even for UNIT). Even the Doctor is saying "try not to kill too many". Unless that's a clue for next week (see speculation).

Does any of that excuse the "radicalised" faction going all ISIS on UNIT? Well, today we celebrate the Stonewall riots – though in fact today's self-styled "Stonewall" are the most "moderate" (read milksop) face of LGBT rights movement – and we sometimes only think of the more spiritual Martin Luther King's side of the civil rights movement in America.

ISIS are evil. But they aren't just evil. Likewise, the Zygon revolutionaries are not black and white baddies. (No, they're sort of orange… sorry!)


…anyway, time to skip to the speculation on how this might turn out!


Next Time… No next time trailer at all, which suggests spoilers, but it's called the Zygon Inversion so… They're ALL Zygons, aren’t they? All the UNIT people, anyway – hence operating out of a UNIT safe house instead of the Tower of London; hence evil-Clara saying "kill the traitors" rather than "kill the humans" – and maybe even the Doctor after doing a deal with the Zygon High Command – hence travelling by plane rather than TARDIS (isomorphic – one-to-one; or just not wanting a Zygon to be titivating the console). The importance of this would be to make the entire point of the episode: you didn't even notice the "good" Zygons, only the "evil" ones.
Posted by Millennium Dome at 10:00 am