In the latter half of the Twentieth Century, humankind discovered a machine that could take them anywhere and anywhen. It was called the BBC television series "Doctor Who".

But Russell Davies, who wrote "Rose" and was the mad genius architect of the series' triumphant Twenty-First Century return, said that every episode can be someone's first episode.

So we can start… anywhere.

Ext: Space. Darkness. The Earth, a lone beacon of light. Something is coming… 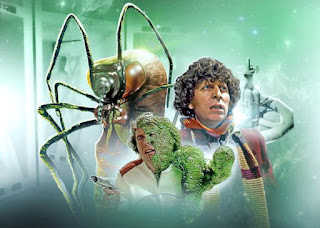 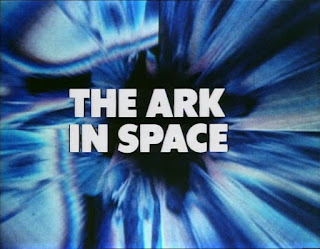 Ten Reasons To Watch "The Ark in Space" (warning: spoilers)


1. This is where "Doctor Who" really begins. That might seem a really odd statement about a series already four weeks into its twelfth year but… "Doctor Who's" twelfth, thirteenth and fourteenth seasons are widely considered to be a golden age of the show, massively influential on everything that follows, establishing or overturning the series "lore" about the Doctor, his home planet Gallifrey, the nature of the Universe and his powers of regeneration. And in a lot of ways that change begins here. Where Tom Baker's first episode, "Robot" is a gentle easing in to the character – or a hangover from the departing regime – here he transitions from comedic to alien completely seamlessly, literally and metaphorically leaving the Earth behind. The Doctor evolves from a kind of eccentric English inventor-cum-action hero into an almost elemental force of the universe, a Time Lord in actions as well as name, who walks in eternity and can sometimes be very alien and sometimes very childish, but whose best friends are human beings. And that is the show that survived fire and cancellation and returned stronger than ever.

2. The light in the darkness. At times, "Doctor Who" is apt to portray a Universe generally under the benign control of the Time Lords where evil occasionally breaks in, or as a Manichean battleground between forces of good (the Time Lords, the White Guardian) and evil (the Daleks, the Black Guardian) that are evenly balanced. However, the early Tom Baker era, when Philip Hinchcliffe is producer and Robert Holmes script editor is a much much darker place, a Universe where evil flourishes everywhere and there are only a few places where there is light and good and safety, constantly under attack. Grimdark has nothing on this!

3. Tom Baker is the Doctor. Every Doctor is someone's favourite. Sylvester McCoy is mine. But Tom Baker is, as his own incarnation would say without trace of modesty, the definite article. It's not just because he served seven years, longer than any other Doctor (Paul McGann doesn't, in this instance, count), more than twice as long as the typical three-year term – this is only his second story but already his charisma has stamped him indelibly on the role. Later, future Doctors will claim that their performance is inspired by the mercurial Troughton. But only because they cannot be Tom.

4. Elisabeth Sladen is Sarah Jane Smith. At one point Sarah Jane is trapped in the piping surrounded by monsters and the Doctor tells her how useless she is. Outraged she struggles through, intent on biffing him on the supercilious nose. Of course, he knew that that would be her response and it was the best way to inspire her. This speaks to the closeness of their relationship, their mutual trust and affection, and also to how human Sarah Jane is, fallible, foolable, and how "indomitable".

5. Ah yes, "Indomitable". Every so often, the Doctor delivers a speech that comes to define him, his attitude, his era and his place in time and space. Here, Tom Baker gets a really cracking one very early on that sets the tone for his first three years when he discovers the survivors of the human race "ready to outsit eternity" and goes into a soliloquy about his favourite species. 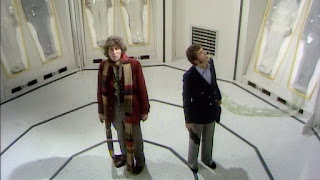 6. Robert Holmes does minimalist world-building. This is a classic Bob Holmes tale: his usual trick being – as it is here – to set a story in the aftermath (or many years after) enormous universe-shifting events, which the small cast of survivors can look back and comment upon. Here we are introduced to a "highly compartmentalised" future (actually way later than the thirtieth century space station that they've retro-fitted as their life boat) through the survivors of a cosmic cataclysm that has rendered the Earth first barren and then reborn as a new Eden for these Adams and Eves (if only there wasn't a space-age serpent grub in their nest, stealing rather than tempting them with their apples of knowledge). The sterile whites of their suits and their quarters and the formal language they use tell us all about this culture in very tiny glimpses. There was very little "joke" in the end times. Except for the working-class guy. He's totally out of place.

7. It's basically "Alien" four years early. For all its terrifying reputation, the titular "alien" is a man in a rubber suit with a funny head on; for all that it's made of papier mâché, the Wirrrn (the monster of "The Ark in Space") are terrifying space insects. What they have in common is that they both invade futuristic human settings, hiding themselves in the machinery down below, and adapt themselves by consuming the humans from the inside, starting with the engineer before taking out the rest of the crew including the captain, leaving a woman in charge. And (spoilers) get killed by a rocket at the end. But otherwise, not at all similar. 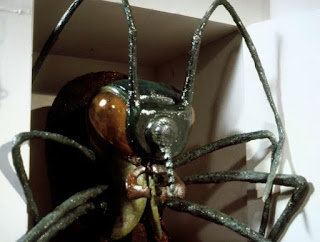 8. Women's Lib had, ahem, featured in the series before notably – or notoriously depending on your point of view – during Jon Pertwee's run when Terrance Dicks had, shall we say, old fashioned ideas of gallantry. Sarah Jane was explicitly brought in to talk up "Women's Lib" in often rather crushingly patronising ways. And even as early as the immediately preceding story, the powerful woman must be an evil ballbreaker (and quite possibly a lesbian) trope is played as hard as it can be. So it's quite refreshing that Vira (Wendy Williams) is accepted as leader without anyone hanging a lantern on it. (And even Harry's "fair sex on top" remarks about the (female) high minister are more lampshading his own dinosaur tendencies than patronising the successful woman.)

9. In another sign that this is like we are beginning all over again, the Doctor and his friends leave for their next adventure by transmat rather than the TARDIS. Back in the (real) beginning, the stories would run into one another, with cliffhangers between stories as well as at the end of the episodes within them, and with no overall onscreen titles (more on that story later) often there was no way to tell where one story ended and the next began. That's not quite true here, each block of episodes has one story title, but the season's stories do run one into the next in a continuous what might almost be called "story arc". Making it both 1963 and 2005.

10. Harry Sullivan is basically wearing socks in space for the whole adventure.


What Else Should I Tell You About "The Ark in Space"?

In an era when CGI makes almost anything possible for the series on television… millions of Daleks attacking the Capitol on Gallifrey – check; UNIT's London-based Death Star shooting down a rogue spaceship – check; ageing David Tennant a thousand years into a shrivelled neonate – I said possible, not sensible… it can be hard to remember that Doctor Who was famously (infamously) the sci-fi series known for the not so specialness of its special effects.

There are worse examples than "The Ark in Space" (most egregiously being "The Invisible Enemy" which really should have remained invisible.)

But here you have to put up with a visual representation of the Ark as seen from, well, space that is straight out of Herge's Adventures of Tintin; a horde of rubber Wirrrn; and one of the classic "washing up bottle" spaceships.

But no longer. Thanks to the aforementioned CG… hindered only by the cheapness of the BBC Worldwide budget for value added material… you can from the comfort of your DVD you have the option to watch replacement CGI for the exteriors of the Ark. 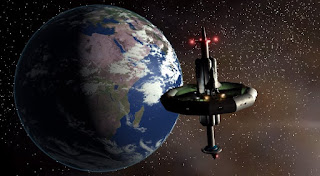 This was done for a number of the DVD releases, ranging from on the one hand the shonky ("Enlightenment" has some nice images but the story is poorer for editing down the running time) to the totally berserk ("Planet of Fire" has literally almost everything literally on fire. Plus, there's an am-dram teaser scene added that start that… just… no…) to on the other some actually quite decent work in the Extended Edition "The Curse of Fenric" (though again the story suffers from the curse of editing it into a "movie-length" cut which does not suit the pacing of the script at all) and the Special Edition "Day of the Daleks" (mainly a vehicle to get Nick Briggs to redub the Dalek voices "properly", but there's some nice effects dropped in too and for once they keep the four episodes as four episodes).

The very best of the bunch, though, are the Daleks' spectacular sixties-looking saucers rendered into "The Dalek Invasion of Earth", which are so good that they've clearly kept them for the new series.

You can watch this…


On DVD or on Thursday 26th and Friday 27th on the Horror Channel.

A cracking, terrifying way to begin. Sets out a whole new agenda for the series: the coldness of space, and the coldness of science, tempered by only the human warmth of the Doctor and his friends.

If You Like "The Ark in Space", Why Not Try…


"The Caves of Androzani" – Robert Holmes's brilliant future-noir, another minimalist sketch of a universe, but so much more bleak about human nature. Could almost be the anti-"Ark".

"The Beast Below" – a Steven Moffat story set in the aftermath of the Solar Flares, with another woman on top and another "something" lurking in the pipes. And it's nearly a Bob Holmes political satire (like "Caves…" although "Ark…" is not.).

But it's a much more lived-in future and optimism at the end is dangerously close to schmaltz.


Alex is watching "Robot". Of course.


Back, back, back to the very beginning. Of something. The TARDIS can go forwards in time, backwards in time and sideways in time.
Posted by Millennium Dome at 5:16 pm

Email ThisBlogThis!Share to TwitterShare to FacebookShare to Pinterest
Labels: Doctor Who, Doctor Who 52, The Ark in Space

I do wonder, though ... imagine this:

"At one point Clara is trapped in the piping surrounded by monsters and Peter Capaldi tells her how useless she is. Outraged she struggles through, intent on biffing him on the supercilious nose. Of course, he knew that that would be her response and it was the best way to inspire her. This speaks to the closeness of their relationship, their mutual trust and affection, and also to how human Clara is, fallible, foolable, and how indomitable."

Would we accept that now? Would we find it stirring? Patronising? Just plain naff? And if we'd receive it differently now from how we received the same scene in 1974, is it because Peter and Jenna are different from Tom and Liz? Or because we're different people from who we were in 1974? Or because the world itself has changed?