David Cameron is tearing down the British constitution before our eyes.

The Conservatories, apparently HIGH on the ARROGANCE of victory, have taken their WAFER-THIN majority to be a sign of DIVINE RIGHT and are rapidly moving to use any means, no matter how dubious or illegitimate, to extend their hegemony.

They've got the House of Lords in their sights.

Prime Monster Cameron clearly does not believe in of the British Constitution, written or unwritten. He tramples the traditions and conventions in much the same way Boris Johnson tramples small Japanese children.

Which makes him an anti-social Prime Monster and a pretty poor Conservatory to boot.

Instead of PRIMARY LEGISLATION (or even taking it to the actual PEOPLE in a referendum) he is sneaking around trying to nobble the noble opposition by the back door.

This week, we have already seen him and his incompetent henchling Chris Grayman manipulating the standing orders of the House of Commons to freeze out non-English members of the BRITISH Parliament (while further overburdening English MPs who do not have the support of devolved assembly members and thus actually WEAKENING the voice of the people of England).

And now they are threatening to flood the House of Lords with Tory Peers in order to create an UNEARNED majority (remember how they protest that the numbers in the Lords should be "proportional" to the election result – so they should actually lose Peers to match the 35% of the vote they scraped in May).

The alleged cause precipitating this crisis is the Tory plan to slash tax credits, taking up to £1200 away from people IN WORK on the LOWEST WAGES.

It totally makes a LIE of the Tory claim to be the "Party of Labour". And completely UNDERMINES the work of the Coalition in raising people OUT OF TAX to make being in work reward more the people who need it most. 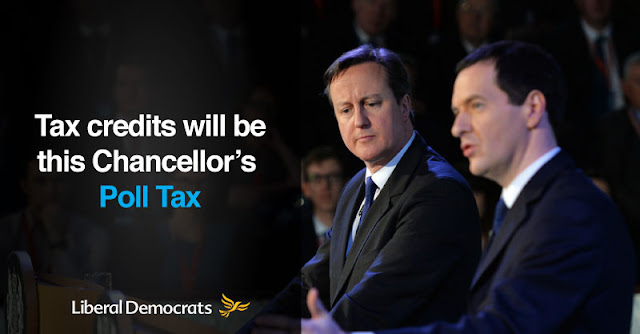 The Liberal Democrats have therefore tabled a "fatal motion" in the Lords to kill the cuts.

(While Labour have tabled a WEAKER, delaying motion, which the Lib Dems WILL support if Labour are too cowardly to support the fatal amendment).

And this has given the Prime Monster the excuse he needed to throw his toys out of the pram.

(It's worse because the Speaker is supposed to be neutral. He must of course act, within his powers, to defend the interests of the House of Commons. But he also has a duty to defend the people in whose Parliament it is his privilege to sit. If he goes over to the side of the Government – and it looks very like he has been persuaded to speak for the Government here – then frankly that's a resigning matter and he should step down.)

The Tory case for overriding the Lords hangs on two slender threads:

The first is the Salisbury Convention that the Lords do not overturn a Government's manifesto pledges.

Mr Cameron refers to the fact that the Tory manifesto contained a pledge to cut £12 billion from the Welfare Budget. Fair enough. But it did not specify from where within the Welfare Budget. However, the Prime Monster himself said that Tax Credits would not be cut. So how else can we interpret this but that that Prime Monstering promise was part of their manifesto pledge?

So to block the Tax Credits Cut, the Lords would actually be enforcing not overturning the Tories' manifesto, and it's hardly their fault that the Prime Monster is caught in the act of breaking his promise to the British People.

The other is the 1911 Parliament Act which says that the Upper Chamber will not block the will of the commons on Money Bills.

A "Money Bill" (it goes on to say) is a Public Bill which the Speaker says is a money bill.

(Or rather, in his opinion contains provisions dealing with a longish list of understandably tax and borrowing related subjects – in fact contains only such provisions, so you cannot just stick a small tax change in the "Invasion of Mars and Slaughter of the First Born" Bill and ram it through the Lords as a "Money Bill").

Importantly, it then adds that to be such a Bill the Speaker needs to endorse it with a certificate saying it is such before they send it up to the Lords.

So there are two rather glaring problems with what the Prime Monster and his government and his tame Speaker are saying here.

The Tax Credits (Income Thresholds and Determination of Rates) (Amendment) Regulations 2015 is NOT a Public Bill. It's what is called a Statutory Instrument (secondary legislation, using powers granted by an earlier bill to adjust the details – or another example of the Prime Monster dodging the full scrutiny of a proper bill, what a shame THAT came back to bite him on his Eton Mess).

And secondly, it would need to have a certificate of "do not touch" tied to the front.

So unless Speaker Bercow has done so, his threat to the Lords is based on a lie.

The Prime Minister, likewise, if he is saying that the Lords cannot block this is telling lies to the House of Commons.


The regulation was originally laid before Parliament in September and the government won by a majority of 325 to 290.

This week, Labour tabled an Opposition Day motion: "That this House calls on the Government to reverse its decision to cut tax credits, which is due to come into effect in April 2016", which was defeated by the government 317 to 295.

It would not have been binding on the Government, but losing it would have been… "embarrassing".

In the course of the debate, though, a number of Conservatories were reported to make "powerful" speeches against the policy… only to then troop meekly through the Government lobby at the end of the day.

I do worry that another sign of the Tories' fast march towards Chinese Democracy is to generate a SYNTHETIC opposition that is then shown to be entirely compliant with their wishes, doing away with the need for a Labour Party altogether.


Meanwhile senior, even normally entirely sensible Tories, continue to protest that the Lords will "provoke" a CONSTITUTIONAL CRISIS.

Be under no doubt. The Prime Monster was LOOKING for this CRISIS. He would have FOUND a PRETEXT.

And frankly, either we Liberal Democrats use what powers we have left to try to protect people from the cruelty of full-blooded Tory cuts or we might as well all go home.

So we should NEVER back down from this fight.

And the Prime Monster should remember too that Governments govern only with CONSENT.

Cite the 1911 Parliament Act all you like, if THAT is the precedent the Tories think they should follow, if they think it covers the Prime Monster for breaking his election promise, but REMEMBER your HISTORY – before forcing the People's Budget through the Lords the Liberal Government sought and received the endorsement of the people on the promise they were actually voting on in a GENERAL ELECTION.
Posted by Millennium Dome at 4:46 pm