This was Classic Who done in Classic style.

This was so old-school it was Quatermass, down to its mysterious etchings on the inside of its unearthed alien spacecraft.

This was so trad you could carve it into a dining table. And it wasn't ashamed to have characters announce the tropes they're riffing on: from "base under siege" to "Aliens" to "you can stay here and play cabin in the woods". Nothing wrong with that. Each generation deserves a chance to see why the classics became classics, especially if done well. Except it doesn't leave me much to talk about.

Although playing with tropes like "dead bro walking" still means you end up killing off the black guy first. (And what a waste of the magnificent Dr Muhahahaha.) 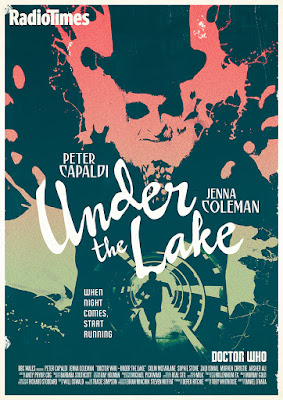 This was Toby "Being Human" Whithouse denying the reality of ghosts, only to whip the rug out from under us, only to whip the rug neatly back into place with a scientific non-explanation explanation: they're not ghosts, they're transmitters; transmitters that imprint a message on your mind and then kill you to start you signalling – the weirdest form of signal boost since six-billion iterations of the Master opened a route out of the Time War for Rassilon.

There must, incidentally, be something in the water (as it were), as I've just listened to "Prisoners of the Lake", the first of Big Finish's "new" Third Doctor Adventures with Tim Trelaw not quite being Jon Pertwee but not quite being his own interpretation either. (He can hit the lisping "s" very well, but I think hasn't quite the "attack" that Pertwee gives his line readings.) To be fair, Katy Manning's Jo Grant voice doesn't sound the same as she did in 1972 either, but with considerably larger store of goodwill. Nevertheless it goes some way to recapturing the feel of the UNIT "blood and thunder" era, at least for the first three parts; resolving itself rather too quickly in part four – limitations of the budget for cast seems most likely reason – when I was expecting it to break out into a bigger six-parter. (Because a three-and-three would have been a to-date unique variation on how to do a six episode Doctor Who). And the Brigadier, alas, is a sadly-missed silent voice at the other end of the telephone. Anyway…

Nice that we had a deaf character on board, fully integrated into the team. Nice that – as my friend Daniel pointed out – they showed that lip reading is hard. But wouldn't it be nicer if there wasn't a plot-contingent reason for her being there? (And "Hello, 22nd Century!" – fairly sure smart phones will do voice-to-text and text-to-voice really very nicely by then.)

Add to that a really picky quibble: the TARDIS translation circuits enable her passengers – or, if it's "the Christmas Invasion", anyone even randomly in the vicinity which must really help with staying incognito for all those non-interfering observation trips the other Time Lords make – to understand other spoken or written languages. But surely that doesn't include the shape of their lips flapping as they make the sounds. So why are the transmitters transmitting a message in English, when they're under the control of presumably an alien signalling to presumably other aliens?

Also, from what angle exactly do the stars in Orion's sword line up with Earth?

Actually the Doctor is wrong here, because only one of them really is a star – the three shiny things apparently hanging below Orion's belt are: the Orion Nebula (M42), which isn't any stars at all; the Trapezium Cluster, which is at least four, possibly eight, possibly more stars; and the star Hatsya (Iota Orionis) at the tip (and there's actually a couple more stars and the M43 nebula too, but they're all much less visible and the Doctor's only got so many tennis balls). Yes, the Trapezium Cluster used to be designated Theta Orionis (a star), but if he's going to be all showy-offy the least he could do is Google it.


All of the "bright three" are about 1350 light years distant. So if you can draw a line through them, it sure ain't pointing this way.

In fact the only place in the Universe where they line up with Earth is on Earth.

(Oh, all right, or in a direct sightline from Earth to Orion – but that's just getting silly: you need to know where Earth is to line it up to form the sword that's supposed to give you directions to find… Earth. Even the Battlestar Galactica would have had difficulty figuring the way to Earth with clues like that.)

Alternatively, "Sword of Orion" is the second of Big Finish's adventures with Paul McGann as the eighth Doctor. Which was exciting back in the day. So maybe the directions mean: "Go to that planet where Briggsy got to remake the audiovisuals with a proper Doctor and Cybermen".

Anyway, and once again I may be too "seen it all before" to appreciate that cliffhanger properly. To fresh eyes it may be quite the W.T.F. To me it's very obvious that the Doctor isn't dead, which actually dispels the possibility that the "ghosts" are the spirits of the deceased trapped in electromagnetic form. Plus it threatens to be "timey-wimey".

There's nothing intrinsically paradoxical about going back in time to investigate the origin of events that have occurred. In fact, it's something of a surprise that Doctor Who has never done a "reverse The Ark" (fifty minutes of story; leave; arrive 700 years earlier). Although actually, this is closer to "City of Death", where the Doctor (spoilers) uses the TARDIS to pop back – mid-adventure – to Leonardo's studio to check out what's going on with all those Mona Lisas.

But the cliffhanger gives the impression that going back in time, the Doctor has changed the past (and gotten himself killed) resulting in a change to the present (namely the appearance of his ghost).

(And obviously that doesn't have to be how it works out. If the Doctor is just using the "whatever it is that makes signal devices out the images of people who die hereabouts" to send a message to Clara telling her how to resolve the situation, then he can have "programmed" it to wait quietly out in the lake until after he's got back in the TARDIS and gone back in time. Because giggles. Well, no, because to avoid it being one of those irritating ontologically-paradoxical notes to himself from the future he used to leave for/in his seventh incarnation.)

But you have to admit we're stepping dangerously close to "I'll just jump in the time machine and fix this before it ever happened" territory, the sort of "Curse of the Fatal Death" stuff that the series has always said it cannot do. For the perfectly good (Doylist) reason that if he can do that, then there's no drama he can't go back and fix, and there's no excuse for any of the terrible things that happen in the series happening.


And haven't we played enough with "the Doctor's really, really, really dead this time" recently? From "The Impossible Astronaut" to "The Time of the Doctor" to last week's confession dial in "The One with Missy versus Davros"? (*episodes of "Dammit! Missy" not guaranteed to conform to Doctor Who content.)

If we'd perhaps established that the Doctor wasn't certain if the Time Lords had given him just one new life or many it would still be getting repetitive. But at least the threat of him being dead might make sense. Might even develop into a series theme there (too early to say though). But no, quite the reverse, in last year's "Kill the Moon" (yes, I risk mentioning it again; I know some of you have deleted it in favour of Semaphore) he actually raised the idea that he might go on regenerating forever. And even last week he was casually giving away regeneration energy, to Davros of all people, in no way as though it was going out of fashion.

So could we all get on the same page and put at least that trope behind us for a while.

For me this was really good, tense and gripping for the forty-odd minutes of its duration. And vanished like the ghosts in daylight. There was no sense that this was about something other than being a really good Doctor Who episode.

To be fair, it's a part one. It's full of setting up mysteries, investigating, asking a lot of questions, and, yes, a good bit of running up and down corridors. Running up and down very nice corridors and with a purpose. But corridor running, big tick.

Part two might change all that, which would be clever, to illustrate how discovering the past changes our understanding of the present (or future), and how and why the future is haunted by the past.

Until then, it's just a really good episode one.

Next time: reverse Agatha Christie warning as "After the Funeral" backs into "Taken at the Flood". With added fishy monster. Who's in the box? And will it all resolve itself? Avant nous le deluge. Let's step back "Before the Flood"

Posted by Millennium Dome at 12:00 pm

Well yes, but isn't it lovely just to *have* episode 1s these days?!