As the new season of Doctor Woo approaches, I thought we might warm up by reviewing one that we missed last year.

Of course, this was on in the running up to the Wedding of the Century™ when daddies got very busy sorting out their big day. Which is NO EXCUSE. Still, it certainly didn’t help that this one’s a stinker! 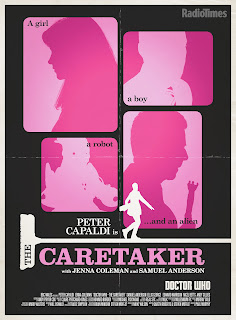 There’s a school that enjoys “The Caretaker” as a fun romp that advances the character’s story arcs.

I don’t. I loathe this episode. It’s full of people being horrid to each other. And has a really rubbish monster.

This is the episode where we find out what Danny Pink is really like. And it turns out he’s a monster too. Controlling, manipulative, and keeping his emotions buried beneath secrecy, he’s already half way to becoming a Cyberman. Maybe it’s that affinity and not that he’s so so special and wuvs Clara so so much that’s going to let him retain control in the (spoilers) season finale.

He protests that Clara has kept secrets from him, when he’s not telling her about his own past, he’s buried his own name and is staying buttoned up about the child he killed. He is outraged that she has lied to him, right at the moment when he has lied to her so that he can sneak around the school to find out about the Doctor. He unjustly accuses the Doctor of being the man to send you into a burning building when running into a burning building is almost literally what he caught the Doctor doing. His uncontrollable need to demonstrate that he’s the man means putting down Clara’s bravery and saying she ought to have been scared (like a girly), undermining her and trying to force her to be dependent on him. Not something that the Doctor ever does. By the end, he is possessive, jealous and possibly psychotic when he makes Clara give him an unkeepable promise to run to him when the Doctor steps over the line. The first thing Clara needs to do is run to the Doctor to tell him Danny has stepped over the line.

Clara though is far from perfect here either. The opening montage showing her rushing from adrenaline fuelled adventure to date to adventure to date, eventually almost breaking down but telling herself she can have it all… she’s showing every sign of addiction, including lying to everyone including herself. Her worst moment comes when she betrays the Doctor’s trust (not for the last time, either, this season) by stealing the invisibility watch and, faster than you can say Ring of Gyges, gives it to Danny so he can abuse its power to snoop on the Doctor. She too has almost psychotic breaks: snapping at the Doctor about space boglins when he leans through her classroom window to correct her on Jane Austin’s dates; and again when she starts to free-associate the most ludicrous lie yet about the very obvious alien incursion being a surprise school play. It is cringe-making to see her embarrass herself like this. But worse, no one cares: the Doctor and Danny are both expecting her to make them feel better – which indeed she ends up doing – rather than trying to help her when she so clearly needs them to.

So it’s just about possible that the Doctor is actually being the least unpleasant and irrational person this week.

When he tries to lure the monster into the school – as he explains it himself, the largest empty building – he’s trying to do the responsible thing. Is he responsible for the danger being there in the first place? He does say that it’s all the artron energy – presumably from all those TARDIS landings – that has attracted the threat. But then arguably he’s trying to clear up after the mess he’s made. And what responsibility Clara, when it’s all for her benefit that he keeps coming back here again and again?

The monster-of-the-week in question (other than Danny) is the Skovox Blitzer rolly-toy: armed to the teeth; capable of destroying the planet; and, as usual, unable to hit the broadside of a barn.

Why wasn’t it a Dalek? Functionally it’s a Dalek. It’s got the same shape in the plot as a Dalek… in fact come to think of it it’s got roughly the same shape as a Dalek in the physical sense too. And it’s not like they haven’t been actually in Coal Hill School before. (That would be the last time the Doctor was offered the position of school caretaker. Though he was a bit overqualified for the position.) It could even have been a white-and-gold Imperial one left over from “Asylum of the Daleks” the Shoreditch Incident in 1963 (“Remembrance of the Daleks”).

Because seriously sometimes you really do need to make the subtext the text.

And of course, Danny beats the Blitzer monster with… P.E. That ludicrous look-at-me spring jump. Given the way it talks – all sub-Mechonoid numbers mixed with language – would it have been totally beyond the wit of man for the writer (TV’s Gareth Roberts and Steven Moffat) to have him distract it with maths? (And of course you could not have done that to a Dalek!)

It’s not that the episode is without merit, or moments. That opening montage, if it weren’t so emotionally troubling. Capaldi’s wicked glee when schoolgirl Courtney says she’s a disruptive influence and he shakes her by the hand. And his “I may have a vacancy” line. And that she does get to travel in the TARDIS. Chris Addison as the unctuous afterlife receptionist Seb, and our little glimpse of Missy this week. Oh my god… she’s a bit busy.

Incidentally we get confirmation in passing that Missy’s heaven is the Promised Land mentioned in “Deep Breath” and “Robots of Sherwood”, even though the robots who’ve been trying to get there don’t really seem to fit with that once we find out that it’s a… but I’m telling you the plot.

And there’s an intriguing moment when the Doctor reveals that he thinks that he and Clara look the same age. And given that Clara is wound all around the Doctor’s timeline, then from the Gallifreyan point of view, it’s not impossible that that is exactly what they do look like to him.

But these are like glimpses into another – better – story, possibly some kind of black comedy assembled from these parts but… funny.

There are a lot of times where – and I may be totally misreading it here, in part because one of the writers is Gareth Roberts who is famously witty and the other is award-winning comedy writer Steven Moffat, – we appear to be being invited to laugh at these people, as though emotional distress is supposed to be funny. Chunks of this have the shape of a farce – Clara running down corridors; the mistaken identity of Clara’s boyfriend; the whole “hilarious” parents evening and the monster must never meet. And then they do the thing that farce cannot do and “drop the plates”, have the thing that mustn’t happen happen, i.e. have Danny actually collide with Clara’s other real life. And instead of hilarity ensuing, we just get spikes of raw pain.

Back in Moffat’s first season we had a roughly parallel arc for Amy and Rory. Amy ran away with the Doctor for “secret” adventures behind Rory’s back, but also kept secret from the Doctor that she had a boyfriend (whom she loved); halfway through the season we had a turning point – “Vampires of Venice” – where the Doctor and Rory collided, and Rory got to tell the Doctor a few home truths. And then Rory evolved. Okay, maybe he got killed a couple of times too many along the way. But he became a person who held his own in the TARDIS crew, and supported Amy’s choices and was worthy of her.

“The Caretaker” is no such turning point. Danny rejects all the choices that Rory takes, rejects all the wonders that are on offer in the Doctor’s magic box, and never grows into a better person.

Of course Danny is free to reject those things. That’s his choice. That doesn’t make him a bad person.

But what makes for poor storytelling, why this is poor in comparison with season five, is that “Doctor Who” – always seen as transformative – has no such effect on Danny.

(What does make Danny a bad person is that his tries to reject those choices for Clara and the Doctor too. He knows best. So he needs to control the Doctor by labelling him “an officer”, putting him into a box. He needs to control Clara by putting her into a “relationship” where only she needs make promises to him and he need make none to her (because he’s the boss). That’s why Danny’s a monster: because he will do anything to control other people. That’s what has always defined the villain in Doctor Who.)


At the time of broadcast, we didn’t know that that was the way the series would go; we could have hoped that this was a – deliberate – low point and that the characters’ behaviour here would be seen to be mistakes from which they learned and put things right. Instead, everyone will carry on making the same mistakes and worse lying and covering up so as to stop others seeing they are making the same mistakes.

People do behave like that in the real world. But they are not healthy and happy people. And “Doctor Who” has a responsibility to say to the audience: treating other people like this is not good.

Nobody wins today. When this happens in “classic” Doctor Who – in “Warriors of the Deep”, say – the Doctor sees that it is a disaster and at least has the grace to decry the carnage with a “There should have been another way”.

“Warriors of the Deep” is better than this.


Next Time… Do not get your hopes up for ALL the missing episodes… last time I said I’d try that the diary entries fell off a cliff again. But IF we manage it, next time we discover the ultimate Kinder Surprise and face the ultimate moral dilemma… without the Doctor. Another episode that divides fan opinion. Which way will I vote? And will Clara choose to “Kill the Moon”?

Posted by Millennium Dome at 7:30 am