Here's a cynical thought for a fluffy toy: the Prime Monster is making a lot of FUSS about the BBC "empty chair-ing" his Conservatory Candidate in the B'Eastleigh By-Election; is this a DRY RUN for the Prime Ministerial Debates?

We know he's expressed "doubts" about facing Cap'n Clegg and that Milipede bloke in 2015. Could he have decided – with this by-election slipping from his fingers – to write-off his chances here and instead test the waters, and the BBC's mettle, for a Prime Ministerial no-show in the debates?

Would they really have the BALLS to Empty Chair him?

Turns out, that they probably WOULD have the Balls.

(No, not MR Balls – they'd have HIM for the Chancellor's Debates!)

And now the PM is testing the waters with his "Blame the Beeb for our failings" posturing.

"The candidates are more important than you," he says.

Well, actually, your Balloonship, the VOTERS are the most important, and your candidate ought to be up to facing them in an open hustings.

Your excuse that Ms Hutchings was unable to attend because she was with you at the time will not wash ...because the hustings was organised first.

"Maria Hutchings regrets she is unable to attend due to a SUBSEQUENT engagement."

It also turns out that the event with you wasn't until 45 minutes later. At a location 10 minutes' walk away. As attested by the journalist who attended both.

Now you might want to DISMISS this as just the HURLY-BURLY of a by-election – I'm sure that the Conservatory Chair-person the accident-prone Ms Shapps (not his real name) will try – but we need to make sure that they DO NOT GET AWAY with this.

DEMOCRACY requires that voters are INFORMED and that representatives are ACCOUNTABLE. 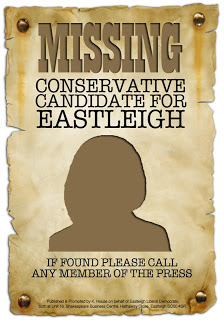 And the VOTERS aren't DUMB. They can TELL. It might SEEM like the SAFE option to keep your candidate out of the FIRING LINE... especially if she's getting a reputation as a LOOSE CANNON... but it's really not.

Daddy Alex tells me of when HE was standing for election in STEVENAGE, and the Conservatory was Mr Tim Nice but Dim Wood. When HE didn't turn up for a public hustings and my Daddies always said he could not have done himself more HARM by showing up than he did by CHICKENING OUT!

Mr Balloon changed his diary to give Ms Hutchings her excuse. What if he changed it again? And again? Should all the other candidates all be held hostage to fit his convenience? And if – as seems to be the case – he doesn't think his own candidate is FIT to FACE the public, should he get to stop all the other candidates from facing the voters' questions? No, the answer is clearly not!

If he IS field-testing his responses for the General Election we HAVE got to let him know that he has FAILED!

The BBC were QUITE RIGHT to use the Empty Chair on the Missing Maria. And if it comes to the Prime Ministerial Debates and Mr Balloon is another no-show, I hope that they stick to their guns and do it again!
Posted by Millennium Dome at 12:00 am