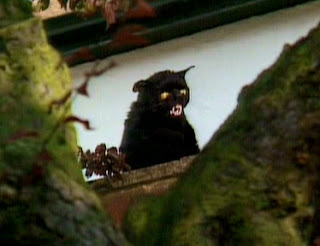 With an ESSEX LION on the prowl, it's a good time to look back at the PERIVALE CHEETAH.

Obviously, I'm NOT afraid of cat-monsters... but I must now go and look after Mr Stripy behind the sofa while Daddy Richard tells you all about it!

"Survival", like "The War Games" and "The Horns of Nimon" before it, is the last ever episode of Doctor Who. And, like those previous stories, it stands Janus-faced both as the capstone to one era of the series and as gatekeeper to a new and greater one.

It is a source of bemusement to many people that Doctor Who was still being made in its twenty-sixth year, a bemusement almost as great as the utter bafflement of those few millions still watching the show that the BBC chose to suspend it following this season.

For me, season twenty-six is one of the truly great seasons, up there with season one, seven, eighteen and twenty-seven, or the glorious Hinchcliffe era; a season which consolidated the huge steps forward in storytelling and production that producer JNT and lead writer Andrew Cartmel made in season twenty-five, so that the show was finally back on track. "Ghost Light" and "The Curse of Fenric" are as complex and "timey-wimey" as anything by Steven Moffat while "Survival" is widely regarded as not just the springboard for the "New Adventures" but as a prototype for "Rose", with its mix of urban landscape, high concept and situation comedy. And in production terms, the Destroyer ("Battlefield") and "Fenric's" Haemovores are easily up there with the likes of the Slitheen and the Judoon in terms of appearance (and of course Mike Tucker went from doing effects for season twenty-six to doing effects for season twenty-seven with only a decade of Red Dwarfs in between).

It doesn't all work (see the DVD extras for Mike Tucker's explanation of why a robot kitling was never going to work) but most of it does. Alan Wareing's direction is very fluid and modern. Dominic Glynn's music, particularly his guitar themes for the Cheetahs, capture the mood of both boring Perivale and terrifying Cheetah-planet. And the guest cast (with maybe only the exception of a one or two non-speaking members of Midge's track-suited gang) are all excellent: the younger members all going for it with intensity, while Julian Holloway brings a very believable, very human confusion and bloody-mindedness to Sergeant Paterson. And Anthony Ainley... well, we'll come to him later.

In another throw-forward to the Russell Davies era, the monsters of "Survival" are both anthropomorphic and, after the fashion of "Buffy the Vampire Slayer", allegorical. The Cheetah-people may not quite live up to the delicate masks of the Cat-people ("New Earth" and "Gridlock"), but the spirit is willing and, thanks to the writing and work under the fun fur above and beyond the call of duty by Lisa Bowerman, audio director and eponymous star of the Bernice S Summerfield adventures for Big Finish, they have some real heart.

"They are essentially a fun loving species," says the Master, later echoed ironically by the Doctor, by which he means they – like he – are entirely hedonistic, serving only their own carnal desires, whether for food or "play". Juxtaposed with Sergeant Paterson's "survival of the fittest"/"leave the weak behind" social Darwinism, it's perhaps the most subtle and yet most cutting critique of Thatcherism of the Cartmel era (and, by extension, of the whole series). For the Cheetah-people there is literally no such thing as society – as Kara demonstrates when she admits that she would enjoy hunting Ace even as she welcomes her as a new Sister.

The Cheetah-people are allowed a kind of nobility, though, even if it's a bit "white-man's idea of the savage"; where it gets really nasty is when the Master brings it to Perivale and begins turning the local self-defence class into his own little fascist gang. There's something deeply nasty about the way that a cult of the individualist can be used to turn people into a pack or a herd.

This isn't just lefty wish-fulfilment though, literally "monstering" the hated right. Notice how Ace proposes collective action to counter the Cheetah-people, but – in a hint of "Animal Farm" – her leadership only propels her towards "joining the other side".

Speaking of "going over to the other side", it's compulsory to mention that there's something fairly Sapphic going on in Ace's relationship with Karra. All of that Moon symbolism and calling each other Sister and running together. To be fair, between Glitz and Mike Smith the Nazi sympathiser she's not had a lot of luck with men, admitting in "Fenric" that "I used to think I'd never get married", and I'm sure that Susan Q gave her a lot to think about in "The Happiness Patrol". (Never mind, though, the New Adventures are on the way to very thoroughly straighten her out.)

Undertones aside, this is really a lot of what the 'Eighties probably called "women's studies" as though it was necessary to be derogatory about growing up and discovering yourself as an independent person capable of your own agency. Again a la "Buffy" Ace is becoming empowered as she is literally super-powered – never mind all that "run forever" stuff; she can, at very least, teleport across the galaxy.

Then again, there's an interesting question there about exactly where the Cheetah-people's planet is to be found. The novelisation suggests the far side of the galaxy, but I have the more interesting notion, remembering that "Battlefield" has already done "sideways in time" this season, that the planet is actually the Earth: the essential wilderness of Earth in the way that the Cheetah-people are revealed to be the wildness within people.

The idea that the world is being destroyed by conflict is another one that the Cartmel era has touched upon before (and again with less subtlety).

And if we're going to talk subtlety we have to mention that this is one of the few scripts that allow Anthony Ainley to show what he could actually do as the Master. It is probably the first new, interesting story for the character since, oh, "Logopolis", maybe even "The Deadly Assassin" (hilarious goings-on in "The Oseidon Adventure" retconned in in between, aside).

To go all Freudian for a moment, the Master is the ultimate Ego, and here we see him being torn apart by the ultimate expression of the Id. There is a power here, as he says, but it's not one that he can ever have without abandoning everything that makes him him. The possibility of embracing it, accepting it as a part of himself – which appears to be Ace's solution – simply does not, indeed cannot occur to him; everything must be a struggle and must be subjugated, not surrendered to. (The stuff about willpower probably alludes back to the Doctor's conversation about Nietzsche in "The Curse of Fenric", too, although it's also the sort of thing that the Master was always going on about in his 'Eighties incarnation.)

And while we're looking at the id, ego and super-ego we can also see how this story represents a completion of Ace's personal journey through what "Babylon 5" would call the "three ages of man": control by our base instincts; control by our parent figures; and freedom. Sophie Aldred speaks of how in "Ghost Light", "The Curse of Fenric" and "Survival" Ace goes through a trilogy of facing her past, present and future fears. But another reading is to say that in "Ghost Light" she overcomes her instinctive behaviour, learning to understand and adapt; then in "The Curse of Fenric" she confronts and leaves behind the forces that control her represented by Fenric (and, to an extent, the Doctor); so that, by "Survival" she is an adult woman, free to make her own choices.

The Master, here, is also, of course, the ultimate 'Eighties consumer. Look how he buys Midge's affection with clothes and toys. And, like a good little Thatcherite, how he discards Midge once he's no longer useful. No neo-feudal obligations to his employee for this Time Lord turned baron of capitalism. Or perhaps – to stretch the political metaphor – he's a prescient incarnation of Mr Blair: power-hungry, he adopts the trappings of the Cheetah-people's culture without understanding how it will destroy him. Does the reveal of his glowing evil eyes in the first cliff-hanger not make you think "New Labour, New Danger"?

And yet, although "Survival" is undoubtedly political, from Ange's passive/aggressive collection for the hunt sabs – contrast that with the morality of the Cheetahs' hunt – to the shopkeepers pressured to open up on Sunday (yes, even the Hale and Pace bit), it's not about politics.

(Actually, it's a great tragedy for our public life that people don't see "politics" as anything to do with the day-to-day lives of the body politic. Witness again Ace's attempts to rouse her friends to action and their apathetic response. "Yeah, yeah, the government's evil and wants to eat us, but leave us alone to eat the bracken.")

What we're really seeing is a confrontation between the Wild Magic and the High Magic, between chaos magic and order. The Doctor and the Master are Wizards (or Angels – and in Tolkien those are much the same thing anyway), they are Time Lords, Lords of Order. Only by rejecting that simple binary conflict, by surrendering instead of fighting, does the Doctor escape.

And, of course, that's the Doctor's solution from "The Curse of Fenric" too – in war, the only winning move is not to play. Only this time he's the one playing one of the pawns.

See also – those who so often accuse the Doctor and particularly the seventh Doctor of not getting his hands dirty – how he puts himself in harm's way rather than allowing Ace to face off against Midge for him on the motorcycles.

"Only the creatures of this place can leave, because they carry it with them," or as Mephistopheles might have put it: "Is this not Hell nor am I out of it."

And so, fittingly for Doctor Who's very own fallen angel, the Master confines himself to Hell in the end.

And it is the end. The Doctor has kept his promise from "Dragonfire" to show her around the galaxy and back to Perivale in time for tea. Ace has completed her trilogy. Dorothy Gale has her "East, West, Home's Best" moment. "Home?" asks the Doctor. "The TARDIS!" And Dorothy McShane is ready for her New Adventures.

"There are worlds out there where the sky is burning, and the sea's asleep, and the rivers dream. People made of smoke, and cities made of song. Somewhere there's danger, somewhere there's injustice, and somewhere else the tea's getting cold. Come on, Ace — we’ve got work to do!"

Andrew Cartmel wrote the Doctor's final speech with the thought that it might be the final speech, and the aim to break your heart. And it does break my heart, a little, even now, even though this wasn't the end, merely another "last ever episode".

It's impossible not to think that Paul Cornell (and Russell Davies) was inspired by that speech when he wrote the "He burns in the centre of Time" eulogy for "Human Nature", but that's a speech in praise of a god. "...and somewhere else the tea's getting cold..." isn't the speech of a god; it's the speech of someone who gave up being a god to go travelling with his friends.

And we're travelling with him still.


PS: Doctor Who returns Saturday at 7.20. But you probably knew that.
Posted by Millennium Dome at 4:00 pm

Email ThisBlogThis!Share to TwitterShare to FacebookShare to Pinterest
Labels: Doctor Who, reviews, Survival