The Foreign Office's recent threat to INVADE ECUADOR was a new LOW, managing to break the LIBERAL Principle of internationalism, the CONSERVATORY Principle of maintaining traditional values and the REALPOLITIK principle of not giving anyone else the excuse to do it back to us, all at once!

Mr Vague was clearly having an OFF DAY or (more likely in the middle of August) a DAY OFF. Thankfully, it seems we’ve backed down. But we NEVER should have said that.

But aside from that (Mrs Lincoln) how was the THEATRE surrounding the Eva Peron of the Embassy: Mr Julian Estrange? 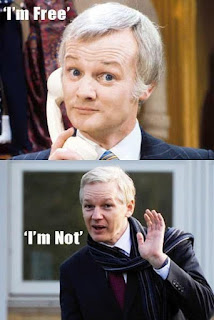 What more is there to say, really?

On the one fluffy foot, there are a lot of people who believe that he is facing very serious accusations of sexual assault against two Swedish women. To be fair, that’s not a statement of belief – it’s a statement of fact.

On the other fluffy foot, there are another lot of people who are convinced that Mr Estrange is potentially in danger of being whisked away to Americaland and quite possibly executed to death.

So what we have to do is weigh the ACTUAL HARM that has ALLEGEDLY HAPPENED against the POTENTIAL HARM that MIGHT HAPPEN and might be greater or might not even happen at all.

If ONLY we had some kind of SYSTEM where independent arbiters could be appointed to look into this and, er, JUDGE which course of action is right.

The case has been distinctly NOT helped by some of Mr Estrange's (self-appointed) advocates trying to suggest that there might be some circumstances where inserting your willy into a woman when she doesn't want you to might be (brace yourselves) "a bit less rapey" than others.

These people need to read what Mr Andrew has to say:

The ONLY way you should ever end a sentence that starts “It’s not rape if…” is with “all parties involved consent.”

The question of whether Mr Estrange has committed a criminal act is properly one for the COURTS of SWEDEN to decide, and that is what the Swedish police were trying to do.

The question of criminality, though, however STUPID the things people are saying might be, is at least more to the POINT than the wider excuse being used, namely that Mr Estrange is FAMOUS and has CROSSED AMERICALAND and so should not have to face charges at all.

It is almost certainly TRUE that Mr Estrange IS deeply disliked by the government (and probably most of the people) of Americaland because he was behind the Wikileaks website revealing all their secrets and deeply embarrassing them.

And Americaland does NOT have a good record of behaving in a JUST and LIBERAL manner to people who deeply embarrass them. The treatment of the soldier who LEAKED the Wikileak sounds dreadful. And we all know that Guantanamo Bay has become a byword for American contempt for international law and due process. Nor has President Barry O covered himself in glory on this issue, pursuing a policy of raining death on anyone his government decides is a terrorist. (NOT, so far, including Mr Estrange.)

And it is ALSO true that SHADY governments (up to and including OURS) have been more than happy to manufacture allegations of SEXUAL IMPROPRIETY and MORAL CORRUPTION against "enemies of the state" because it's much more convenient to ruin someone's reputation than martyr them for freedom. It is sufficiently common an idea as to have been used in BBC Sci-fi "Blake's Seven", where the TOTALITARIAN Federation – yes, like the one in “Star Trek” – has rebel leader Roj Blake all ready to plead guilty to sedition when he learns he's actually banged up on charges of child abuse.

But just because it COULD happen does not mean that is HAS happened. Fortunately for Blake's Seven we KNOW that Mr Blake is all heroic and honest because we've seen what really happened. That's NOT the case here – we do not KNOW if Mr Estrange is guilty as charged or guilty of being fitted up.

Again, if ONLY we had a SYSTEM for deciding whether the Swedish have a sound basis for wanting to put him before their own courts.

Because Mr Estrange has made all of these arguments before and has lost at every stage of his appeal. You may very well think that the prosecutor was over-zealous in this case, or that the Swedish police have been heavy-handed in demanding extradition, or you may feel that the police SHOULD come to the accused criminal or that governments SHOULD agree to the terms imposed on them by suspects... but the fact is these things have been examined and found to be acceptable within the rule of law.

Check out these five MYTHS about Mr Estrange's case – line them up and shoot them down.

So his supporters are reduced to claiming it is ALL an establishment plot against him.

A conspiracy that takes in the Swedish police and prosecutors, several British courts, and the CIA NOT kidnapping someone off the streets of London when they can... well, it's certainly one for the Internet theorists.

(Though admittedly it's not quite up there with that one about the Olympic Stadium being built on a confluence of LEY LINES so that the GIANT LIZARDS who SECRETLY RUN THE WORLD could FAKE an ALIEN INVASION under cover of the CLOSING CEREMONY in order to institute a WORLD GOVERNMENT in fulfilment of the MASONIC PROPHECIES of WILLIAM BLAKE.)

But this is a case where NO ONE is going to WIN.

Of COURSE Mr Estrange ought to go back to Sweden, for all the reasons stated that is the proper place to decide his case. There are two women in Sweden – and a man in the Ecuadorean Embassy! – who have a right to justice. And I completely sympathise with Auntie Caron for her passion to see justice done.

But I’m afraid I have to agree with Mr Stephen O’the Glenn that we must respect International Law FIRST.

You CANNOT uphold the law by BREAKING it.

ALL THREE of those people are being denied justice. But we cannot break into the Ecuadorean Embassy to enforce that. Not because of any potential harm to Mr Estrange, but because of all the potential harms caused if we toss aside the Vienna Convention that says that once you're inside an embassy you are SAFE.

So Mr Estrange has escaped to Ecuador (no matter that it's a bit of Ecuador in the middle of London). A huge police presence around the embassy is a waste of resources and he could STILL get away in a big enough diplomatic bag; and sabre-rattling makes us look pathetic.

There are lots of STRONG ACTIONS that we can suggest… NONE of which we will be able to take!

So let's just leave him there, and much good may it do him.

Posted by Millennium Dome at 8:30 pm