Today was the BEST day of Conference! My favouritest MP Sarah Teather was on stage TWICE! She opened the debate on headteachers and then had a speech all of her very own later on.

The story about HEADTEACHERS is very interesting: everybody remembers Sir Mr the Merciless’s first question at Prime Minister’s Punch Up Time.

Lord Blairimort said it WAS often difficult to find a leader for a failing organisation.

When we compare how EASY was the dignified search for a Liberal Democrat leader to all the DIFFICULTIES of the Labour scheming and spinning and backstabbing as people try to get their grubby fingers on the leadership of the Labour, I finally realise that Lord Blairimort was RIGHT!

My lovely Sarah spent much of her speech in giving the Labour a good old TELLING OFF for how very rubbish they have been!

No wonder our teachers are getting DEPRESSED, what with getting a new bit of guidance from the MINISTER every two-and-a-half-days:

“Write a thesis on the Schleswig-Holstein question!”

But rather than showing any initiative, Lord Blairimort’s “reforms” have been no more than a series of BLINGED UP Conservatory policies… and now, Mr Balloon has reduced the Conservatory response to “Me too!”

The Labour think that the answer to any problem is setting more TARGETS from the centre, but my Sarah does not think so:

“One size does NOT fit all – I should know!” How I LOVE her!

Instead we should be investing in children from the early years – not locking up the money in a bank account for twenty years in order to give students a VERY SMALL cheque… that won’t go very far towards the Labour’s VERY LARGE student tuition fees.

Investment could be targeted on speaking and listening skills, a MISSED STEP in our drive to get children to read and write.

And (Sarah’s little joke) the Labour could probably benefit from some early years listening skills!

But we should also be looking to make the education system be about what the CHILDREN want and need, not about meeting some poorly perceived national target set by the centre. And we should be more FLEXIBLE, not forcing pupils of fourteen into one box marked “ACADEMIC” or another marked “VOCATIONAL”.

Sarah told us the story of her own trip to school to collect her GCSE results. It was NOT this year she laughed! In the car they listened to people saying that the results only showed that the exams were getting easier. And this was only the third year of the new exams!

This year we have had another Groundhog Results Day with the same soundbites from both sides: the government saying look how marvellous we have 102% pass rates in maths and kompleet sucksess in Inglich; the opposition saying things aren’t as good as they were in our day.

The real point is that we DO NOT KNOW, because unlike other countries we do not have small test groups of pupils tested with the SAME test from year to year in order to be able to COMPARE.

This seems such a good point I am surprised that it took someone of my Sarah’s GENIUS to point it out!

But the lovely Sarah was not the ONLY person making a speech today.

Our shadow chancellor Mr Vince “Power” Cable was also on the stage, presenting us a lecture with slides, and he has been very good enough to let me borrow one: 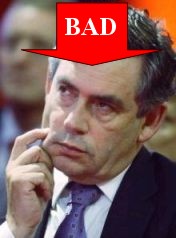 Mr Vince is very clever: you can tell how BIG his brain is from his VERY SHINY head. He has worked out that Mr Frown MIGHT be the next Prime Minister!

His speech was billed to us as BLISTERING ATTACK on Mr Frown, and it is TRUE, Mr Vince pulled no punches. He said:

Still, it is only fair to point out that when Mr Frown says he is the bestest Chancellor since America was run by King George (err…) that mainly this is because he did the Liberal Democrat policy of making the Bank of England independent. This has kept interest rates lower and the pound higher and so cheaper workers have come in to do the jobs we don’t want to which keeps costs down which keeps inflation down which keeps interest rates down…

Mr Vince said that this was a VIRTUOUS CIRCLE. Although it might just be more Labour SPIN!

Unfortunately it could all go BELLY UP! What with the entire nation being in hock to its eyebrows, one nasty oil shock and we’ll all be REPOSSESSED!

In the meantime, since he’s not been looking after the economy, Mr Frown has spent his time coming up with ever more COMPLICATED schemes for doing STUFF – like tax credits and private finance initiatives, strategic five year plans and replacing Lord Blairimort with himself.

All of which have kept Mr Frown out of the nation’s hair but cost a bit of a FORTUNE.

It was time for Mr Vince to put the nation’s economy on a proper footing. He wants to find Fifteen Billion pounds of savings. (Actually, we have now learned that you can save Eight Billion pounds by abolishing VAT fraud, so we are half way there already!)


Another speech billed as part of the attack on the failures of the Labour was that of Mr Simon Hugs. Unfortunately Mr Hugs’ speech was less about the Labour and more about how he was cross with us for not voting him first or second in the leadership election. Still, he has FORGIVEN us and will therefore consent to stand again as President of the party.

There were a lot of rumours that someone was going to stand against Mr Hugs for the role of President, but nothing appeared to come of this.

Now is the time for confession: I WAS going to stand as Party President, but unfortunately my campaign manager – that Pink Dog – got a bit OVER-EXCITED at the Blogger of the Year competition and filled out the WRONG FORMS for me. So now I am nominated to be President of Federated States of Micronesia. And even Mr Bartlet has trouble remembering where THEY are!

Mr Hugs went on to pay tribute to people who have given TREMENDOUS service to the party over MANY, MANY years: Lord Dohlakia who has been in the party for FIFTY years; Stan, the president of Mr Hugs own local association, who has seen SIXTY years in the party; and of course, Lord Bonkers whose EIGHTY years in the party have seen us out of power for almost three generations.

Mr Hugs promised he would follow their examples. Erm.


So it has been a great day for speeches!

Oh, and Daddy Alex has been getting lots of laughs by reading Sir Mr the Merciless’s new JOKE BOOK!
Posted by Millennium Dome at 7:54 pm