No one should expect to just GET to be Prime Monster!

Liberal Democrats should call for a Vote of Confidence in Parliament before ANYONE can be appointed Prime Minister, and we should demand that the Fixed Term Parliament Act be updated to make this explicit in law. 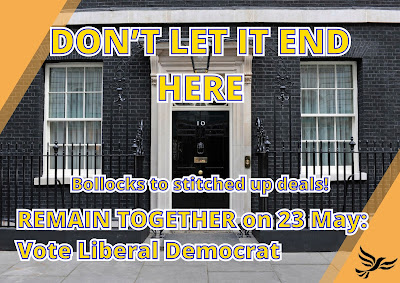 Boris Johnson looks very likely to win the contest to become leader of the Conservatory Party, already framed as “the race to be Britain’s Next PM”. And, given that he keeps dodging any questions, he could win with remarkably little scrutiny from either his fellow MPs or the public.

AND there’s the little question of whether he can “command the confidence of the House of Commons” as the saying goes.

The rules governing how you get to become Prime Monster are written down in the Cabinet Manual, last updated at the start of the Coalition, by GOD (that is THE god, Mr Sir Gus O’Donnell, not the deity).

That’s where it says, in big letters at the start of Chapter 2:

“A government holds office by virtue of its ability to command the confidence of the House of Commons, chosen by the electorate in a general election.”


It would be shockingly unconstitutional – but I think also HIGHLY PLAUSIBLE – for Bojo to park his clowncar in Downing Street, installed as PM on the say-so of Theresa Maybe Not with NO opportunity for Parliament to test that he CAN command a majority.

Chapter 2 of the Manual gives us all the details of how a government is made.

So what happens when the Prime Monster changes?

The Prime Monster MUST resign IF they lose a General Election and someone else has an overall majority (s2.11).

The Prime Monster MUST resign (because of the Fixed Term Parliament Act) IF they lose a Vote of No Confidence and are unable to pass a Vote of Confidence within 14 days (or if someone else IS) (s.2.19).

IF the administration has an overall majority, then the Party or Parties in government get to choose the new Prime Monster (s.2.18).

2.20 Where a range of different administrations could be formed, discussions may take place between political parties on who should form the next government. In these circumstances the processes and considerations described in paragraphs 2.12–2.17 would apply.

Firstly, the incumbent government (TMPM) is entitled to wait until Parliament has met to see if it can command a majority (but is expected to resign if it’s clear that it won’t) (s.2.12)

S2.16 is IMPORTANT because it says that the government can ONLY operate on RESTRICTED POWERS for as long as there is doubt over whether it can command a majority.

Finally s2.17 says what kinds of government can be formed: a minority government, winging it from vote to vote, like Hard Labour in the Winter of Discontent; a confidence and supply agreement, like we have now; a formal coalition.

Reader, two Conservatories HAVE said they would vote against their own government to stop Boris Johnson and prevent no deal.

I think it’s pretty clear that things ARE in doubt whether ANY new Conservatory Prime Monster, and certainly Mr Johnson, could do the commanding of a majority.

But who is going to tell Mrs the Queen? Let’s ask the Manual…

2.09 “In modern times the convention has been that the Sovereign should not be drawn into party politics, and if there is doubt it is the responsibility of those involved in the political process, and in particular the parties represented in Parliament, to seek to determine and communicate clearly to the Sovereign who is best placed to be able to command the confidence of the House of Commons.”
And that’s the big big problem because you and I both know that this government is going to say “there isn’t any doubt”.


This government or probably ANY government, but this one already has a track record of never doing anything by the rules unless someone loads up the Supreme Court and points it at their heads.

On EVERY occasion, this government has taken “TAKE BACK CONTROL” to mean “SEIZE POWER FOR US!”

This government more than any other has shown repeatedly that you cannot trust it to let Parliament – the representatives of the people – have their proper say.

So what makes you think they will stick to a convention that says “if there is doubt” they have to talk to Parliament?

“As the Crown’s principal adviser this responsibility falls especially on the incumbent Prime Minister, who at the time of his or her resignation may also be asked by the Sovereign for a recommendation on who can best command the confidence of the House of Commons in his or her place.”


…but the current Prime Monster in Name Only, Theresa Maybe Not, is NOT a person who is as good as their word. Far from it, she promised many times that she would not hold a snap election… then held a snap election. She promised many times that we would leave the EU on March 29th … and then didn’t leave the EU on March the 29th.

More to the point, the story goes that when she lost the Conservatory majority in 2017, she allegedly lied to Mrs the Queen saying straight-up that she had the support of the DUP when in fact the billion-pound deal was only secured a week later. The Palace, it is said, were furious.

But again there’s your problem, right there. No action has been taken.

In order not to be SEEN to be political, the Palace lets fibbing in the dark go unpunished. There’s no one to bring them into the light of day.

Take also the case of the Sun’s “Queen Backs Brexit” headline, which was more than a little calculated to turn a few votes in the Referendum. Their source was a Cabinet Minister, widely believed to be Michael Gove, then leader of the Leave campaign. Surely a clear case of drawing the Crown in to politics.

If the convention had ANY teeth, the Referendum would have been voided there and then. The Sun would have been fined the full cost of mounting the process. Michael Gove, if indeed it was he, would have been summarily dismissed as an MP and never allowed to stand again. None of this happened.

It is transparently safe for the wicked to flout convention.

To paraphrase Sir Desmond Glazebrook, of Yes Minister, the whole system relies on good chaps behaving as good chaps, and a good chap can never accuse another good chap of not being a good chap because that’s not the behaviour of a good chap, and well, that’s where it all falls over.

Remember those RESTRICTIONS on what government can do when the ability to command a majority is in doubt?

Those restrictions start with:

2.27 While the government retains its responsibility to govern and ministers remain in charge of their departments, governments are expected by convention to observe discretion in initiating any new action of a continuing or long-term character in the period immediately preceding an election, immediately afterwards if the result is unclear, and following the loss of a vote of confidence. In all three circumstances essential business must be allowed to continue.


And I think that means that until Boris or whoever is confirmed as the new PM by a Vote of Confidence, they should not be allowed to make a major change of policy like leaving the EU with no deal (in contravention of everything the current incarnation of this government has tried and failed to do, and against the repeated expressed will of Parliament).

But short of yet another date with the SUPREMES in Court, who is going to ENFORCE this?

An aspiring Prime Minister should be OBLIGED to bring a Motion of Confidence to the House of Commons, laying out their plan for government, so that it can be debated and voted on, BEFORE they can become PM.

Whether their Party is in a majority (when they shouldn’t have a problem with that), or planning to run a coalition (and their coalition partners would probably like to know), or trying to run a minority government (as is the current case), then Parliament should be able to pin them down and hold them to account.

The policy statement wouldn’t be enforceable, as such, but breaking it in some way – like saying you will try to do a new deal with the EU and then going for a “no deal” crash out – would obviously be grounds for a No Confidence vote.

And it needs to be in an Act of Parliament, because then people will NOTICE it, and especially JOURNALISTS will notice it, and EXPECT IT TO BE DONE.

Think this is unnecessary? Ask yourself: how many people are considering this Constitutional nicety right now? Answer: NONE. Everyone EXPECTS that whoever wins the Tory Leadership WILL BE Prime Monster.

It is so much easier to dodge these bits of the Constitution that only exist in papers, conventions and precedents. Look how this government HAS DONE THAT.

We are Liberals. It is OUR JOB to stop people just GRABBING power. We should not accept this. And we need to say so.
Posted by Millennium Dome at 10:40 am

Thnk you for saying all this. So very important and so universally overlooked (e.g. Channel 4 naming their hustings show "Britain's next Prime Minister" as though that's a given).

I wonder whether you could write it up with the comic names removed and send it to the Guardian, the Spectator or somewhere like that?

I agree with Mark Taylor. You should take it to ALL papers minus the comic names and distribute it ON THE NET.