That which is dead cannot die…

(Yes, we were in New England for the first broadcast of “Dark Water”.) 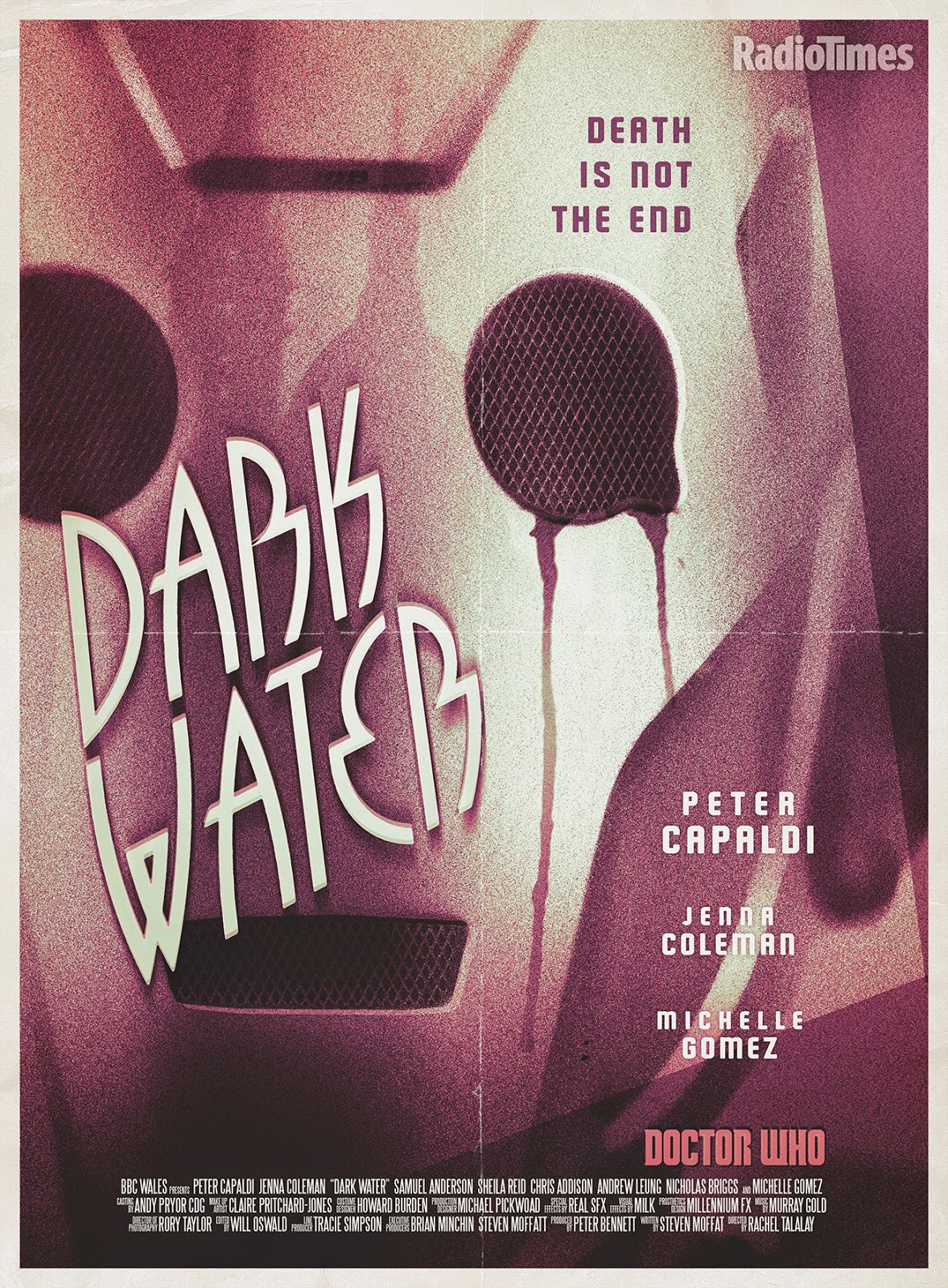 Re-watching the two-part season finale has helped me to appreciate it. My first viewing, I realised, had been overshadowed by expectations and inferences drawn from the previous week’s teaser. In fact, I’d go so far as to say I was, for the first time, spoiled by a “next time” trail. Not “spoilers” in the River Song sense, but spoiled in that the trailer constructed a story in my head that was better than the one we ended up with.

(I fear it’s not the first time – or the last – that I’ve thought of a better story– I remember doing it for a ‘Mr the Supreme Dalek’ back in Russell’s day, but I think it’s the first time I’ve done in in advance!)

Just to warn you, I’m going to range freely over plot points from both episodes, though I’ll generally focus on the Cybermen for this review and more on the Master in what I write about “Death in Heaven”. But maybe not in my titles!

I would have liked to say that “Dark Water”/“Army of Ghosts” (whatever) is the very definition of a Curate’s Egg, except that I recently learned, via comments on Mr Hickey, that this would actually mean it’s properly rotten but I’m finding good things to say in order to crawl to Steven Moffat.

So instead I’ll stick to saying that it’s “good in parts”, and mean it.

And I’ll start with the good parts, because that’s pretty much what “Dark Water” does. Because clearly, the best of the episode is the first ten minutes, up to Clara’s desperate face-off with the Doctor on the Star Wars volcano planet. That turns out to be a dream. Or (in context of this series’ themes) a lie that the Doctor is telling her.

And everyone knows the best line of the whole year was: “Do you think I care so little for you that betraying me would make a difference?” Probably best we didn’t use that in our wedding, though.

After that it descends into more ordinary larks with Cybermen. But larks that are very much informed by where we’ve just come from.

“Dark Water”, you see, is going quite a long way towards exploring just why people might turn themselves into Cybermen: it touches on Clara’s grief and anger and denial; it explores Danny’s guilt and regret; it glances at the possibility of life continuing after death and the fear of what that means for bodily decay and violation.

The death of Danny Pink, in an ordinary, boring car accident, is an incredibly powerful and brave way to open this story.

Whatever you think of Danny’s complex character, whether you think he was the abusive controller or the abused victim of Clara’s lies, he was a real, complicated, normal person trying to do what he thought was right. And the awful suddenness of his death is both terrible and true. He’s there and he’s gone. There’s more of a lesson about death in that silence at the end of the phone than any number of disintegrations or Daleks can teach.

Funnily enough, I’d been saying just that day that no one had really done a Cybermen story properly.

The Cybermen are the fear of death. They are people so afraid of dying that they replaced everything that makes life worth living just to carry on existing and then buried themselves in Tombs so that they would not pass on. It’s a well-established horror trope that the modern zombie is a death-metaphor: gruesome, shambling and inescapable. And, particularly in Steven Moffat’s interpretations – from “The Pandorica Opens”, but re-stated with a vengeance here – that is exactly what the Cybermen are: corpses in shiny armour; hi-tech zombies.

The first Cyberman story, “The Tenth Planet”, hints at this through techno-mummies wrapped in plastic bandages, but is tied up in fears of the machine, the intrusive penetrating replacement-part surgery taking away that which makes us human. After that they are quickly relegated to robo-commies – the faceless army of infiltrators who want to take away our freedoms and take over – as substitutes for the tin-pot fascists the Daleks for face offs against the second Doctor’s “destroy all monsters” crusade. Later Eric Saward will fetishize them as machismo incarnate, all “Man” and no “Cyber”. And Russell Davies’s scoop-and-serve brain-in-a-can versions seem to recognise the iconography without getting the idea behind it. To be fair to Moffat, at least he seems to “get it”.

And yet “Dark Water” still doesn’t tell that story. For some unknowable reason, it just skips the punchline, straight past it (well, straight-ish now she’s genderqueer, I suppose) to hilarious shenanigans with the Master…

(Not that they aren’t really good shenanigans – that reading the scrolling text is an hilarious reference to the opening of “The Deadly Assassin”; Missy pretending to be a robot is surely an insane in-joke about the robot Master played by Derick Jacobi in “Scream of the Shalka” – but even so…)

We almost have to infer that that story, that better story takes place. Sure, the Doctor gabbles something during “Death in Heaven” about the Master preying on the fears of the rich to set up the 3W tombs, but we’ve just missed all of that story entirely.

And that’s a shame because surely that was the whole point. If the Cybermen taking us unwilling from the grave is the zombie form of the Undead, surely the flip side is the vampire making the devil’s bargain: foreswear love (emotions) for eternal life. That is the deal that Danny is offered but it feels… unconnected to the 3W plot even though it’s central to their operating procedures.

It’s typical of why I feel I am ambivalent about these episodes. While they are pretty good, occasionally brilliant, they leave me with the nagging feeling they could, indeed should have been better.

And, of course, it’s typical of Moffat’s writing, to expect the viewer to fill in the blanks for him, whether that’s a sign of how much confidence he has in his audience or just an example of his flighty jumping from idea to idea without ever developing them to their potential. But I’m getting ahead of myself.

The entire plot seems to hang on a kind of “voodoo”. (Maybe it’s Faction Paradox technology.)

Why bother with all the bones and the graves at all if you can just put any mind in any tin can? It’s clear that the minds of the dead have some genuine connection to their mortal remains through which they are able to animate their cyber-converted body.

Which means that Missy really has harvested the minds of millions of dead people.

The BBC were – for very good reasons – quick to come out and say that it was all a big fib by the Master, that this really isn’t what happens to people after they die…

…except, that’s really not what the episode is saying at all. We are presented by the Doctor with the possibility that the Danny that Clara is talking to is a fake, a projection from her own mind psychically scanned by 3W… but to the audience, Danny is clearly real: he’s been having an independent story of his own. Likewise, the boy who Danny is revealed to have killed while soldiering could similarly be a fake from reading Danny’s mind. But why bother when it seems that the dead can be found in the Nethersphere for real. And really, if you need a load of minds for your Cyber-army, what would be the point of faking them?

It seems very clear that whether there is a real afterlife or not, Missy has interposed her Matrix data slice between this life and the whatever or nothing that comes hereafter. And is torturing everyone she brings there with real or simulated post-death agonies to get them to agree to deleting their emotions.

Which brings us back to Danny.

Of course death is not the end. Not in a Moffat story, anyway. Thought if death was the end, there wouldn’t be a story. And while it may turn into yet another lurve-conquers-all schmaltz in “Death in Heaven”, at least the ending of “Dark Water” suggests a more interesting ambiguity that Danny’s guilt over the boy he killed is simultaneously pushing him towards deleting those emotions and keeping him from doing it, because to do so would be a betrayal of the very feelings that are driving him.

A better story – and I’ll look more at the better stories not told next time – a better story would have explored that ambiguity more. Because that’s the line that separated human from Cyberman.

When the White Guardian (aka God) threatened the Doctor with existing without changing I said that that was death: the icy, frozen death of cold logical perfection. And put like that, it’s obvious that that is what the Cybermen are. They bury their emotions and carry their own tombs with them in the form of that armour.

Of course, the Cybermen get thrown under the bus yet again, as they are turned into an army of boring robots once Missy comes out in all her bananas glory.

Next Time: “Death in Paradise” starring Ben Miller. No hang on, wasn’t he in a different one?
Posted by Millennium Dome at 7:30 am