Superficially, a piece of stylish fluff after “Ocean’s Eleven” or TV’s “Hustle”, even to the slo-mo entrance and how-they-did-it flashback.

But, Saibra, a shape-shifter just dying for someone to see the real her, and Psi, a human computer who casts aside his memories and his past, could almost be wearing signs saying “we’re aspects of the Doctor”. And a descent into the Plutonic underworld, the minotaur-guarded labyrinth, to unlock the heart’s desire might just make this the most heavily symbolic episode yet in this series that seems intent on “unlocking” the Doctor’s psyche. 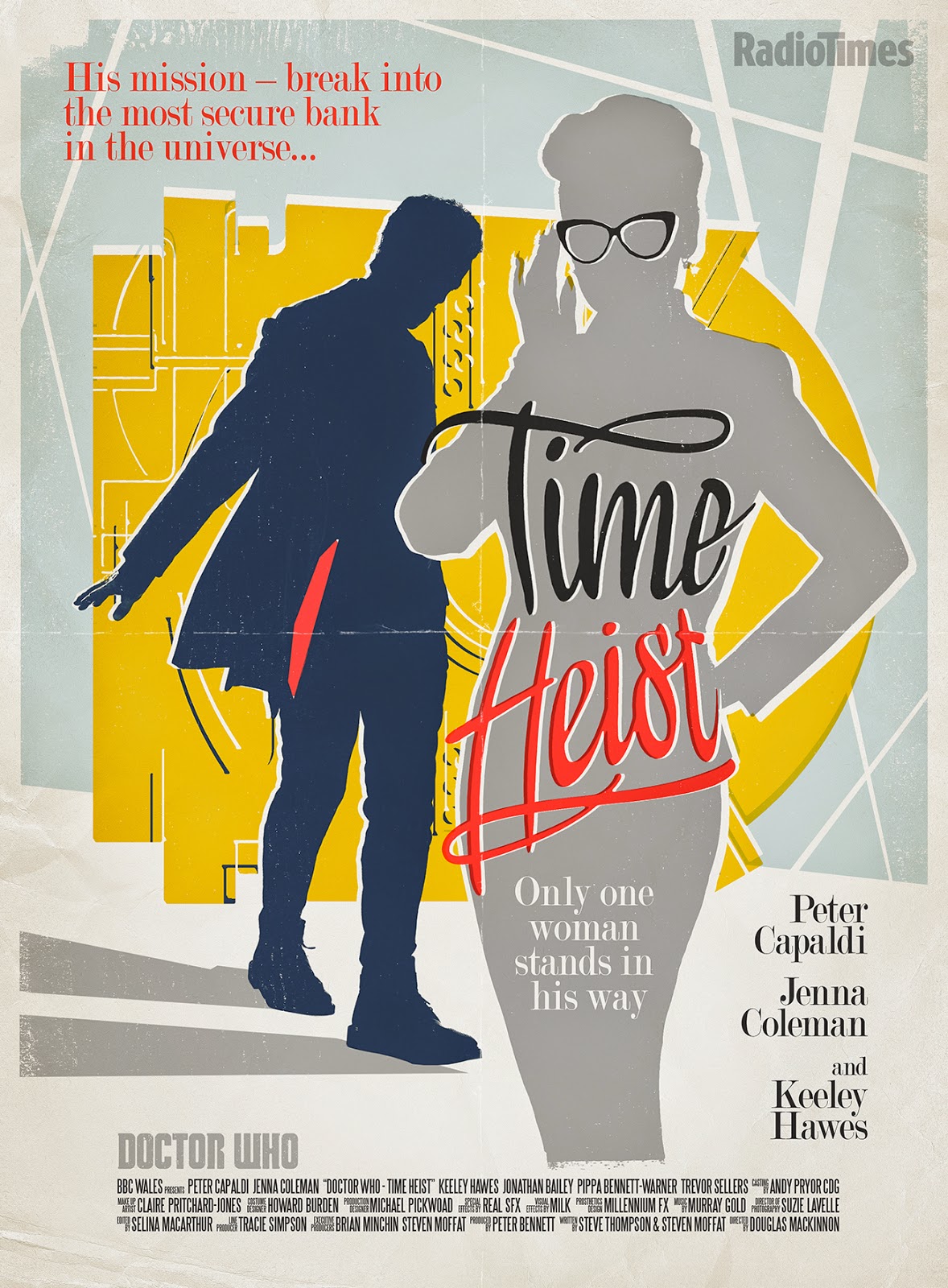 The much talked about “change of tone” for season eight seems less of a specific new direction and more a real effort to grasp the series defining ethos of change. With a different kind story every week, Victorian mystery to space war, historical romp to urban horror, they’re almost taking us back to the Hartnell era for diversity of story modes (and oh look, there’s a Sensorite between Androvax from “The Sarah Jane Adventures”, Captain John from “Torchwood” and Daffy Abslom Daak from the pages of “Doctor Who Magazine”). And they’re not so much defining Capaldi’s Doctor as any one thing, yet, but throwing a whole lot of things at him to see what he does with them all.

So let’s look at the Doctor’s psyche this week: a mix of seventh Doctor cunning, first Doctor scorn, and a dash of sixth Doctor braggadocio (“What you need right now is ME!”). And I forgot the eighth Doctor amnesia!

Let me toss a theory out there: each episode so far this year is looking at a side of the Doctor’s character, in fact one of his character flaws: “Deep Breath” represents his self-doubt; “Into the Dalek”, obviously, hatred; “Robot of Sherwood” is cynicism; “Listen” clearly fear; (and of course “The Caretaker” will be all about the Doctor’s jealousy); so, this week – well, given how secure the “securest bank in the Universe” turns out to be, it’s tempting to say we’re talking about his insecurities, but it’s pretty flagged up that really this is all about guilt.

The beautifully designed Teller creature feeds on guilt – and I love the twist of satire that I read on the Net that the bank is quite safe from their pet monster because bankers feel no guilt; harsh but fair. The reveal at the end that the escapade has been initiated by the guilt – as regrets – of the bank’s director, Madam Karabraxos. And the thing the Doctor desires most in the Universe, (or at least appears to) is to make the Teller not the last of his kind, the “survivor guilt” that has plagued the Doctor since Gallifrey, even if he now never foomed the homeworld after all.

Admittedly, the “monster actually pining for his mate” is a rerun of the ending of “Hide”, but rather than being a handbrake turn in a scary-movie story, this felt like a natural twist in a story mode where twists are the order of the day. And it’s not like it wasn’t flagged up ahead of time: the Guantanamo jumpsuit and chains, and the Doctor even asks what hold the bankers could have over the Teller.

And what sort of Teller would the richest bank in the galaxy employ anyway? Obviously a fortune teller.

Mind-reading you to death was new and grotesque. I liked that. And made a good counterpoint (and cure) to the reuse of the Memory Worms, previously established in “The Snowmen”. And the monster is still a monster, in the end – it still turned a whole lot of people’s brains to soup. The Doctor just found a way to deal with it that didn’t involve killing it. Interestingly, the Doctor doesn’t pass judgment on that either. Perhaps it’s not his place to mete out more guilt.

Okay, so “Time Heist” is yet another ontological loop: the Doctor becomes involved because Madam Karabraxos calls him on the number she only had because the Doctor became involved. Perhaps I minded it less this week because I didn’t really notice until I thought about it afterwards. It’s fridge logic: you only notice it when you think about it later.

(Unlike the “if he could set it all up, why couldn’t he have just used the TARDIS?” question I’ve seen on the net. They’ve thought of that one: the Doctor even says robbing a bank is easy if you’ve got a TARDIS. But the last lock on the vault can only be opened by the sun exploding(!) which is the one moment that they can’t use the TARDIS. And as for the complaint that the air vents with the “Do Not Enter” signs on are way too big and easy to get into… well of course they are: they lead straight into the Teller’s tank; they are very obviously a trap!)

Unless, of course, the Doctor, as a Time Lord, can just create ontological loops at will – which it certainly looks like he does, just to drag Clara away from her date, an interpretation reinforced by the last moment of the last scene.

Perhaps this one is about his jealous ego after all.

Actually, there are plenty of ways that it does fall apart – surely it’s a bit unlikely that Ms Delphox would leave the big door unlocked after catching the Doctor and Clara in the vault, so how did they get back in after being captured? But if they don’t need to get into the main vault to penetrate the private vault, then why break in there in the first place? And obviously the biggie: why does no one notice that the solar storm is going to destroy the bank?

I’d like to say I forgave it because at least Steve Thompson’s script was showing signs that he’d thought about some of the flaws and set up answers for you to pick up. But perhaps it’s just that I was just having too much fun watching this to notice or mind those as it went along.

And it’s a bit rude of me to just reduce Saibra and Psi to cyphers for the Doctor. In spite of their brief screen time, they both came across as distinct and interesting characters played with a proper sense of the fun that a heist story can be. It was a proper shock when Saibra was got by the Teller and her smart realization of what the “way out” would be. Psi’s decision to sacrifice his empty/forgotten life for Clara was perhaps a bit sketched because of the episode’s runtime, but came across. And for once the “no they’re alive” was less of a sentimental Moffat trope than a genre-appropriate “fooled you!”.

(Does it count as an “everybody lives” if the Teller’s victims are sitting around drooling with their heads caved in? I would say not, actually.)

And they are genuine Lawrence Miles-esque posthumans! The series very underuses the idea that the human race will have a future beyond homo sapiens and – sure, maybe because they borrow all the clichés – these people felt like they were coming from a genuine future culture (or cultures). The bank itself, for that matter, with its mixed clientele and staff in African, Japanese and European couture – not to mention being a big old pyramid – came across as proper transgalactic, too.

Jonathan Bailey as Psi and Pippa Bennett-Warner as Saibra looked good in the roles and looked like they were having a good time doing it. I wouldn’t mind if the Doctor’s “call me” gesture to them at the end led to them returning.

Meanwhile, Keely Hawes is a wonderful and subtle actor playing both Ms Delphox and her boss Director Karabraxos, and managing to make the latter just slightly more human, ingeniously conveying the brittle, hollowness of the clone – again, online complaints that Ms Delphox is just a caricature, a typical Moffat “strong woman villain in black suit and heels” (to be fair, reinforced by Doctor Who Extra making the same point), fall down because that’s exactly what she’s supposed to be – it’s a choice that both confirms Karabraxos’ opinion of Delphox as a “pale imitation” while telling us that it’s possibly the powerlessness and fear of a literal firing that makes her a different person. It’s quite a clever take on the old nature versus nurture debate – Karabraxos puts it down to “nature”: she thinks the clones are by nature inferior to her original; she cannot entertain the possibility that she is not superior, merely lucky to be in the top position. Would she even have felt regrets if the Doctor hadn’t planted the idea in her head? Another paradox, but again, for me, a pleasant tease rather than an annoying flaw.

Anyway, if it is all about psychoanalysing the Doctor it might add some weight to the idea that “Missy” is indeed inside the Doctor’s head, and Clara’s references to the Doctor’s missing conscience resonate too. (Missy, missy, miss…ing? Nah.) This is the second week running without reference to the series arc – baring the briefest reminded about “the woman in the shop” who gave Clara the TARDIS telephone number, and that more as a lead-in to the unlikeliness of the phone ringing… ooh, it’s ringing…. But then this is the “hiding in plain sight” episode, so who knows what might come back to bite us.

If there’s a downside to the “a different story every week” format, it’s that you know from the outset that you’re going to get divided reactions to all of them. And I can see why this wouldn’t be for everyone, just as I can see why “Listen” pushed so many people’s buttons but not mine. It makes for a roller-coaster of a series, but one with Peter Capaldi at its heart and always dragging us back to see how he reacts to the next trick out of the bag. His superpower, clearly, is to be the centre of attention. It’s the eyebrows.

Next Time: We’ve done horror. We’ve done heist. Let’s try… a rom com. The horror! The horror! All that stands between the Doctor and a fateful meeting with Clara’s boyfriend is a guy in a bow tie. Oh, and a sort of clockwork owl on castors. With really big guns. There’s been a spillage! Call “The Caretaker”.
Posted by Millennium Dome at 11:00 am