There are two problems with my writing a review of "Robot of Sherwood". Pressure of work is one, and the other is that beyond saying it was laugh-out-loud hilarious but that ending with the golden arrow is a total fail, what is there to say? And everyone else has said those things already. 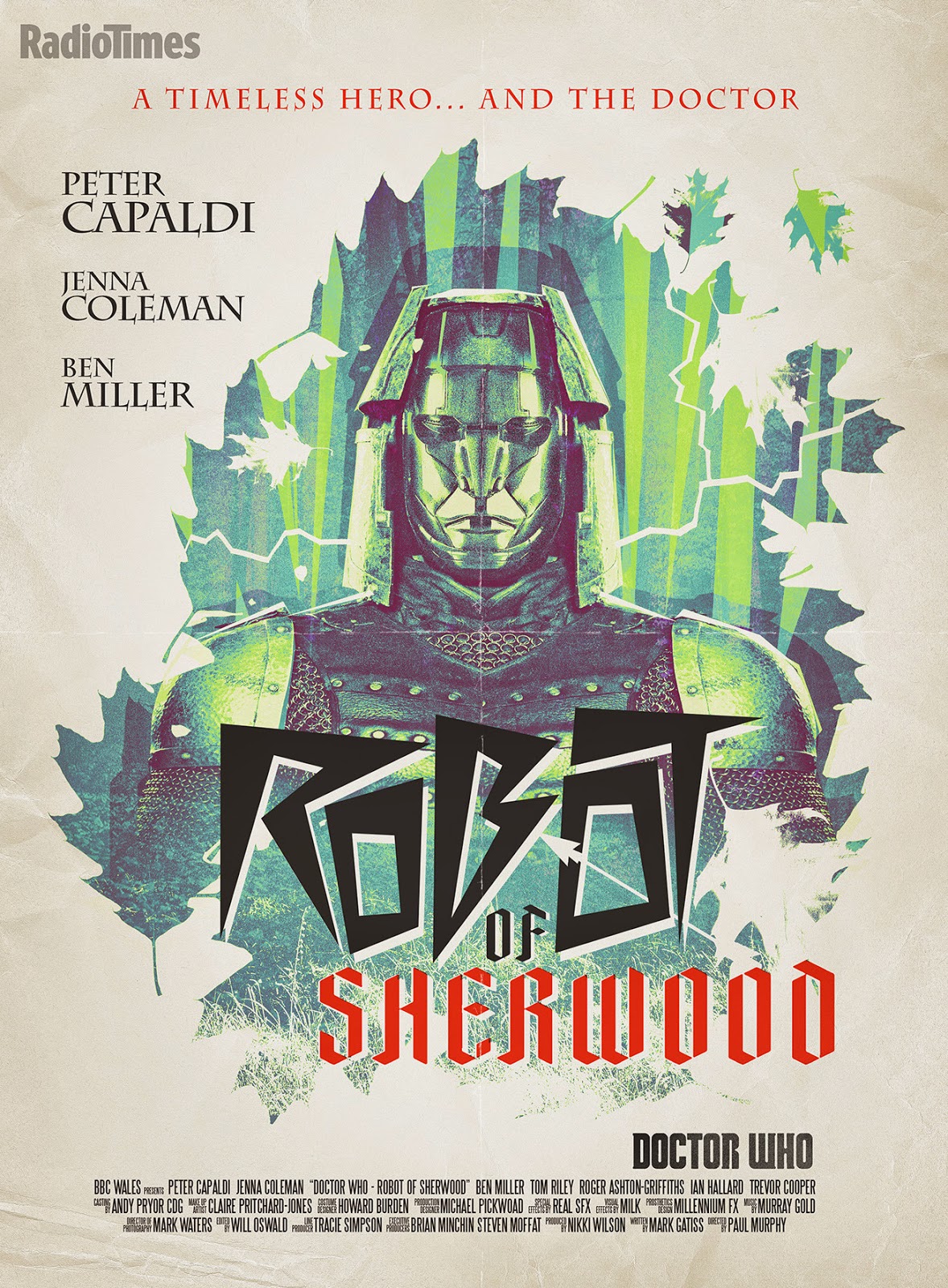 Capaldi is a great comic actor, and here he's at his most Malcolm Tucker-alike, especially in the exchanges with Robin in the dungeon. Dressed in black, getting robbed by Robin Hood, he's very nearly the villain for the first act, particularly the "thwarted again" face Capaldi pulls when dunked in the stream. Which is great, but might be a danger. He's got such range, it might be better to let him find new ways of being funny, rather than writing for the Doctor as the acerbic spin doctor. Shades of writing for Bonnie Langford as "Bonnie Langford".

The message was a bit blunt force trauma as well: Clara spells it out before they've even left the TARDIS; Robin hammers the point home at the end. Yes, we get it, the Doctor is a hero, one of the iconic figures of British myth, to stand alongside Arthur, Gloriana and Sherlock. And of course, Robin.

Having spent a year deconstructing his own legend because it cast too long a shadow, though, his denial that Robin could be real just didn't ring true. He's not a stupid man; he would see the reflection. If the Doctor had been trying to tell Clara "you'll be disappointed; heroes never live up to the legend" it would have fit more with this newly self-doubting Doctor. His initial friction towards and mockery of Robin would have had a more solid foundation in his own psyche. And the journey towards liking the outlaw, seeing the man under the bluster, would have been more personal, of self-acceptance.

It was a good story for Clara. For once – finally – I could see the "control freak" tendencies. Though what happened to "my only pin up was Marcus Aurelius"? Squeeing over a Robin Hood is a lot closer to "young men performing sport" than "flirting with a mountain range". But the moments where she allows Tom Riley to uncover that Robin is more than just that guy whose laughing face you want to punch bring out the good teacher in her. And the scene between her and Ben Miller's delicious Sheriff of Nottingham, where she turns the tables and convinces him to tell her everything was excellent for the character. Very reminiscent of the Doctor doing something similar in the one really great scene from Gatiss's earlier "The Idiot's Lantern"; clearly Mark writes a good interrogation.

Though it's a shame the full reveal of the Sheriff's cyborg nature was dropped for entirely sensible reasons, as it would have added the twist that he lied to her too. Miller was a great villain as the Sheriff, just the right side of over-the-top ham. And I liked that he would undercut some of the more ludicrous clichés – "You'll live to regret that... actually, no you won't", or "that would be a ridiculous plan". Like Robert de Rainault of "Robin of Sherwood", or Blackadder (to Robin's Lord Flashheart) he brings the sensibilities of the modern viewer to the land of make believe. The (pardon the pun) cut slightly derailed a more interesting twist that he'd been literally rebuilt in the image of the legend. Though, again, the story could have done with a little tightening – if the robot knights had made themselves a Sheriff in response to a real Robin Hood, it could have tied up some of the story's contradictions.

Essentially, the story sets us up to expect this to be a fool. It's too good to be true, too true to the legend to be good.

And the scene where Robin goes into the moat with Clara – and is under for a long time – and then emerges carrying her Frankenstein fashion... That and the flip archery certainly look like they're trying to tell us he's a robot too.

So we keep expecting the other shoe to drop. And it doesn't . I suppose I should be praising that, given how absolutely by the numbers Gatiss ticks off the key Robin Hood plot points. But dramatically it feels off. If Robin were real but everything else faked by the robots reacting to him based on their faulty foreknowledge, that could work. But it's not. The Merrie Men are real, the splitting the arrow archery is for real (at least Robin's is). Yes, we get a bit of hand waving about the radiation leak making Sherwood CinemaScope green, but that's to explain something the Doctor's quibbled about rather than a cohesive story element.

The spaceship that disguises itself as a castle is very proto-TARDIS, a point that nothing is made of. And then there's that bit with the arrow. Was it scripted that the arrow should fly through that hole the robots had blasted earlier and strike the controls? (People who've read the leaked scripts will know.)

Obviously Gatiss has been going through those Robin Hood moments – the log over the river, the archery contest, the big fight with the Sheriff – but all nicely undercut and peppered with references to the Pertwee era, clearly a Gatiss favourite. Mention of miniscopes, and Capaldi's hilarious "Hai!" karate chop. But the biggest influence is season eleven opener "The Time Warrior", to the point I was expecting Dan Starkey to cameo as Field Marshal Swag on video link to the spaceship control room, demanding what they were doing with the Sontaran's robot knights. Which might be why the conclusion – shoot the arrow; castle explodes – deviates from the Hood myth (King Richard arrives to put all to rights. ish).

Or it's just as crushingly banal as the end of "The Shakespeare Code" (must use historical guest star's "superpower" to resolve plot. Somehow).

Only a brief nod to the arc this week. Or maybe two, if the Doctor's chalk and calculations are going somewhere. Obviously we've got more robots looking for "the Promised Land". Where, indeed, do all the calculators go? Which may or may not be Missy's heaven. It seems to be a real place though, which might count against the rather good theory I heard from The Pharos Project podcast: "heaven" is inside the Doctor's head, a place where he's remembering all the people he's killed. Making Missy his conscience. Which would be why she's a bit... broken. (Missy... My self... Nah!)

As for the Gallifreyan math... Obligatory Lawrence Miles reference: in "Interference" (book 2, I think) the eighth Doctor uses Gallifreyan written maths to create a fold in time. It has been argued that the twelfth Doctor might be doing the same, trying to engineer a backpack door into wherever Gallifrey is now, beyond the "crack". Presumably, Heaven.

None of which is to detract from the fact that this made me laugh. A lot. And on second viewing too. The sword v spoon fight is very Doctor Who. As is staging a genuine peasants' revolt and overthrowing the feudal tyrants. Nice nod to Troughton. The Sheriff is a hit. Clara is much more than a pretty dress. Robin is a true hero. Oh yes, and the Doctor is a hero too.