I am sure that you can guess just how THRILLED Daddy Richard would be to receive a really POSITIVE and HEART-WARMING message from the General Secretary of the Hard Labour Party.

Unfortunately, that's NOT what arrived in the post this week. Instead, and before the General Election campaign has even started, Hard Labour are already so PANICKED about the Liberal Democrats that they are using NEGATIVE CAMPAIGNING and DISTORTION to attack us!

So, once we'd peeled Daddy off the ceiling, we persuaded him to write a THANK YOU note, and maybe ask one or two little questions for clarification…

Thank you for the direct mail that I received from the Labour Party under your imprint on Wednesday 17th March with the headline "Lib Dem Leader: Thatcher Was Right".

Having read the full story, I now know that the correct quote was that Mrs Thatcher was right to take on vested interests. Mr Clegg continues that in her day this was in the form of the over-powerful Trades Unions who had caused so much disruption during the so-called "Winter of Discontent", and that today we should be taking on vested interests in the form of City bankers.

In 2007, Gordon Brown as Labour Leader and Prime Minister invited Lady Thatcher to Downing Street. He appeared on the doorstep with her and said that he admired her. He said:

"Whatever disagreements you have with her about certain policies […] we have got to understand that she saw the need for change."

I should therefore be grateful if you would answer me the following questions:

I look forward to your reply, and shall be happy to forward it to the London Evening Standard and my local East London Advertiser, as I have with this letter.

PS: I assume that there will be no complaints from any member of the Labour Party about the use of bar-charts by any other Party since the one that you use on the reverse of your flyer so clearly distorts the relative percentages. I also see you have used the national average vote; were you perhaps afraid to use the ones for your formerly-safe seat in Tower Hamlets?

And here is the offensive… sorry offendING leaflet: 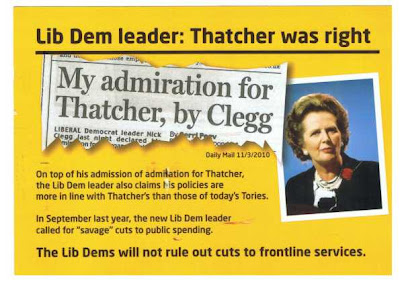 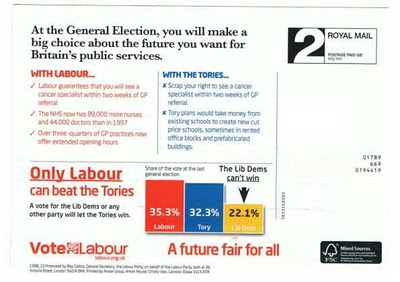 Incidentally, Chicken Yoghurt may have gotten there first with a very similar story.


Meanwhile, in COMPLETELY UNRELATED news, today Mr Balloon will – according to Conservatory Home – "invoke the spirit of Thatcher…" (this probably involves thirteen BLACK CANDLES and an unlucky GOAT – maybe Lord Pigby Jones or similar) "…in challenging the vested interests in the unions - and the big banks"

Hang on, that's practically a DIRECT QUOTE of Captain Clegg!

What does this involve?

"I can announce today that a Conservative government will introduce a new bank levy to pay back tax payers for the support they gave and to protect them in the future."