At the risk of incurring Auntie Jenny's FANGIRL-ENVY, I've been to see Mr Dr Vince "the Power" Cable.

He was here in Tower Hamlets to boost the local party and particularly our excellent candidate, Mr Ajmal Masroor.

Bethnal Green, currently fiefdom of Mr Gorgeous Pussycat George, leader of the Respect-the-Leotard Party, is one of the most deprived Boroughs in the country and yet it lies directly between the glittering riches of the twin towers (of wealth) that are the City and Canary Wharf or, as Mr Professor Tolkien might probably not have put it, Minus Morals and Minus Money. 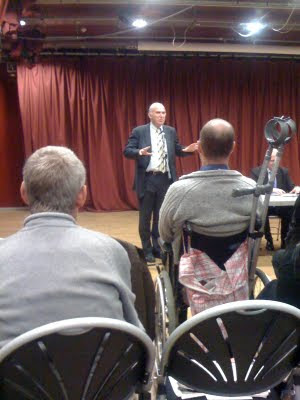 Mr Dr Vince explained a bit of how the economy has had a massive HEART ATTACK, and how the treatment was massive injections of medicine, or "MONEY" as it is called in banking circles.

The GOOD news is that the patient survived.

The BAD news is that there is a lasting legacy of damage done.

For a start, there's the legacy of rising unemployment, expected to top three million and particularly impacting young people and ethnic minority men.

Then there's the legacy of bad banking, with good businesses unable to get credit because the Smaugs in the City want to sit on their hordes not invest them: for example, the RBS or Royal Bank that WE Saved, is actually lending LESS in the last few months.

Asked how it is that collapsed banks have the wherewithal to pay out bonuses, he said that they shouldn't be. These bonuses are just jarring. Clearly there are two different types of banks: the plain and simple cases like Northern Rock, like HBoS, where the taxpayer has stepped in and rescued them. Clearly they shouldn't be in any position to do this. But then there are also the other sort of banks, including Goldperson Sachs who have caused such a fuss this week, who have not been saved DIRECTLY but have nevertheless benefitted SUBSTANTIALLY at the taxpayer's expense: from the perception that – post Lehman Brothers – no matter how badly they fluff up, Governments will be forced to bail them out rather than risk another atom bomb type blast wiping out what's left of the world economy; to all the money they are making by brokering and marketing the very I.O.U's that the Government has had to issue to pay for rescuing the OTHER banks. It's just WRONG that they be allowed to operate on this basis.

"The banks know they can't fail so they take excessive risks," protested one member of the audience, "and then they pay bonuses based on one year's performance that reward those very risks!"

"You've correctly recognised the problem," said Mr Vince, sagely. This is the very problem that the G20 drew up new rules to address… it's just Mr Frown's Government that is being slow to do anything about it!

Which of course brings us to the legacy of wrecked government finances, with income right down and spending on benefits spiralling up, which is why it is so necessary for a proper PLAN with key objectives of preserving frontline services, the things that Government MUST do, while cutting back on the things that Government should NOT be doing which in the short term means things like not replacing Trident, but also continuing cuts like cutting benefits for people earning fifty-or-more thousand pounds and then more painful things like looking at freezing public pay.

But he also wanted to be POSITIVE, to note that even if Hard Labour have smashed the economy, there are still things we can do to rebuild, starting with an urgent programme of building much-needed social housing.

At a time when much of the building industry is actually being mothballed and leading to unemployment, there is also a chronic shortage of affordable and Council homes. Obviously, we should be bringing these two together, fixing two urgent problems at once. And many building firms have found themselves with large empty blocks of flats, costing them money to keep empty: we should be able to acquire these and take over them for social housing.

At the same time we need a focus on young people because they are being hardest hit by the recession, and we have to avoid another "lost generation", like the people failed by the Conservatories in the Nineteen-Eighties. Instead of squandering ten billion pounds on a VAT cut, most of which has just disappeared, we would have put that money into guaranteeing young people a job within ninety days.

I piped up with a question about Mayor Bojo the Clown's new above-inflation hikes in tube and bus travel for Londoners: is this DAMAGING during a recession or a NECESSARY investment?

Mr Vince admitted that there was a bit of a "torrid" time ahead for public transport: it needs a lot of money investing in it, and where is that money going to come from? We supported the principle of Congestion Charging at the time it was introduced, and we support Crossrail, so long as it stays within its budget, because it's a good project.

I think that was a qualified "yes" to "necessary investment", though I'd add that Mayor Bojo would have less of need to hike the Central Congestion Charge by 25% if he wasn't simultaneously abandoning the Western Extension.

Mr Ajmal also reminded people of the suggestion from our London Assembly members to adopt a system like they have on the continent where if you bleep your Oyster Card for ONE bus or tube journey, within a limited time if you change to another bus, or from DLR to tube or the like, you don't get charged for a SECOND journey when you've really only made the one.

The audience actually seemed quite KEEN on the idea of the "mansion tax", perhaps easy to see why when our society is becoming increasingly UNEQUAL, unequal in income AND unequal in wealth. One of our key proposals, Mr Vince reminded everyone, is to lift a great many people out of tax, and to cut taxes for all lower and middle income earners, by shifting the burden of tax to those who can afford to pay more. At the moment, even a relatively modest family home can cost seven or eight hundred thousand pounds but will pay the SAME in Council Tax – tax band H – as a thirty MILLION pound mansion. When most countries, and even American cities like Washington and New York, have a property tax of this kind, so it's not exactly cruel and unusual punishment.

"Should you have told the rest of the Shadow Cabinet, though?" someone asked.

"Ah, well, yes it would have been desirable to have gotten my colleagues on board, and I've apologised to them for that," he admitted.


He didn't JUST want to talk about the economy, though, and he wanted to add some words about our distinctive Liberal Democrat PRINCIPLES.

He told us a little story: in his constituency of Twickenham, aircraft noise from Heathrow is a big issue. So Mr Vince recently went with a party of entirely-respectable middle-aged persons to throw PAPER PLANES at the Ministry of Transport as a protest. But before they could launch these "missiles", a police inspector turned up and told them they had five minutes to clear the street before he invoked the Terrorism Act!

We're also INTERNATIONALIST by nature; we opposed the invasion of Iraq because it was ILLEGAL under international law. Now there is Afghanistan. At the time of the attack to deal with the Taliban government and their support for Al Qaeda terrorists, we AGREED with that necessary, proportionate and finite action. But now we have to question whether there is any proper PLAN to what we are still doing there and, if there is, how we are supposed to achieve it, and if our soldiers have the equipment and supplies they need to do what we ask. Because the alternative is that we are now trapped in an open-ended commitment to support a corrupt undemocratic government that is in power on the back of a fixed election.

One thing that was interesting was that the audience, a relatively even mix of people from different ethnic backgrounds, were more concerned about Iraq… and IRAN… than they were about MPs' expenses; the one question on the expenses scandal seemed to draw little interest (though there was laughter in response to Mr Vince's remark: "I saw I was on the list of 'angels'; looking at who else was on the list, I thought 'the criteria for admission to heaven have been relaxed a bit!'."), whereas there was much discussion of human rights abuses from Afghanistan to Burma, from China to Palestine.

The third principle Mr Vince chose to emphasis was ANTI-RACISM. He remembered his late wife, who was coincidentally Asian, and how at the time of Mr Enoch Powell's speeches she had to stay off the streets for safety. He also remembered that, even though he had been in the Labour Party at the time, it was always the LIBERALS who stood up for minority rights. We've made a lot of progress since then, but prejudice still remains and that's why we see the rise of the British Nasty Party and their ilk. Liberal Democrats believe that it is our DUTY to take them on, and where we take them on – like we did this year in Burnley – we BEAT them.


We finished with a question about why he ruled himself out of the leadership after Sir Mr the Merciless resigned.

"Well," he said, "I didn't rule myself out; I was ruled out. My colleagues said that they felt, after what happened to Ming, that they wanted someone from a new generation, and I might have thought that I was doing a perfectly good job running the party, but that was the choice that was made."

I think we all know that for all that he was VERY good as acting leader, he did have that magical aura of protection in the word "acting" that would have vanished quickly if he'd gone from acting to actual. But I thought that that was interesting because I had not heard the story told that way before. A tinge of regret? Perhaps.