Day 2988: For the Purposes of this Interview, I shall be a Donkey - Millennium "Donkey" Meets Howard Dean


You cannot have helped but notice that the Democrats of America have recently won a significant victory. The Internet plaid a big, big role in this victory, with Barry O drawing in 13 million supporters and over five-hundred million dollars through his website.

So we were very privileged to ask the advice of the man who very much led the way with his own campaign grass-roots campaign in 2003 and as chair of the Democratic National Committee: Mr Governor Howard Dean. 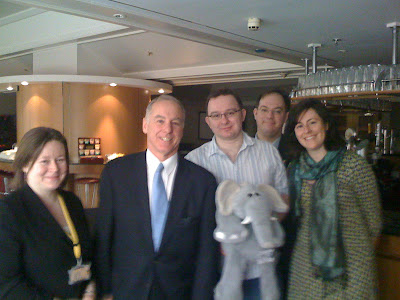 I was joined for the interview by Ms Helen and Ms Alix, along with Daddies Alex and Richard.

To warm up, I welcomed Mr Howard to the Liberal Conference and asked what the word "Liberal" meant to him.

Ms Helen asked about the Internet and campaigning. Describing the Internet as "the most democracy oriented invention since Gutenberg", Mr Howard was quite modest, and when he talked about how the Internet has changed people's engagement with politics in America, he said that it was the people writing the blogs and the websites that had done the changing – he and President Obama were just the ones who were quick to recognise that change and to adapt to it.

He spoke of the Internet as the tool that is EMPOWERING a new generation: "Where we had a million people march on Washington, you can send a million e-mails to congress (and crash their mail-server!)" he said. At the same time it opens up new ways to COMMUNITY politics, forming new links between local people and groups.

But more than that, the Net is also the best possible way to reach out to people in authoritarian regimes, in places like China or Iran, and bring them a fresh take on democracy.

Should we be talking to activists or to undecided voters, Ms Helen wanted to know.

"Neither," said Mr Howard, "You need to be CREATING activists."

Many more young people are travelling and serving their country in diverse ways today but what they don't do is connect that to POLITICS. Politics MATTERS, said Mr Howard, and not just to old Fuddy-duddies. It is the role of bloggers – that's ME and YOU! – to get our generation engaged and involved in politics.

Daddy Alex asked his "how are you different in one line" question. In an interesting reply-that-wasn't-entirely-a-reply, Mr Howard put forward the idea that the message relates more to the CAMPAIGN rather than the PARTY: for instance "change" was their message this time, and very successfully.

That is how you build up the relationship. It doesn't have to be the candidate in person, so long as it is the same face popping up so that the voters can see a relationship, and see how that leads to RESULTS.

Ms Alix talked to Mr Howard about the Fifty-State Strategy. To her, that seemed the exact opposite of the way Liberal Democrat targeting seems to work.

Mr Howard agreed that too much targeting could be a MISTAKE. You risk writing off whole sections of the nation or, as he put it in the most CRUCIAL remark:

"You cannot be a national party if you don't campaign everywhere in the nation. You'll never get someone's vote if you don't ask."

It doesn't mean devoting EQUAL resources, but it does mean devoting SOME resources to places where you are not (yet!) going to win. For what might be a relatively small investment you can have regional co-ordinators to link up activists and give people a "go to" place to find Liberal Democrats.

Speaking from the American perspective, he said how important it was that through President Obama's campaign people had become able to stand up and say "actually, I'm a Democrat" throughout all of America. We Liberal Democrats need to achieve the same thing here, so that peole can stand up and say "I'm a Liberal Democrat" and their friends will think, well actually it's okay to be a Liberal, and maybe the Liberals AREN'T all bad/irrelevant/gone the way of the dodo.

And now we must dash away to hear him speak in the main hall!

We DID try to tempt him into telling us what he thought about the OTHER political parties in Great Britain. But he was very DIPLOMATIC.